There are many reasons why I like to visit certain wineries.

When I was younger it was all about the party and the accompanying vibe a highly social tasting room brought to the fray. There are still times when that appeals to us and we embrace it.

Then there are times where a quiet, relaxing space with tremendous views is the place to be when tasting. A place where you can enjoy world class wine while just chilling.

The genesis of Gargiulo started when Jeff Gargiulo and his wife Valerie Boyd traveled to Napa in the early 1980’s to visit family and loved the area.

They dreamed of owning a winery and in 1992 it became a reality when they purchased their first winery on Money Road Ranch. Seven years later when they bought their second property right off Oakville Cross Road.

The Oakville appellation is widely acknowledged as one of the top Cabernet Sauvignon producing regions in the world, boasting neighbors such as Screaming Eagle, Groth, Silver Oak, and Bond to name a few. 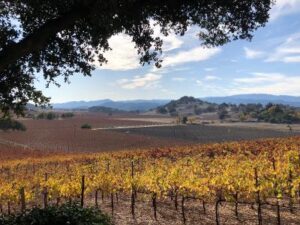 Jeff brought years of farming in Florida, as well as his business knowledge from being the CEO of Sunkist to the table and they have created a masterpiece, producing their first vintage in 2000.

Within a few years of their initial offering, my wife and I had our first taste of the Gargiulo experience.

To our surprise, it was Valerie that answered the door and the tasting was in their house. We enjoyed incredible wines and appetizers while sitting around the kitchen area of the Gargiulo residence.

After a while we moved out to backyard and enjoyed the spectacular views. After spending around two hours sampling wine and stellar conversation, we headed out, but not before having Jeff and Valerie offer us the use of their backyard should we want to stop by, have a picnic, and enjoy the view when we were in the area.

Since then we have enjoyed countless bottles of Gargiulo wines, but had not been back on the property until recently. There is now a tasting room, but most importantly, the family feeling we had on our first visit is still the same as our recent.

We were met by our host Lucas as we got out of our car and welcomed to the property. We got a chance to see the indoor tasting room which features the former gym floor from St. Helena High School.

We enjoyed a glass of their 2019 Chardonnay as Lucas gave us a tour of the grounds, including the stunning view of the surrounding vineyards.

While taking in the vistas, Lucas pointed out one of the adjoining vineyards is Screaming Eagle, a winery that produces a $1,200 bottle of wine.

After a nice walk around the yard, we went through the barrel room before walking back up the tasting deck which provides the same incredible vistas of the surrounding vineyards. 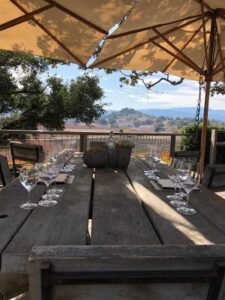 From there we went with the 2017 Money Road Ranch Merlot. I have never been much of a fan of Merlot, but the Gargiulo version has always been one I loved to drink and it is still true today.

Merlot is usually used as a blending wine and for that, it is harvested late. This vintage was not used as a blend, so it was harvested earlier. The result is a Merlot that would surprise a lot of people as a soft Cabernet Sauvignon.

Our next two tastings were side by side with the 2018 Money Road Ranch Cab and the 2017 G Major 7 Cab. While both were highly enjoyable, the differences were easy to taste. The two vineyards are no more that a mile apart, but express profound distinctions.

The Money Road Ranch vineyard is located on a softer soil that sits above the water table. The vines get all the water they need, thus producing a softer, more mild cab.

The 575 OVX vineyard sits on a more rugged growing terrain, forcing the vines to fight more to get what they needs. The result is a bolder, but still smooth bottle of wine.

The Money Road Ranch Cab is 100 percent Cab and is set for a February 2021 release so it is still not fully mature, but after tasting, it will be great bottle of wine.

The G Major 7 is 84 percent cab, blended with 10 percent cab franc, two percent petite verdot, and two percent merlot and is already a smooth, yet strong bottle of cab.

The last wine we tasted was by request and is our personal favorite – the APRILE Super Oakville Red. The wine is 96 percent sangiovese, with a blend of four percent cab to add a bit of weight to the palate.

It is, without a doubt, our go to Gargiulo wine!

The OVX 100 percent Cabernet Sauvignon is the premier bottle in the Gargiulo portfolio and despite the proximity to Screaming Eagle, it is one-quarter of the cost of Screaming Eagle at $300.

In fact, the Gargiulo collection features unheard of pricing giving the Oakville location. The G Major 7 is only $165 a bottle, with the Money Road Ranch cab at $110. The APRILE is just $55 a bottle, easily one of my favorite value-priced wines.

“It’s purely a passion project,” said Lucas of the Gargiulo production. “Last year was the first time we had raised our prices for the first time in five years.” 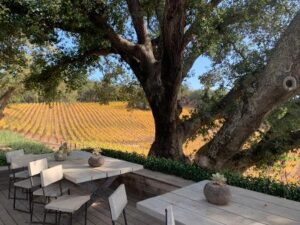 Producing 6,000 cases per year there is an obvious demand for the wine, with purchasing through an allocation system.

Our visit was certainly enhanced by Lucas, a knowledgeable and personable host. Along the course of the afternoon we also found out he was a fellow Chico State graduate – well removed from our grad year – but it just continued the family feel of Gargiulo.

One other aspect of Gargiulo that is often overlooked but is a big part of the fabric is music. Jeff is an accomplished musician and his band the Silverado Pickups, comprised of others in the wine industry, have played every year of BottleRock, the huge Napa musical festival.

Past performers during the Oakville Sessions have included musician Kelley James, a performer well known in the golf world as well and someone who has been featured in ACES.

As I have said in the past, with so many wonderful wineries in the Napa Valley it can be found, it’s tough to determine which three you will visit. If it is a relaxing afternoon with awesome wine and vistas, Gargiulo is the place.

Visits are by appointment only so please go to www.gargiulovineyards.com for more information on visiting or getting on the allocation list.