Editor’s note: We are reposting this  article to give readers some insight into the Alfred Dunhill lChampions being played this week at Leopard Creek.

I have watched this December tournament for many years and marveled at the views from the golf course of Kruger National Park that is across the Crocodile River. Last July, we had the opportunity to play at Leopard Creek for two rounds. Legendary South African golfer Gary Player designed the course which opened in 1996.

The private club has an atmosphere not unlike that of the Olympic Club in San Francisco. Gates tightly control who gets onto the estate that includes many home sites. The clubhouse is a classic South African design with thatched roofs and a distinct formality (a rigid dress code that requires long pants in the evenings and bans sandals—that’s saying something with summer time temperatures at 100 degrees or more).

The clubhouse includes a patio and grill for dining as well as a bar and a more formal dining room. The pro shop is well equipped and the rental clubs were a new Titleist set. And the locker room was all you would expect from a private club. 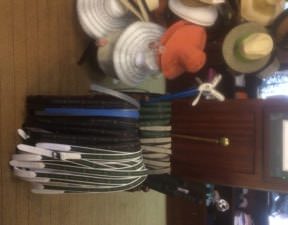 snake catchers are among the accessories

One of the more unusual accessories sitting in the rack with ball fetchers and umbrellas was a seriously large snake catcher. During many months of the year, you may see snakes along the golf course and the staff makes it clear that you do not want to try and find a ball that goes into the wild— a slithery thing with fangs could find you instead. 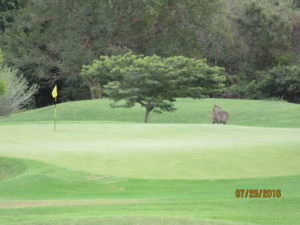 Wildlife can be found throughout the course and the sprawling club grounds and there’s chalkboard on the patio bar that records leopard sightings. The last one was on July 4 on the course.

Fairways on the front nine are generous and the course was in the impeccable condition you would expect—even though we were there in mid-winter and South Africa was in the middle of a record-setting drought.  Summer is the rainy season in that part of South Africa. We saw many dry river or creek beds as we drove into Kruger park.

One great feature was original metal sculptures of leopards that graced each tee area.

Gary Player designed water hazards on several holes including both No. 9 and

No. 18 that share the same body of water in front of the clubhouse. The finishing hole features an island green. It was giving the pros fits in the Thursday round.

The signature hole is the par 5 13th where you must drive over a creek that bisects the fairway and is a hazard along the left side of the fairway. The green is perched against the river, which flows about 100 feet below. That vantage point offers great vistas of the park as well as the hippos that like to lounge on far bank, as well as crocodiles in season.

If you do not know a member, you can get out on the course by staying at upscale lodges in Kruger park or near the golf course.

We stayed at Lukimbi, which has a license to operate a private reserve of 15,000 acres in the national park. The lodging was luxurious. Privacy is no issue in the middle of wilderness. There were no curtains in the bathroom that featured a huge stone bathtub for soaking, while looking out on the watering hole where the Cape Buffalo had gathered with some hippopotamus. 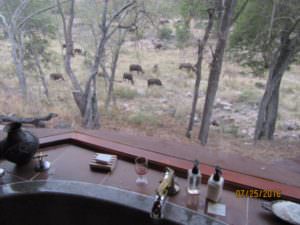 The view from the bathtub at Lukimbi

I enjoyed a relaxed drink on the patio of the main lodge with the same view before we had an amazing dinner with a wonderful red wine that was a blend (I let the sommelier choose from the cellar that easily held 1,000 bottles).  Read more about South African wine country.

We enjoyed many fine South African wines on this trip, but this made a very short list for me of memorable bottles along with a French burgundy in Geneva and a St. Emilion from Bordeaux in Paris. It was that special and, thanks to the exchange rate that was 14.5 Rand to the dollar, it was $60 (typically the exchange rate has been 8-to-1. 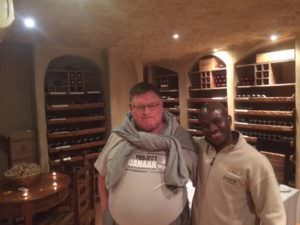 The sommelier, the author and the well-stocked cellar where you can dine

The golf was a pricey experience—about $250 for the round plus another $50 for the rental clubs, but it was a bucket list item. http://leopardcreek.co.za/

Earlier on the same trip, I crossed another item off that list when we played another Gary Player design, the Royal Swazi in Mbanne located in the Ezulwini Valley of Swaziland. I have stayed in the adjacent hotel on each mission trip to Swaziland, but this was the first time we set foot on the golf course.

Sadly, the drought had taken a major toll. Only the tees and the greens were irrigated so the fairways were simply dried up Kikuyu (an African form of Bermuda grass). We hired a spotter who also read greens for us. It was a good move because we would have been lost after the second green.

The course is set on a hillside so there are plenty of elevation changes and you are playing uphill or downhill. Given the dry conditions, there were plenty of times when a low punch shot ran a long way.

The back nine particularly takes advantage of the terrain. No. 10 plays over a gully uphill to a green on the hillside, while you drive back over the gully to tee off over it for No. 11. Incidentally, the snake warning sign is particularly daunting—it features a drawing of a cobra ready to strike.

It would be great to experience the course in its normal condition because Player designed a championship track. It has hosted Sunshine Tour professional events.

In sharp contrast to Leopard Creek, the pro shop is not set up to accommodate visitors (the course is one feature of a resort hotel and spa). The pro scraped together three sets of clubs that dated back to pre-titanium days. The clubhouse was serviceable, but little above the normal American muni.