It was a big day for the leadership of The Club at Castlewood when they gathered April 23 for a low-key groundbreaking ceremony at the swimming pool.

With a huge excavator parked next to the soon-to-be-razed tennis and pool building, they celebrated another milestone in the club’s journey to rebirth itself from a golf facility to a family-oriented country club. Several people described their feelings as “excitement” and said the general membership is buzzing about the project. 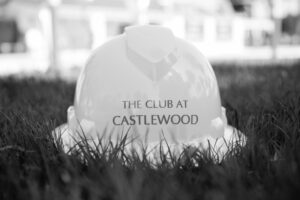 Kathleen Stone, a board member, celebrated the beginning of work by noting she’d been working 4 ½ years for this day. The pool building was knocked down and will be replaced by a 3,700-square-foot sports center and grill that will serve the tennis courts, the bocce courts, the two new swimming pools and the patio dining areas.

Since the membership voted last May to reject a takeover offer from The Bay Club (owner of the former ClubSport facility), a select committee has been working to plan and design the renovations of the 1970s era clubhouse as well as the new sports center. They released the plans in mid-December after meeting weekly for a few months.

The committee then was narrowed down to four members professionally involved with construction that drove the selection of a project manager, the bid process that resulted in W.L. Butler Construction receiving the contract. This group met for 2-3 hours at least once a week to move the process forward.

In addition to the excavator parked on the pool deck, Butler has installed temporary fencing and its construction trailer around both the clubhouse and the pool area. The club is operating out of two portable buildings in the lower parking lot.

Castlewood also benefited from the pandemic-driven boom in the game of golf. The board had expected membership to shrink each month over the last year and it’s been just the opposite club president Rich Barraza told me. Not only has membership held steady, but the club has also added new members who realized how desirable the club will be once the project is finished.

Castlewood announced its rebranding to The Club at Castlewood to more accurately capture what they hope its essence will be. The club dates to 1924.

The remodel includes many key elements:
* The existing second floor grill will be transformed into a 2,700-square-foot fitness center with an 800-square-foot studio for yoga or Pilates. It will overlook the first fairway.
* Creating a new entrance for members into a lobby and bar with views through the lobby and onto the first fairway. The main entrance will be for members only, with people using the event space entering on the east side off the patio. The plan refreshes the large event room and the adjoining bar as well as adding outdoor seating on the patio. It hasn’t been updated since it opened in the 1970s.
* The member dining area and bar will be indoor/outdoor experiences with permanent overhangs with gas heaters. A new patio will transform an open concrete area next to the entrance into a usable patio area. The U-shaped bar will seat 32 people looking at the first fairway.

*The event space will be refreshed and will include six portable workstations with high-speed internet, so members have an efficient space to work when they are using the club.
* Two elevators will be added so people with disabilities can easily move around the club. Restrooms also will be accessible.
* A new private dining space for 32 with cigar and wine lockers.

* Childcare will be offered in the clubhouse.

* New locker rooms as well as lounges for men and women.
* A bride’s room that will double as a treatment room when it is not used for weddings. Currently brides use the women’s locker room to get ready — it can be a challenge when her father wants to check in with his daughter.
By Tim Hunt