By the time most of you are reading this, chances are The Players Championship is underway at the TPC Sawgrass.

Though not a major, the players view it as one of the top events of the year, calling it “their championship.” There is always discussion of the tournament being “the fifth major,” but I like it where it is, leaving just the four majors.

The tournament is taking place in March and before the Masters this year as opposed to May and after the first major. The tournament was held in April before moving to May in 2007. 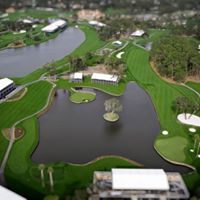 The move back to April allowed the PGA to move from August to May.

It’s also one of may favorite tournaments to watch each year, one I set time out of the day to have on in my office and enjoy while I try – mostly unsuccessfully – to work.

But what makes this such a great tournament to watch every year? Plain and simple, the course. Opened in 1980, it is classic Pete Dye, who along with Alice Dye, Jerry Pate and Bobby Weed are given design credit.

The final three holes are as a good as it gets, even on day one, but especially so with the tournament in the balance. For my money, they are the top finishing holes on tour and along with the TPC Scottsdale, the most fun to watch, albeit for entirely different reasons.

Scottsdale is just fun with some peril, while Sawgrass gets the rear-end puckered when playing those three holes.

Let’s run through the last three and what makes them so special. 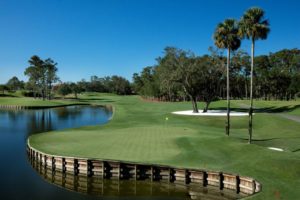 No. 16 (523 yards, par 5): The last realistic scoring hole for the players so if you are down a stroke or two, you need to get something here, then hope not to melt down on the last two holes. Most players can get home in two here, but there is lateral water down the right side for the second shot. There is a cluster of oak trees blocking some of the left side, leaving a potentially demanding second shot. You can layup here and some are forced to do so, but the landing area to layup is painfully narrow, leaving going for it in two the safer play. You want to win, get no more than a four here. 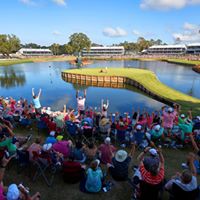 No. 17 (137 yards, par 3): Sounds simple, but far from it. The island green can bring the best players in the world to their knees. Think about it – 137 yards with a teed ball. That should be a walk in the park, but it has turned into one of the toughest tee shots in golf – well until No. 18. The atmosphere around the hole rivals No. 16 at the Waste Management Open but is a much tougher play as there is no bailout available for the players. Throw in the tricky winds and the party is on! The worst year statistically came in the first round of the tournament in 1984 where wind gusts of up to 45 miles per hour resulted in 64 balls finding the water and a stroke average of 3.853 for the day. There were only 11 birdies in the first round. 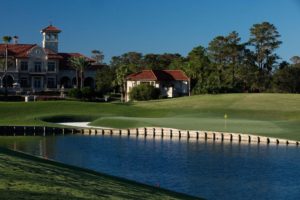 No. 18 (462 yards, par 4): This dog leg left with water down the entire left side of the hole makes for one of the toughest tee shots in golf. For a visual, compare it to the 18th at Pebble Beach. Standing on that tee with less than a three-shot lead must make the muscles tighten. There are trees and spectator mounds down the right side, but that is easily preferable to the water on the left. It’s almost sinisterly enjoyable to watch the number of shots blocked to the right as the players do whatever they can to stay away from the water. The play is to throw caution to the wind, but that’s an easy thought process for a mid-to-high handicap golfer sitting on their couch at home!

Because of the near major status granted to the tournament, the field is always among the best of the year. Following are some of the Thursday marquee groupings. The tee times have been adjusted to West Coast time.

The tournament always lives up to the hype so make sure to spend some time planted in front of the TV Thursday and on Sunday, while you are enjoying your green beer and Irish food, make sure to sit back, relax and watch the tension as the leaders play the final few holes!