Celebrity Chef Michael Mina owns more than thirty restaurants, spanning a wide variety of culinary concepts throughout the world and then there’s Bourbon Steak at Levi’s® Stadium in Santa Clara.

It was a new challenge. Ten or more times a year, he offers a members-only, upscale tailgate party, but for the larger part of the year, his team operates the Bourbon Steak fine dining restaurant as well as the Bourbon Pub – with a more casual approach.

A couple of team members described the challenge of the two restaurants plus additional event space for up to 200 as “a beast.” It’s also a concept that Mina is pioneering. You can’t find another fine dining restaurant open nightly within a stadium.

When we dined at Bourbon Steak, the restaurant was just starting its third week of operation. Amazingly, the team already had meshed and they provided the type of excellent service that would be expected of a fine dining experience. 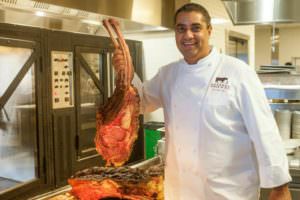 What was striking was how the designers had tuned the restaurant for a stadium location. That included much of the wait staff wearing black Levi’s® jeans and touches such as tan-upholstered chairs bore a definite resemblance to stadium seats, while the water was poured out of one-quart milk bottles (In the pub, the water classes are pint canning jars). The mirrors in the dining room are flat screen TVs on game days.

The clientele and their attire was quite different from lots of fine dining establishments. It ranged from 49er fans, in full game attire presumably coming in from tours of the stadium and the museum to Silicon Valley business people in khakis or blue jeans to couples out for special occasions. I do not think I saw a tie or a suit on a guest.

The atmosphere is perfect for the casual dress of the Silicon Valley and likely will become a popular spot both for celebrations or critical business meetings as well as more casual corporate gatherings in the tailgate space.

Each Bourbon Steak location features various cuts of steak, matched with locally sourced, seasonal ingredients. For the Levi’s® location, the steak offerings have been broadened significantly from what is offered in San Francisco or Scottsdale.  In addition to the certified prime beef, cuts of American Wagyu (the U.S. version of Kobe) – Snake River Farms Rib Cap, 8 oz. (MP); there also is the option to order boneless Filet Mignon, Prime Ribeye, Bone-in Filet, Dry Aged Porterhouse and Dry Aged Tomahawk. 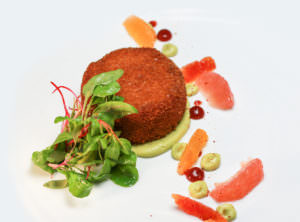 The menu also includes Alaskan Salmon and Butterfly Branzino as well as Gulf Shrimp, Half Main Lobster and King Crab Oscar. One of the signature dishes is the Maine Lobster Pot Pie that arrives in a huge puff pastry with the tail, claws and knuckles of a two-pound lobster cooked inside in truffled brandy cream sauce with summer vegetables. It is on my very short list to try on a return visit. Watching the server separate the tail from its shell had my mouth watering.

Here’s the report that I filed in September 2014.

Instead of ordering from the menu that includes the expected cold shellfish, some innovative starters and salads, we opted for the tasting menu ($125 with paired wines $50). In one word: sensational. The tasting menu with wine pairings also offered Chef Mina and Sommelier Robins the opportunity to take us on a culinary tour—wines came from seven countries on two continents (Europe and U.S.). All are poured by the glass.

We started with a flute of crisp champagne, Chartogne-Taillet Cuvee’ Michael Mina from France. It is one of the two proprietary sparkling wines—the other comes from the Green Valley near Vacaville. 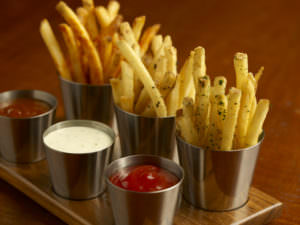 The meal began with the Mina’s signature French Fries paired with three dips that is the starter for all guests. The potatoes are fried in duck fat because it has a high smoke point so less fat is absorbed. A house popover roll followed.

Michael followed with one of his signature dishes, Tuna Tartar—Ahi tuna with pine nuts, Scotch bonnet and sesame, mixed together table-side with a quail egg yolk and sprinkled with Ancho chili dust. The dish is typical of those found across the menu—a variety of tastes and textures. Something crunchy was included on every plate. The wine pairing by Sommelier Adam Robins was a German Riesling (Robert Weil Tradition, Rheingau, 2012). The slight sweetness of the wine cut through the rich tuna and toned down the heat from the chili.

One of the highlight dishes of the night followed—the Mina take on Crab Chippino:  Dungeness crab with shaved fennel in a tomato-saffron broth. Adam paired a Spanish Albarino (Bodgeas La Cana Rias Baixas) that is grown and made near the ocean on the northwest coast of Spain. The proximity to the ocean is such that the wine is known for its acidity. It complemented perfectly.

The salad course was heirloom beets (red and yellow) over goat cheese with pistachio crumbs (crunch) dressed in a golden balsamic dressing. It was paired with a California Sauvignon Blanc by Manifesto from the North Coast. The beet dish was wonderful and the pairing is traditional in France with the cool earthy beets matched with a crisp wine.

We then moved on to a traditional fish course—sea bass with blackened skin over fava beans and an artichoke heart with shaved fennel that was  paired with a French chardonnay from the Burgundy region, Bouchard Beaune Beaun Du Chateau 1ER Cru. I was ready for more of the high-acid wine—it complemented the fish well thanks to the terroir that produced the mineral character of the grapes and the wine.

We then moved to the centerpiece of a restaurant with “steak” in its name—the beef.  We were served slices of the Snake River Farms rib cap and the Miyazaki New York strip from Japan accompanied by a tempura-fried shitake mushroom (crunch) over sautéed mushrooms. The pairing was a Lewis Cellars Mason’s Napa Valley Cabernet from 2012. Given its youth, the wine was drinking superbly—another wine that begged the question: please can I have some more? The superb beef was just that. 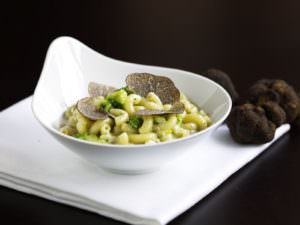 We then eased into two more courses—cheese and dessert. The Cavatina goat cheese was accompanied by a Moscato D’Asti, Saracco from the Piedmont region of Italy.

What followed was a surprise with two desserts—chocolate paired with a Portuguese Madeira from the Rare Wine Co. in Boston. For me, there was a delightful panna cotta and sponge cake that was paired with a Tokaji, from the Royal Tokaji Wine Co. in Hungary (vintage 2008).

Bottom line, the tasting menu with wines is a sensational dining experience. That said, you could not go wrong with a seafood appetizer, a salad and a steak or simply a steak and sides.

It is all excellent.

One unique feature where the sommeliers had some fun is the “Serendipity” list that matches premium vintages with notable events in 49er history. For instance, Eddie DeBartolo’s purchase of the team in 1977 is matched with a Beaulieu Vineyard Napa Valley George De LaTour Napa Valley cabernet sauvignon, while Dwight Clark’s “The Catch” in 1982 is celebrated with a selection of three French Boudreaux from that year (ranging from $580 to $950).

As noted by the age and the price points, these are very special occasion bottles, but fitting for ‘Niner history. The last entry is the team’s last Super Bowl championship in 1994.

Here’s hoping the 49ers capture the Super Bowl so the Serendipity list can grow with more recent and less pricey vintages. Of course, the list starts with the team’s move from Kezar Stadium to Candlestick in 1971—the move to Santa Clara should qualify as well once wineries start producing 2014 vintages.