Finding an excellent seafood meal somewhere other than at Fisherman’s Wharf seems like an oxymoron in San Francisco, but that’s exactly what the Catch provides in the Castro district.

Located at 2362 Market St. in the heart of the Castro district, it’s on a busy block with a gay strip club, other restaurants and other businesses. Once you step inside, the bustle of the street fades. In the entry hangs the original AIDS quilt and there’s a picture of gay icon Harvey Milk in the bar. 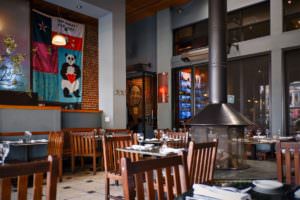 There’s a patio with suitable tables and chairs surrounding a fireplace that can be open to the street during daytime hours. The dining room proper features a bar on one side with wooden tables and chairs making up the dining area with the open kitchen running on the other wall.

The kitchen, rightly, should be featured because the food we enjoyed was excellent. The restaurant features a seasonal menu that changes weekly as well its staples. Seafood is featured on both menus.

When we dined early on a Sunday evening, the weekly menu featured a Petrale Sole and Red Snapper Ceviche to start ($16) with entrees of grilled day boat scallops and tiger prawns over red and white quinito ($32); pan-seared fresh Alaskan halibut over a tarragon risotto with artichoke hearts, kale in a Moroccan mint sauce ($32) as well as grilled skirt steak with parmesan spinach potato gratin with grilled asparagus.

The regular menu includes seafood cioppino branzino, black cod, striped bass and wild salmon as well as short ribs a vegetarian risotto and a chicken breast. This is a kitchen that excels at the seafood that its name implies. 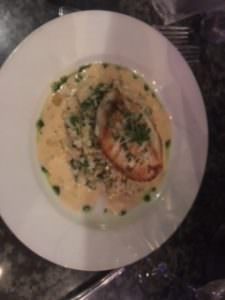 As tempting as the main menu was, we could not pass up the specials. I opted for the tiger prawns and day boat scallops. I do not remember ever eating larger scallops that were seared so they melted in your mouth. The prawns were equally large—two of each was a fine portion over the tasty mixture of red and white quinoa spiked with pieces of butternut squash.

My bride selected the pan-seared halibut over the risotto flavored with tarragon. Normally, she is no fan of tarragon, but she was using the bread to mop up the sauce. The fish filet was prepared perfectly so she was simply delighted.

We passed on both appetizers and desserts. Looking at a nearby table, the fried calamari with green beans was so large that it was designed to be shared.  Appetizers also included oysters (cold on the half shell or grilled); pan-fried scallops; French fries, Ahi tuna poke and sautéed mussels.

The service was quite attentive—we’d come from a Cass Winery pick-up party in the afternoon with a bottle of Roussanne that needed more chilling. An ice bucket came to the table and the server circled back several times for minor pours until the wine reached a suitable temperature. That level of service earned a better than average tip.