When writing the history of farming in Sonoma County’s Alexander Valley, it starts with the Young family.

The Youngs have farmed 448 acres in the northeastern end of the valley for more than 160 years and now are celebrating the seventh generation of family members to work in the farming and winery operations.

We had the pleasure of visiting the historic property on a quiet May Monday having enjoyed an open house at the nearby Hafner Vineyards the day before. Dick Hafner, the founder of his winery, relied on Robert Young for advice as he removed peach trees and planted grapes more than 50 years ago. We concluded our day with a tour of the 50-year-old Jordan Winery located a few miles east on Alexander Valley Road.

Living in the Livermore Valley, we’ve known the Wente family for decades and seen it move into the 5th generation of family members working in the business. The Wente brothers founded their winery in 1883, 25 years after the Youngs moved onto the Alexander Valley property to grow prunes.

It is notable that the University of California Davis enology program regards the Wente Chardonnay Clone and the Robert Young Chardonnay Clone C17 as its premier achievements. Because the Alexander Valley is farther from the ocean and its cooling fog and breezes, its clone was specifically developed for warmer weather. The location is also remarkably similar to the best Cabernet Sauvignon growing areas of the Napa Valley.

Tasting a variety of wines—Robert Young makes 17 different wines among its 6,000 cases—and visiting with founder/owner Fred Young and Karen Maley, general manager, the family pride shows through. The Youngs are about relationships, whether with fellow growers, people in the industry or patrons.

Peter and Rachel Young purchased the land in 1858 having been drawn to California from New York by the Gold Rush. They raised Silas who took over the ranch when Peter died in 1914. In 1935 during the Great Depression, Silas died leaving the farm to 16-year-old Robert. The bank called the $70,000 note on the property. Robert turned to his great uncle Thomas Meeks who was wealthy. He guaranteed the loan and the Youngs continued to farm prunes. Robert paid the loan back in full. 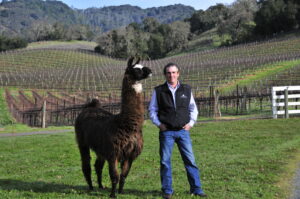 Robert, an innovator at heart, had developed both a mechanical picker for the prunes and a custom-made dryer. When they decided to switch to grapes in 1963, he sold it to a South African who complained he could not make the machine work. Robert traveled to South Africa and discovered, according to Fred, that the heater was installed backward. That trip started a relationship that has seen many South African young people travel to the Alexander Valley to help during the harvest season in the decades since.

Another long-term relationship started when Robert was in Washington D.C. on a lobbying trip and met a winegrower from the Finger Lakes region of New York. The New Yorker’s room reservation had been cancelled so Robert invited him to stay with him. Their chat led to a discussion about the winery he was starting and Robert said he’d like to see it. He flew out and saw an area that was like Sonoma in the 60s and 70s. Young agreed to plant the vines and buy the grapes and the New Yorker would farm it for them. That led to a partnership in the vineyard that lasted until they needed cash to cover an inheritance tax.

It is notable that Robert Young was the first grower to plant Cabernet Sauvignon in the Alexander Valley. It is now the dominant varietal in the valley.

The Youngs sold their grapes to other wineries for years, including Chateau St. Jean. Dick Arrowood, the winemaker there, liked the Alexander Valley chardonnay so much he made the first single-vineyard designated wine back in 1973. And, when Fred saw how much money was in actually making wine, Arrowood volunteered to give him a hand. Initially, Fred traveled the country to try to build his own distribution system instead of relying on the wholesalers who take a big cut. A winery friend advised him to sell directly to the consumer through a wine club and that approach has been great for the winery. In the last three years, production has doubled from 3,000 to 6,000 cases as wine club members have significantly increased. 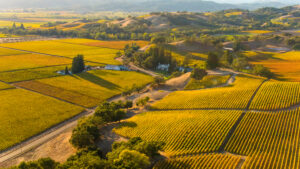 Robert Young makes three chardonnays, five cabernets plus red blends as well as a crisp Sauvignon Blanc and a rose of Malbec. The Scion tasting room sits atop a bluff and provides wonderful views over the hillside vineyards as well as the Alexander Valley floor. It’s a delightful spot to hang out with comfortable chairs inside and outside on the patio. Like many wineries, they have moved from a tasting bar to a seated experience with tastings guided by a knowledgeable employee pouring the wine. Manley said they’d also learned that patrons will pay for a good experience with good wines.

We started with a crisp Sauvignon Blanc that stood alone well and also would pair with food. It’s an excellent sipping wine for a warm summer afternoon. We enjoyed the estate-grown Chardonnay, a wine Karen said is a favorite at Willi’s Seafood and Raw Bar on the Healdsburg Square—she delivers a couple of cases weekly. They only sell to two restaurants.

We then tasted Rachel’s Rose, a tribute by Rachel Taylor to her great, great, great grandmother who homesteaded the estate in 1868. She’s a winemaker in training and the sixth generation.

Moving on to the reds, it’s notable that the winery makes not only five Cabs and Bordeaux blends, but also bottles Cab Franc, Merlot and Malbec as varietals. The current release Cabs are all 2018 vintage. My favorite was the winery’s flagship, the Scion, which is 79% Cab plus Cab Franc, Petit Verdot and Merlot. The Thomas Meeks Cab, named in honor of the uncle who guaranteed the loan during the Depression, is naturally fermented using the yeast that is present on the grapes. No yeast is added. That removes control from the winemaker but results in a high-quality Cab. 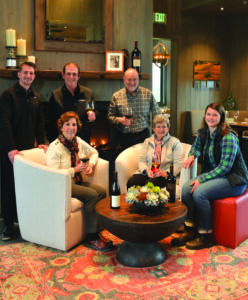 We finished our time with sandwiches and Cabs under the big oak tree in the middle of the Bob’s Burn Pile block that is made into a single-block Cab. It’s designed for special occasions and available as a tasting option.

When you drive into the tasting room parking lot, you cannot miss the plaque there honoring the firefighters who helped save the bulk of the winery when it was ground central in the Kincaid fire in 2019. You can see the burn on a large madrone team a few steps below the parking lot, while Fred pointed out two stumps of what were once 14 large redwood trees. He was awakened in the dark of the morning by his son who told him to get out now—the fire was cresting a hill north of the vineyards. They were up all night and day fighting it before the high winds settled down so they could bring water to bear on burning trees.

Firefighters used their property as the mustering point. They had plenty of water with seven lakes on the property and a large generator that came in very handy when PG&E cut the power. Now they’ve installed solar panels to provide more of their own power. Looking back, Fred was thankful to those who helped save the winery as well as the good luck that 91% of their grapes had already been picked so they only lost some of the Cab grapes.

Thanks to wise planning by Robert Young the vineyards and the winery are still in family hands and should remain there for generations to come. For Fred, it’s all about lifestyle and legacy. He loves waking up and not knowing what the day will bring. He is farmer, vineyard tender, equipment repairman and enjoys his wines and the beautiful place he manages and keeps in his family.