A golfing trip to the inland Pacific Northwest is requires a visit to the Coeur D’Alene Casino, Resort and Hotel and its Circling Raven golf course in Worley, Id., about 30 minutes south of Coeur D’Alene.

The resort is complete with a variety of lodging choices, full spa services and all the casino gaming you could want, but it is set apart by the uniqueness of its golf course.

From the tee on No. 1, the Circling Raven golf course doesn’t appear unusual—wetlands with aspen trees to the right and a forced carry over wetlands that also border the left side of the fairway. Aside from the forced carry, it’s a reachable par 5 at only 513 yards from the tips.

Finish No. 1 and drive through the tunnel under the railroad tracks to the second tee and it becomes apparent how unique Circling Raven is as a golf course. From the tee on No. 2, the rolling hills of the Palouse unfold all around you and you can see the mountains that separate the Coeur D’Alene Indian reservation from Lake Coeur D’Alene. You can see part of No. 3, but the view is the Palouse framing the vivid green fairways and white sand in the bunkers.

Hole No. 6 at Circling Raven

The Palouse is rolling hills characterized by fertile soil ideal for dry-land farming of wheat and legumes. It spans from northern Idaho to eastern Washington.

On Circling Raven, the views spark the feeling of being tucked into the woods with more wildlife visible than humans. It’s a delightful isolation. Designer Gene Bates had no significant limitations when he set out to route the course, so he found the terrain right for the hole and didn’t worry about how far it was from the prior green. This definitely is a golf cart course with paths covering 7 ½ miles,

And, once you go under the Union Pacific Railroad tracks after No. 1, you do not see development again until you drive to the tee on No. 9. On the back side, No. 10 is the only hole with the clubhouse readily in view. Nos. 11 and 12 feature views of the Palouse before the course dips back into the trees and the wetlands for most of the remaining holes.

Bates had a particularly good time with the challenging par 3s—all play downhill and require forced carries over junk. From the tips, they play 217 yards, 212 yards, 253 yards and 192 yards. The longest hole, No. 13, is bordered by forest on the left and right with 20-30 yards of grass between the edge of the wetlands and the green. Par is a good score on any of these daunting holes. 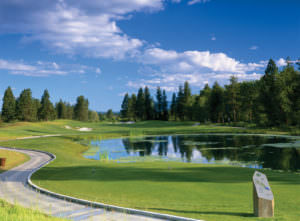 No. 17 features water off the tee

The golf staff says No. 8 is often seen as the signature hole. It’s downhill with no room to miss right and a hillside and open forest to the left once you clear the gully that is the forced carry from the tee.

The team at Circling Raven takes pride in its environmental stewardship. Only 100 acres of the 620 acres that the course covers are actively cultivated and the lands are home to wildlife such as a mating pair of Bald Eagles, a family of moose, coyotes, deer and many other types of birds. There have been mountain lion sightings as well.

Be sure to take time to check out the award-winning pro shop with architecture that mimics the original Old West style of the first hotel. It has four tree trunks running from the floor to the peaked ceiling and would be fitting in a dining room or lodge than a golf shop. 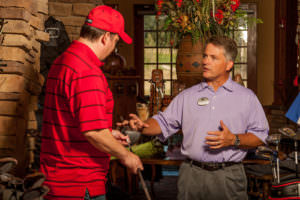 Head Pro Tom Davidson has been recognized as “PGA Merchandiser of the Year” for the quality and variety in the pro shop. He related how some local residents had outfitted their vacation homes with furniture and other décor items purchased from the shop.

The course stays in great shape because there only are between 22,000-24,000 rounds during the season. Demand is so reasonable that, despite the sun coming up at 5:30 in the morning, the first tee time is not until 7 a.m.

The rates are very reasonable for the quality of the golf course and resort. In prime season, you can play 36 for $140, $60 less than a single round at the Resort at Coeur D’Alene that is about a 30-minute trip away. Stay and Play packages start at $219 during the week that include golf for two players and lodging for one night.

The now-impressive Coeur D’Alene Casino, Resort and Hotel got off to a modest start as a humble bingo hall in 1993.

There were 90 original employees, most of whom never had held a full-time job. Since then, expansions with the casino, the two hotel wings, the spa and the golf course (seven major expansions in all) have resulted in a first-class casino resort. The Coeur D’Alene tribe now employs between 1,000 and 1,200 people depending upon the season. During prime season, the 300-room hotel is sold out most weekends and average occupancy exceeds 80 percent. 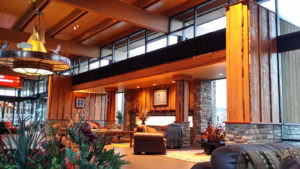 Adding the spa tower and spa building followed the opening of the Circling Raven golf course in 2003–a move that put the resort casino on the golfing map. It had the same impact that the Journey golf course at Pechanga did for that casino/resort—it made it a “must-play” for golfers traveling in Southern California. The unique golf course in Worley made the resort a destination, particularly for Canadians.

The overall facility has become an economic engine allowing the tribe to contribute more than $22 million to education as well as paying half of the cost of the public bus that connects to Coeur D’Alene and providing medical care to tribe members and others as well.

The 100,000-square-foot casino offers virtually any game you would expect, but there are wrinkles. Idaho state gaming law does not allow Blackjack dealers to handle real cards, so there’s a video game aspect to those games with a digital dealer. 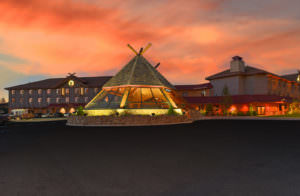 There are seven restaurants and bars on site that range from the Twisted Earth Grill in the golf shop to the more casual Red Tail Bar and Grill in the casino to Chinook Steak, Pasta and Spirits—the fine dining establishment. Twisted Earth also is the name of the third hole on the golf course where two fairways are bisected by an imposing group of bunkers. The name comes from the tale of a warrior who got lost on a hunting trip. Circling Raven was a legendary tribe chief.

Director Kurt Gomer and Executive Chef Steven Walk oversee all of the food-and-beverage operations. Gomey, a veteran of food-and-beverage management in gaming operations, knows how to tune the offerings to the clientele. Despite the abundance of fine wines on the Columbia River bench in nearby Washington and some fine Idaho wineries, wine accounts for just 5 percent of alcoholic beverage sales. The majority is beer or spirits.

He says that drinkers of fine wine routinely bring their own bottle and pay a modest corkage fee.

Some of their key constituencies are Canadian golfers who find the weather and the rates very appealing. That’s why on the beverage cart on the course, the only bourbon offered was Canadian favorite, Crown Royal—as opposed to the Jack Daniels you will find on most carts in the United States.

Steven Walk strives to utilize locally grown and sustainably produced ingredients. He sources organic wheat for their breads from a nearby dry-land farm that is a no-till farm. One of the house specialties is Squaw Bread. The Red Tail also features fresh salsa and chips daily as well as tacos with Bison chili.

Walk works with the Affiliated Tribes of Northwest Indians to source local meat, fish and produce.  Walk uses Northwest elk and Bison as well as Coho salmon from the Nisqually tribe on the Puget Sound and halibut from the Makah tribe. Typically, I do not enjoy salmon or other fish, but these filets were so fresh that I finished them and could have looked for more.

Over three dinners, we ate plenty of locally grown products that included the aforementioned fish, local Bison tenderloin, Elk stew, lentils, red potatoes and asparagus. The Palouse area, with its deep top soil, is ideal for dry farming lentils and beans, and the signature dishes in the area involve huckleberries.

The Chinook Steak Pasta and Spirits took off when Gomey and Walk added a wood-burning pizza oven and fresh pastas to broaden the offerings. Among the more interesting appetizers was “River Rocks Seared Beef.” Sizzling hot rocks are brought to your table to sear thin-cut beef. It is accompanied by smoked onion jam, sweet-hot mustard, red wine glaze and grilled bread to eat it on.

Both the Scampi Fritta and the scallops were very lightly breaded and just delightful.

One note: Save room for the Nitrogen Ice Cream. Liquid Nitrogen is sprayed into a metal bowl and then amazingly rich ice cream is made in front of you. Select a favorite two or three toppings and savor it.