Lisa Cornwell joined Golf Channel on January 1, 2014 as a host for Golf Central, but her life in the game goes back to her Razorback roots growing up in Arkansas – she is cousins with Bill Clinton.

Cornwell’s interest in golf became a vocation as she excelled at the collegiate level. In addition to her collegiate prowess, Cornwell was a three-time All-American junior golfer and a four-time Arkansas Women’s State Amateur champion. Her sights were squarely set on a pro golf career.

Cornwell was pre-law at Arkansas and worked in the sales field after graduation. She segued to sports media, creating and hosting the syndicated SEC Press Pass in 2011. She also has worked for the Big Ten Network and as an anchor and reporter for NBC, CBS and ABC affiliates in Mississippi, Tennessee and Ohio.

Cornwell will once again be part of the field in the American Century tournament at Edgewood at Lake Tahoe. The tournament takes place July 10-15. Last year she finished 24th with a positive score of 39 points in the Modified Stableford scoring system.

ACES Editor Dennis Miller recently had a chance to talk with Cornwell about golf and her life.

How did you get started in golf?

I was really fortunate as my parents were members of a small country club and they had a fantastic junior program. I picked up a club at the age of five and fell in love with the game. It escalated from there.

Was golf your only sport?

I played every sport growing up. I played a lot of soccer, then was an all-state basketball player in high school, but there was no future for me in basketball. But there is something in the value of team play that you don’t get in golf. I love team golf and I think any competitive golfer loves the chance to play in a true team sport.

You were successful as a junior golfer and played in college, but you didn’t want to pursue a professional career?

I played golf in college, but for me, I think I peaked at 16 or 17. I was the No. 2 ranked player in the nation at 16, but I got really burned out. It happened early for me. I got to a point where I didn’t want to practice – it felt like I was going through a divorce. I loved the game and didn’t want anything to do with it. I went through a small battle with depression. They say for many, college is the best years of your life, but for me, it they were the worst years. I let something go that had been my life. 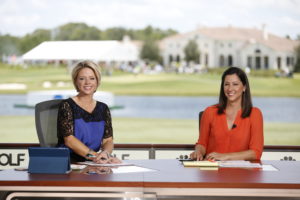 Both photos courtesy of the Golf Channel

How did broadcasting factor in to your life?

Sometimes fate takes over. I thought I was going to be a lawyer. I had taken the LSAT and was getting ready to go to law school and I thought, “what are you doing.” I was in my late 20’s and had friends in the Little Rock area that were in TV. Being a sports junkie, it was a natural for me to get into the business. I went to Mississippi to make like $20,000 a year – I took a big cut it pay. My family thought I was crazy. My agent came to me and said there might be an opening at Golf Channel. I said let’s see if it works out. Golf Channel has been a dream come true for me. I found my love of the game again.

Orange Tree (Orlando). I just bought a house there. It’s by Bay Hill.

How much do you get to play?

I played like 18 holes every two months which is pathetic, I have been the kind of person that if I don’t live near the course, I’m not going. I have hit balls the last three days, but there’s only so much you can do on the range. Your swing changes when you are on the course and right now I am trying to groove my golf course swing

What is your favorite course?

Cypress Point hands down. If I had only one course I could play the rest of my life, it would be Cypress Point. Fayetteville Country Club would be No. 2 as it’s like family for me.

Is there one course you want to play?

Augusta would be on everyone’s bucket list. I have been on the property, but have not played it. When I was 16, Frank Broyles (former Arkansas football coach) invited me to play the course with him, but I had a junior tournament, so I turned it down. At the age of 16, you don’t realize the difficulty of getting out on Augusta.

What’s the best part of playing the game?

I could give the politically correct answer and say the friends you make or the camaraderie, but the reality is, there is nothing better than being on the course and playing well. It’s about pulling off the great shot. That doesn’t happen very often for me right now, but it’s the constant pursuit of playing well.

That’s a tough one. Hmm, it would have to be Bill Clinton as he is my cousin and I have played over 100 rounds of golf with him. Jerry Hart as he taught me the game of golf when I was a kid. And Sarah Kemp as she has promised to make me a great short game player again and I am going to hold her to that.

I lowered my expectations. When I first played in the tournament, I wanted to get in there and show everyone what I had. I played better last year because I didn’t care as much about the outcome.  That was my focus and it worked. I was not intimidated by being in the same room as Charles Barkley or Justin Timberlake.

It’s a great event because the people out there don’t care how good you are, as long as you interact with them. I like to play good golf, but my motivation is to have a good time.

Lisa, thank you for taking the time to talk!

It has been my pleasure. Make sure if you are in Tahoe you say hi!