The 2018 American Century Championship at Lake Tahoe will welcome a unique competitor next month: professional golfer Natalie Gulbis. The 29th annual tournament will be aired live July 13-15 on NBCSN and NBC. (www.americancenturychampionship.com)

The 35-year-old LPGA star has overcome three back surgeries in recent years and is focused on returning to top form. She is making her strategic return this season to the women’s tour, where she won the prestigious 2007 Evian Masters and has a host of other accomplishments as one of the circuit’s most popular players.

She follows in the footsteps of special invitee Annika Sorenstam, who finished tied for second in the American Century Championship in 2014, two years into her retirement after a legendary career on the LPGA Tour. Gulbis immediately becomes one of the favorites to win the $600,000 competition and its $125,000 first prize. She is listed at 10-1 by the Harrah’s and Harveys Race and Sports Book behind three-time defending champion Mark Mulder (5-2), Tony Romo (3-1), Mardy Fish (5-1), Eric Gagne (8-1), and alongside John Smoltz (10-1). 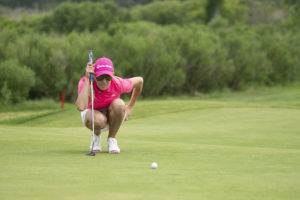 Now coming off a three-year injury hiatus, Gulbis began her professional golf career at 18 after she tied for third place in the LPGA Final Qualifying Tournament in 2001, earning her card for the 2002 season.  She has 37 top tens and career earnings of almost $5 million. She has started five tournaments this year, missing three cuts and finishing 42nd in the HUGEL-JTBC LA Open, where she shot a 68 in the final round. She represented the United States on the Solheim Cup team in 2005, 2007 and 2009.

Gulbis recently spoke to the media on a conference call. Following are excerpts from the call.

QUESTION:  I was hoping Natalie could speak to why she accepted and maybe why she’s looking forward to, what kind of challenges this presents?

NATALIE GULBIS:  Well, thank you for the question. I used to go to American Century Championship as a kid with my parents. I grew up in Sacramento and we used to go up and watch with my parents and get autographs from all the athletes.  It was such a fun week and such a fun part of my childhood as a junior golfer.

As a professional, I thought it would be cool to play in it.  And then when Annika played in it, I thought, this is so cool; as soon as I retire I would love to play in this event if they would have me, because I just had such fond memories of going to this event, just because the energy that centered around American Century Championship and to see so many athletes that I already looked up to that also played golf and now to have the opportunity to play, I feel like I’ve been begging them to let me play for a couple of years. So, I’m glad they accepted it.

QUESTION:   How do you think you’ll do competing against men, in this event, same tees, as they mentioned?

And second is I think that I will fare well. I love Edgewood. I love that golf course.  Even though I have to play from back tees it is from altitude, so hopefully I don’t have too long of clubs coming into the green.  But definitely ‑‑ we used to have this event on tour called the Wendy’s 3‑Tour, where the LPGA and PGA and Champions Tour competed against each other.  And we could equally compete against the men on other tours as long as the tees were stacked.  But when you put the LPGA players back to the men’s tees, then I’m sure all those guys will outdrive me by 100 yards. That’s where, hopefully, consistency evens out. 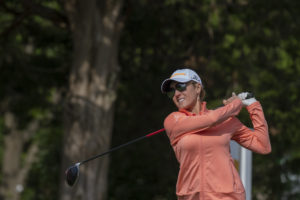 QUESTION:  Natalie, first I was wondering, in April you made the cut for the first time since 2015.  Can you walk me through that accomplishment and how you felt?

NATALIE GULBIS:  I didn’t even think twice about it.  I wish that I had given it a little more energy to it.  I play tournaments to be in contention and to have a chance to win.  So that’s really how I look at weeks.  But I did, in Los Angeles, what was great about that week was that it was my first event back after having back surgery.

So, it was really important for me to put a good week together and to just be able to play without having pain.

QUESTION:   You mentioned the back surgery.  I was wondering the five tournaments you’ve played in, all of which have been after a third back surgery.  How is your body feeling and what type of things do you have to do daily to make sure, like daily procedures, just to make sure you’re doing okay?

NATALIE GULBIS:  Thank you for the question. I have to do a lot more work than I did obviously when I came out on tour.  As every other athlete in the event knows that the longer you play, the more susceptible you are to injuries and having surgery.

On a day-in, day-out basis, I do more physical therapy.  In times when I would normally practice six, seven hours a day.  Now I practice about three or four hours and the other two hours I spend doing regeneration and PT work.  But I would gladly do it.  I love being back on tour and competing and I’m just glad to be able to play golf without pain.

QUESTION: What do remember about coming to the American Century as a child?

NATALIE GULBIS:  I grew up an Oakland A’s and a 49ers fan.  I was always trying to get, like any kid, the most amount of autographs I could.  I used to stand around the same hole, right around the water.  I probably should have a story.  Maybe I’ll have one by tournament week.  But I just remember just loving everything about the energy and the music and just that all these cool athletes loved golf.  And now they still do.

QUESTION:  Natalie, you mentioned earlier that you love Edgewood Tahoe. Of course everybody loves it for the views and the setting and everything.  What do you like about it as a golfer?

NATALIE GULBIS:  The aesthetics.  I’ve been fortunate to be able to play golf all over the world.  And to play a golf course with great views, I love that.  But I also like that the golf course is that you have to be in certain parts of the fairways to attack certain placements.  And you have to think your way around it because it’s at altitude.  And that’s something that I always loved about playing golf up there, different for Sacramento, and something that I enjoyed playing on tour, too is having to make adjustments for altitude.

And anytime you have a professional event, an event like what we’re going to have, is the pins are always going to be different.  So even if it is a cut lie, that I draw the ball.  There’s always a different way to play each hole, and I love the strategy around that golf course. 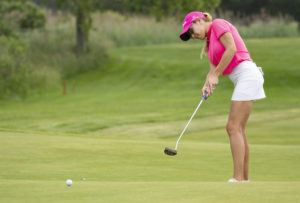 QUESTION:  I was wondering how did you go about finding golf and why was it such a passion that you just latched on to and it stuck with you just so far ‑‑ I’m sure you’re forever going to be latched on to golf?

NATALIE GULBIS:  My parents played golf.  I actually started playing golf because my best friend, my best friend today joined this program called the Little Linkers.  I used to go out growing up, playing with my dad, when I was probably six, seven, and usually chasing his golf balls ‑‑ he’d give me 25 cents for each one of his miss‑hits I would find.

Then I tried out for the boys’ high school team in high school.  When I made that, that continued to help with some momentum and then we had an LPGA event.  When I was 14 I qualified for an LPGA event, and still I didn’t have aspirations to play on tour.  I just loved to win and loved to compete.

I played in that LPGA event and didn’t break 80 both times and came home and told my parents, I think I want to be a professional golfer.  They said okay.  Like, I didn’t grow up with the idea that I would be a professional golfer.  We didn’t have ‑‑ there wasn’t even access to the information like you have now or the academies, or I wasn’t bred to be a golfer.  I didn’t go to IMG Academy or any golf academy.

We did it really organically.  I just played in a lot of tournaments and took advice from Sacramento golfers like Kevin and David Sutherland who were really generous to me and Scott McCarron.  And I just got lucky ‑‑ at the right place at the right time. 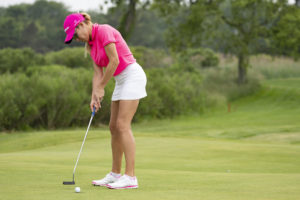 QUESTION:  Natalie, I’m wondering what your ultimate goals are with your LPGA comeback, so to speak?  And what do you think it will take to come back to contending on the weekends?

NATALIE GULBIS:  My ultimate goal is to win a tournament.  I haven’t won a tournament since I’ve had my last two back surgeries.  That’s why I play the season to win.  If I’m not able to be competitive I don’t want to play on tour.

I think it will take me playing more tournaments.  I haven’t played ‑‑ players on tour play every single week.  They also play 30 weeks a year, so the more that I play, the more comfortable I feel – the more that I’m consistent. I think it’s just a matter of rest and time and staying healthy and that’s always been consistent with how you win tournaments on tour is just continuing to work on things that need to be worked on and building your consistency and having a good attitude along the way.

As long as I can stay healthy, I think that I can come back out and be competitive.  I have about five events that I’m going to play this year on tour.  And just hopefully continue to play.