**Former Oakland A’s pitcher Mark Mulder recently received a sponsor’s exemption into the Safeway Open, a PGA Tour event at the Silverado Resort and Spa from Oct. 3-7. Here is the story we ran on Mulder right before the American Century Championship.

Following are excerpts from a conference call with Mulder

QUESTION:  Mr. Mulder, now that you’re going for your fourth in a row, I wonder if you’re feeling any pressure from your family?  Are you also playing in Flagstaff to get used to the altitude?

MARK MULDER:  Yes and yes.  I’ve told people the story about my kids before.  They think going to Tahoe for the American Century Championship is the place where we get to run out on the green at the end.

That’s just become kind of their running joke, I guess.  And I was chipping with my boys and my daughter.  We were on a chipping green at a course in, like you said, Flagstaff, a couple of weeks ago.  I chipped one in and my oldest son said, why don’t you ever do that in Tahoe, dad?  Trust me.  They know about it.  They talk about it.  They’re excited about it.

So that’s my week, I guess, where every afternoon I’ll be out with the kids playing and practicing and just trying to get myself ready for the tournament.  I’m not that person who takes lessons.  I’m not that person who hits a lot of balls because I don’t exactly know what I’m doing.  I just swing and try to find something that I can repeat.  And then I show up at the tournament and go.  And that’s about it.  I love to compete in this tournament and that allows me to do that. 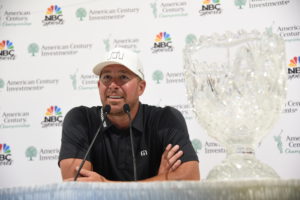 QUESTION: You’ve come to Tahoe, and is the mentality all about the golf tournament?  Or do you enjoy doing other activities with your family while you’re in town?

MARK MULDER:  It’s all about ‑‑ it’s all about golf on Friday, Saturday, Sunday.  And that’s the way it kind of should be.  The other days we have pro‑ams prior to the tournament.  But we’ll be out on the lake in a boat.

Now we’ve kind of changed it up.  We stay three or four days after the tournament, so we can do a lot more stuff with the kids, because I always felt like too much of it was a little too rushed trying to get back in time for, say, the 1:00 shotgun on one of the pro‑am days or whatever it might be.  But normally, after the Friday or Saturday rounds, I go back and hang with the kids for a little bit.  And my parents are there with us to kind of help with them, so my wife and I ‑‑ there’s a lot of functions at night we go to, whether it’s the concerts, whatever it might be. So, we attend all the events.  And it makes for a great time.

QUESTION:  Besides winning, what else do you like about the tournament here in Tahoe?

MARK MULDER:  Well, the fans that have shown up.  I’m fortunate.  Having played for the A’s, a good majority of the people who have places or spend a lot of time in Tahoe are Bay Area people.

And I can’t begin to tell you how many people come up and talk sports, whether it’s Giants, A’s, whatever it might be, it’s really cool.

My wife and I have laughed over the last handful of years because I was young when I was in Oakland.  It was my 20‑ to, say, 26‑year‑old years when I pitched for the A’s.

And it’s funny, man, I have little kids coming up asking for autographs saying, you were my mom’s favorite player. It’s funny how these things change as life goes on and the older you get.

But it’s really cool, though.  And none of the kids there really have any clue who I was with the A’s or anything like that.  But the parents do.  And a lot of people that are there for the tournament do.

QUESTION:  Mark, being on top of the throne and top of the leaderboard each year, do you have any friends and peers leading up to the tournament telling you they’re going to take you down or anything like that?

MARK MULDER:  From people playing in the tournament?

MARK MULDER:  Oh, yeah.  There’s all sorts of chirping going on on the range.  And that’s what makes it so great is all of the other celebrities that are in this field are fantastic.

And you get to know so many of them so well.  Everybody’s chirping at each other on the driving range, whether it’s making little wagers or whatever it might be, because, hey, gambling is legal there.

So, it makes for a great atmosphere.  Derek Lowe has worn me out the last couple of years.  He likes to joke about, oh, here he comes, walking on the range.  Things like that.

But it’s all the clubhouse culture.  And I think for the majority of us who are done with our sport, I love it because I don’t get it anywhere else.

The fact that I can be on the receiving end of that kind of talk, I miss it from the clubhouse days, so therefore I thrive off of it and I love it.

QUESTION: Mark you mentioned a little bit about kind of the back and forth.  I know that you and Johnny Smoltz have been kind of on the same path with the golf.  And he obviously did the Senior Open, I guess.  What have you seen from him and how much chirping do you hear from him at this tournament?

MARK MULDER:  Smoltzy’s always talking. I’ve been texting with Smoltz a few times:  How is your game?  Are you getting ready?  Smoltz is constantly the guy, “ahh, it’s terrible.”  He’s always just downplaying it.  “I haven’t been playing.”  He loves using the TV ‑‑ “I’m doing too much TV” ‑‑ as an excuse.  And meanwhile I know he’s out there doing MLB Network and he’s golfing every single morning. So, he can only use it ‑‑ he can only use it for so long.

But I believe last year I think round two we were paired together, Smoltz and I.  And I don’t remember who else was in our group.  Maybe Derek Lowe.  But either way, I love the guy.  And we have such a good friendship.  I love competing against him.  And he’s another guy.  Your career ends, man, and you have nowhere to compete.  And golf has kind of given that to us, especially this tournament. 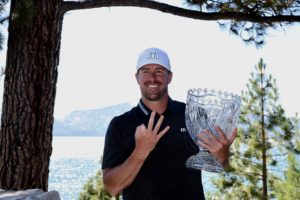 QUESTION:  Without the TV this year, what’s been different for your golf game and have you been able to focus a little bit more on it?  How do you feel like you’re playing coming up?

MARK MULDER:  I had a rough stretch this winter.  I took my ‑‑ I got so frustrated around mid‑May, I took the second lesson of my life because I couldn’t figure out what I was doing wrong.

I had about a three, four‑month stretch where it was ‑‑ the game wasn’t a whole lot of fun.  And it kind of, because I’m not doing the TV stuff this year, it kind of made me think that ‑‑ I get golfed out real easy.  And I don’t like playing all the time.  Because I’m not doing the TV stuff, I didn’t have that get‑away.  I didn’t have that escape of kind of coming up with an excuse ‑‑ well, I’m not going to bring my clubs on this trip because I have to do the TV stuff.

QUESTION:  Mr. Mulder, what’s the pressure of repeat championships like compared to pitching in the postseason?

MARK MULDER:  Well, it’s different.  I mean, with baseball, I’m as confident as ever out there on the mound.  And it’s what I did for a living.  There was not a place I was more comfortable.

On the golf course, on the other hand, they’re going to announce my name each day.  All three days on the first tee and my hand is still shaking.  It’s not something I’m as comfortable with.

It’s getting better.  I’m getting more and more comfortable as the years go on that I’ve played in this thing.  But it’s still an uncomfortable feeling.  But, it’s like I said, I love it, though.  I love that feeling of being uncomfortable and put under the gun and feeling that pressure and the eyes watching you.

But it’s what we enjoy, or at least I know I do. For a lot of us athletes, especially the first day, that first tee shot, it’s kind of a nerve‑racking experience.  But once you get out on the course you settle down and you get a little more comfortable and you start getting into your game, I guess, you could say.  And mentally it’s a little bit better, but you know you have 16, 17, 18 coming with the craziness.  But that also creates a lot of excitement.