Located on the top and the 12th floor of the Marines Memorial Club, the Leatherneck Steakhouse features panoramic views of Union Square and downtown San Francisco.

The club, established in 1946, features he steakhouse serving lunch and dinner and Chesty’s Bar on its top floor.

The facility, located on Sutter St. three blocks off Union Square, also includes a 564-seat theater and 138 guest rooms. We have seen theatrical productions there over the years, but last summer we had the opportunity to spend a couple of nights there and recently we slipped into the city for a mid-week lunch at the steakhouse.

The lunch menu offered three soups (clam chowder and French onion plus a soup of the day), several intriguing salads, a variety of sandwiches and just four entrees: a New York steak ($27), a grilled Mary’s chicken breast ($20), fish and chips ($14) and Petrale Sole ($18). 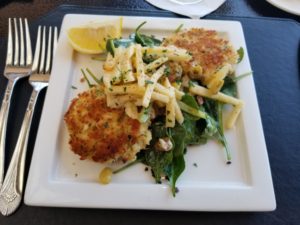 My bride quickly opted for the crab cakes ($18) served on a spinach salad topped with an apple slaw. Wow—were these good. I shared a bite and would have readily swapped entrees. The crab cakes were loaded with the shellfish with very little filler and were ample in size.

As attracted as I was to the crab cakes, I went for variety and selected the seafood salad ($18) with crab and bay shrimp topping mixed greens dressed in a Balsamic vinaigrette. It was a tasty salad, although I would select the crab cakes when we go back.

The dinner menu fits the steakhouse theme offering appetizers such as oyster on the half shell and spicy calamari along with soups and salads. New York steaks, prime rib, filet mignon, ribeye and a 20-ounce Porterhouse all grace the menu. Prices range from $29 to $65 for the Porterhouse. For a downtown San Francisco restaurant with a view, the prices were quite fair. 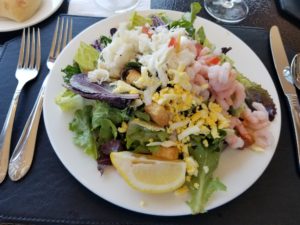 The beef offerings are complimented by rack of lamb, Mary’s chicken, cioppino, seared sea scallops and a Bison New York strip. All entrees are accompanied by an iceberg wedge with blue cheese with the expected variety of sides available at $10 to serve two.

The wine list is primarily from the Napa and Sonoma valleys and the selections are fairly priced. What is a bargain is the price of cocktails. Dessert drinks such as Drambuie or Grand Marnier were just $7.50. The reasonable price points may reflect that it’s a club not a stand-alone restaurant/bar.

When staying at the hotel, there’s a two-hour complimentary happy hour from 4-6 p.m. Rooms also include a buffet breakfast with an omlette station.

We thoroughly enjoyed our two visits to the Marines Memorial Club and will go back when we have the occasion to be in San Francisco. Weekend room rates in May were $279.

Our earlier hotel stay finished with a dash back to the East Bay and a round of golf on the Metropolitan Golf Links at the Oakland Airport.