The words “value” and fine dining in San Francisco seem to be a non sequitur.

The city is renowned for its food culture and is known for fine meals that easily run into hundreds of dollars, particularly when matched with wine.

Trestle, which has about 40 seats, is a tiny storefront at 531 Jackson St., a couple of blocks from Chinatown just off of North Beach. It belies that description and proudly touts its fine dining in its $39 Prix Fixe three-course dinner. We made a reservation to dine there after our daughter’s August wedding rehearsal in San Francisco and left delighted. 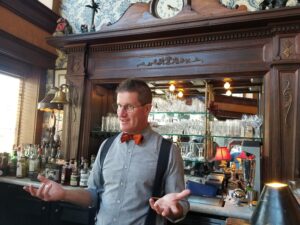 It only offers beer and wine and we were ready for a cocktail. At their suggestion, we stopped for a drink at the Comstock Saloon a block up Jackson St. It dates to 1907 and still boasts the original barber shop tile floor in the bar. The bar back is a modified mantle from Berkeley, while the bar itself also was recycled from another establishment. We enjoyed both our drinks and the conversation with the personable bartender as well as a fellow patron from the mid-West who makes it a point to visit the Comstock on his regular business trips to San Francisco.

We had read the Trestle reviews and been sure to reserve a table because it was packed shortly after we walked in. It opens at 5:30 p.m. daily and generally tables turn only once before closing at 9 p.m. most days (later on Friday and Saturday). Be sure you have a reservation because landing a table without one is a major roll of the dice. 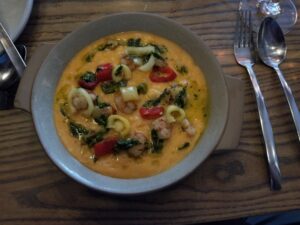 Some element of the menu changes daily, but we found several dishes repeated over the course of a week. Checking back a month later, only one of the eight dishes featured the same protein—crispy pork schnitzel—but with different sides, marinated stone fruit, radicchio and hot pepper remoulade vs. cilantro slaw, grilled nectarine and chipotle remoulade.

It’s easy to see the creativity coming from the kitchen. 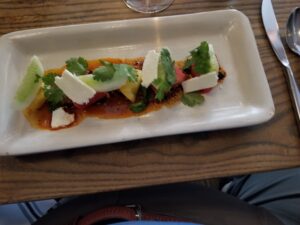 Between my wife and I, we each enjoyed four courses ($12 supplement for a pasta course) and got to taste the entire menu. I started with a heirloom tomato salad presented differently in a rectangular plate with the tomatoes in chunks, while my bride selected the curried summer squash soup (a similar soup was on the Sept. 15 menu).

Looking at the menu, I was challenged to decide on a wine and asked the server who recommended a French rose from ZouZou ($60)—it complemented most dishes nicely.

I enjoyed the rock shrimp risotto, while my bride went with the rigatoni Arrabbiata with burrata and crispy pancetta. Both were executed very well. 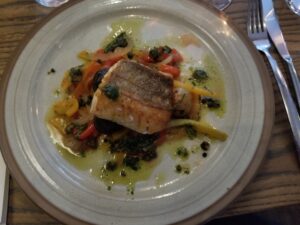 The pan-seared ling cod (a fish course was offered every time I checked the menu) came with marble potato confit and salsa verde.

The creativity in the kitchen shows again with the blueberry buttermilk cake that was small cubes of cake with fresh blueberries. The chocolate panna cotta with lady fingers and mascarpone mousse was the better choice because the cake was a bit dried out.

We left pleased with both the food and the experience and put the combo on the list to try again when we happen to be in San Francisco at dinner time.

The Trestle website and menu proclaim, “…we remember a time, not too long ago, where people took pause to enjoy a meal in the presence of great company, giving it the reverence and respect deserved…Trestle has been created to serve as your home away from home. We’ll provide a dining experience served in courses, with the satisfaction and warmth found at a family gathering, creating the foundation to a proper meal.”