When partners Steve Cass and Ted Plemons decided to build a Cass Winery on their vineyard in Paso Robles, they had a simple objective: make guests comfortable so they could have fun.

Cass, who retired as a Charles Schwab executive after 20 years with the financial services firm, came south to Paso Robles and bought 700 acres that he developed into 160 acres of vineyards as well as some estate housing sites. The first crop was harvested in 2000, but the venture took a new turn in 2003. 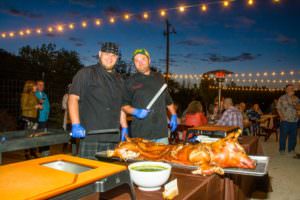 Carving the pig at Cass

Cass and his partner, Ted Clemons, were on a golfing/wine tasting trip to South Africa and sharing a few bottles of wine over dinner. That conversation led to the decision to build a winery and tasting room based on what they learned in South Africa. The resulting Cass winery (opened in 2005) features seated tasting both inside and outside on the shady patio—there’s a tasting bar, but that would be used only on a very busy day.

They took the concept a step farther when they added Chef Jacob Loveday and started offering food and wine pairings. These are not “small bites”—they are full lunch entrees and each comes with a recommended wine pairing as well as other tastings. Entrees ranged from crab cakes to smoked chicken salad to pulled pork and Benny’s Burger (made with estate-grown beef).

We arrived at Cass after a late breakfast so we were not ready for lunch. We will not make that mistake next time. We also hit a Saturday when wine club members were seated around tables in a private room working on blending wine. The finished product from each table was put in a blind tasting against the other tables, with the winning blend bottled for wine club members. 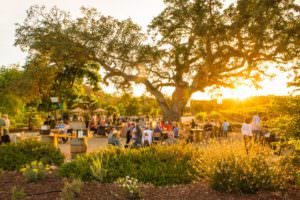 Ted was in his element—wandering from table to table with a glass of his favorite Mourvedre in hand—making sure guests were enjoying themselves. Given the laughter level, that was not a question.

Cass grows both Rhone varieties (white and red) as well as Cabernet Sauvignon. Plemons readily confesses he is a Mourvedre nut and urged their winemaker bottle it separately. It’s now a best seller for the 10,000-case winery.

It’s also blended with 72 percent Cab and a touch of Petit Verdot into a wonderful Boudreaux blend that Ted loves taking to the local Cab society while wearing his Rhone Ranger t-shirt. Check out his video HERE. 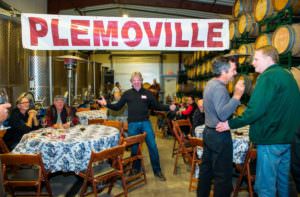 Yes, Ted is a character as well as an accomplished builder of custom homes and wineries. He and Cass also are running a quality winery that is both relaxing and fun to visit. Do go for lunch at 7350 Linne Road.