One thing I love doing is exploring coastal towns up and down the California coast with my wife.

We have had the pleasure to enjoy many stretching from Mendocino to San Diego, but until recently one we had not checked off our list was Morro Bay. Mark that box off now and my first thought – why did it take us so long!

There is a vibe in coastal towns, one of relaxation, yet fun. Morro Bay has it in spades. Many of the coastal destinations have become somewhat pretentious, taking away from what makes heading to the coast so special.

In Morro Bay, you get the feeling of a true coastal town, not a corporate one.

Having never been there before I did my diligence of research and was amazed to find a series of natural landmarks in the area. Known as the Nine Sisters, they are a chain of nine volcanic mountains and hills that run from Morro Bay to San Luis Obispo. 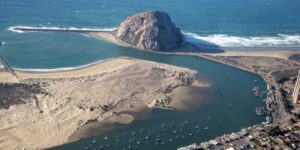 The peaks were created more than 20 million years ago and are volcanic plugs of magma which welled up and solidified inside softer rock which has since eroded away.

Morro Rock sits just off the town and rises 576 feet tall. It has been used as a navigational aid for sailors.

When I was doing my research, I saw many pictures but none of them came close to seeing it in person. It’s mesmerizing to be honest. My wife might argue with you at that point but seeing it and knowing how old it is, was something to see.

There is another landmark in the town not too far away from Morro Rock. The “Stacks” – three, 450-foot stacks – were part of the Morro Bay Power Plant, a plant that opened in the 1950’s but closed in recent years.

Initially, I thought the stakes were unsightly, but by the time we left time, I had learned to appreciate them, and you felt the importance they held in the culture of Morro Bay. 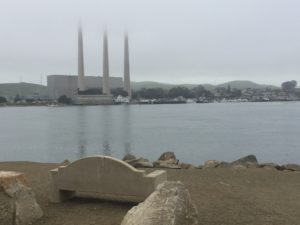 One local told us there was talk of tearing down the plant but leaving the stacks as it is part of the identity of the region. I agree.

Outside of the landmarks, Morro Bay is a wonderful destination to escape the summer heat throughout Northern California. Depending on traffic it can be under three hours from the East Bay.

The Embarcadero is the happening spot with restaurants, shopping, wine tasting and other entertainment options. There sport fishing tours, bay cruises and kayak rentals available.

What struck us was the affordability of everything. For most coastal destinations, you need to be prepared to pay more than usual but that is not the case in Morro Bay.

Be it shopping, dining or just buying a bottle of wine to sit on a deck and enjoy the day, everything was reasonably priced. In addition, at nearly every place we went, the people treated you like a local as opposed to a tourist.

One of favorite places was the Shell Shop that sold, you guessed it, shells. My wife went nuts buying decretive shells, as well as some for our granddaughters. 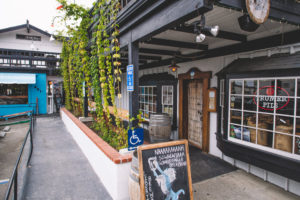 We found a great place to grab a drink at The Libertine Pub. Great beer and the music was vinyl – not much else needs to be said!

But there is more than just the Embarcadero if you are looking for shopping. We ventured up Morro Bay Blvd. and found some fun little shops, including Vinyl Isle, a neat little record store that had vinyl as well as 8-track tapes. They also had a fair share of older equipment for sale. It was a throw-back and a fun one at that.

There are plenty of lodging properties, ranging from a number right down in the Embarcadero, some away from the hustle and bustle and a cool campground by the Morro Bay Golf Course.

When those series of 100-degree days start hitting us in Northern California, do yourself a favor and head south to Morro Bay. It’s a wonderful, fun and relaxing place to escape and recharge.

For more information on the region check out www.morrobay.org.