After dining at Flaherty’s Seafood Grill and Oyster Bay in Carmel-by-the-Sea, I heard from some that locals in Carmel don’t dine at the restaurant.

That was followed with two quick thoughts.

One, mistake by the locals; Two, it’s easy to see why the tourist line up!

In any vacation area, restaurants are in competition. Realistically, most of the food from the dining establishments is going to be good, so it’s the intangibles that set the places apart.

That’s where it is a big success for Flaherty’s.

The place is located just off Ocean Ave. in downtown Carmel, walking distance from virtually every lodging property. It’s welcoming and a must-stop on your trip. 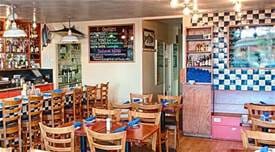 The night we went to Flaherty’s, there was a hostess outside greeting people going into the Grill on one side or the Oyster Bar on the other. During our visit, Shelby was the hostess and she was one of the hardest working hostesses I have seen in a dining establishment.

Not once did we see her hard work compromise her friendly, outgoing personality.

As the evening went on, owner Ken Spilfogel took his turn out front, not only greeting customers, but interacting with people walking down the street.

Our server was Kayla and she mastered all the qualities both an owner and a customer would hope for in someone waiting on their table. Kayla was knowledgeable – in a wine as well as the food – charming, outgoing and friendly.

We watched her interact with the customers and she treated each as if they were a guest in her house.

We started with the Signature Crab Cakes, as well a Castroville Artichoke. The Crab Cakes were served with a corn and black bean relish, as well as slaw and a roasted red pepper sauce.

The Artichoke came with a Dijon mustard, as well as the relish and the slaw. Both were awesome and the perfect way to start the meal. 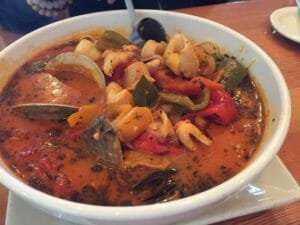 Next, we followed with a half-bowl of Flaherty’s Traditional Cioppino (trust me, a half bowl was plenty!) and it was crazy good. The rich Roma Tomato Broth was the perfect compliment to the prawns, scallops, fish, mussels, clams, calamari and crab. There was just enough kick to the soup to spice it up, but no so much to be off-putting.

For the main course, my wife went with the Fresh Salmon and Artichoke Pasta, that was served with an Artichoke-Pesto cream sauce.

I opted for the Seared Diver Scallops, served with a Pacific Crab Risotto (scallops have always been a personal favorite).

Not much to say about either entrée – that’s a good thing, as there was little conversation during dinner, as we both savored our wonderful meal.

At the recommendation of Kayla, we ordered the Olallieberry Pie for dessert. Despite being stuffed to the gills – fish pun intended – we powered through the perfect topper to the evening.

The food was sensational, but equally important, the service matched the food. The staff at Flaherty’s goes out of the way to make the dining experience great for everyone.

They offer menus in several different languages, including Spanish, French, Italian, German, Portuguese and Chinese in addition to English. 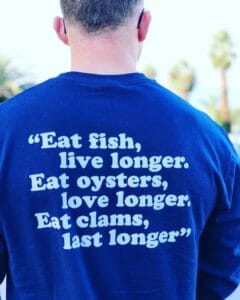 Flaherty’s also offers a Gluten-Free menu and the food is cooked in a different fryer to avoid cross-contamination.

At Flaherty’s, you will experience a small town, comfortable, family atmosphere, where quality ingredients and quality preparation come together with quality service.

When visiting an area, at times it pays to listen to the locals, but there’s something to be said about taking advice from fellow tourists. Flaherty’s is a place you don’t want to miss when vacationing in Carmel!

For more information go to www.flahertysseafood.com.