Looking to its future as it finishes its 100-year celebration, the Pebble Beach Company has partnered with Tiger Woods to design a new short course on the site of the former Peter Hay course.

The short course is scheduled to open this fall. The goal of the “reimagined” course is to bring it up to par with the four full-length courses the company owns: Pebble Beach Golf Links, Spyglass Hill Golf Course, the Links at Spanish Bay and the Del Monte Golf Course. Construction is set to begin after the AT&T Pebble Beach National Pro-Am in February.

The press release quoted Woods saying, ““Pebble Beach has always been a special place to me. “It’s an honor for TGR Design and me to partner with Pebble Beach Company to design a new short course at such an iconic location.”

The new short course follows the trend of fun short courses at destination resorts such as Bandon Dunes and Pinehurst. It will leverage the amenities of the Pebble Beach Golf Academy and offer a new food-and-beverage venue with great views of the Pacific Ocean. 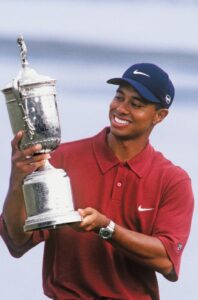 “We are thrilled to partner with Tiger Woods and TGR Design to transform the Peter Hay site into a world-class short course,” said Bill Perocchi, Chief Executive Officer of Pebble Beach Company. “Tiger Woods and TGR Design are the perfect partners for this project, given Tiger’s commitment to youth golf and experience in developing fun, creative, and playable courses for golfers of all levels.”

The Peter Hay site was named for the long-time Pebble Beach head golf professional and has been the site of many events since opening in 1957.

“Peter Hay’s founding vision for this course aligns perfectly with TGR Design’s ideals – introducing new players to the game, bringing families together, and providing a fun golf experience for players of all abilities,” said Woods. “We at TGR Design look forward to building on and enhancing this vision with our redesign, which will incorporate more variety into the hole lengths and shot options, add more puttable areas within the green surrounds and take advantage of the spectacular ocean views.”

“The resort announced on Tuesday that Tiger Woods’ design firm, TGR Design, will start reconstruction of the rather mundane layout in 2020, rethinking the previous routing to include a second hole that will replicate Pebble Beach’s famous seventh hole—by the exact elevation change, exact dimension of the green and even wind direction, as the proposed second hole at Peter Hay will play due south just like the famous par-3 seventh.

“Conversations about the vision of Peter Hay were actually sparked by Tiger Woods during his preparations for the U.S. Open this year, Pebble Beach vice president and Director of Golf John Sawin told Golf Digest on Tuesday. Tiger noticed that some construction was ongoing at Peter Hay, which served as the grand entrance to the U.S. Open last year, and he expressed an interest in being involved in the future of a reimagined short course at Pebble Beach.”

” “From our standpoint, it was a natural fit,” Sawin told Golf Digest. “Tiger and his team are very fun, creative people. And they have experience building these fun, dynamic playable short courses that are interesting and challenging for avid golfers, but still fun and playable for beginners. And maintaining that family-oriented, welcoming environment for junior golfers and beginners will be a great fit for how we see Peter Hay continuing to play a role in our community within the golf resort.”