The iconic Omni La Costa Resort and Spa has been a destination for golf and relaxation since it was established more than 50 years ago.

Now owned by Omni, the new leadership is fine tuning the resort, which sits just two miles inland from the Pacific Ocean in Carlsbad about 30 minutes north of San Diego. It is located across the Batiquitos Lagoon State Preserve from another excellent resort, the Park Hyatt Aviarra Resort and Spa.

Since the Omni Hotels group bought La Costa in July 2013 (it also purchased the Rancho Las Palmas Resort and Spa in Rancho Mirage in the Coachella Valley as well as three other destination resort properties), it has been putting its stamp on the resort.

Two of the latest key managers are both in the golf operation: Jason Brustad, the Director of Golf, and Mat Dunmyer, the course superintendent. Brustad started New Year’s Eve, while Dunmyer took over the golf courses last summer.  Brustad moved to La Costa and its 36 holes from Montreux Country Club south of Reno on the foothills of Mt. Rose.

He was well-suited for this new job because his career includes plenty of experience with private clubs. La Costa is unusual because it is both a private club and a resort that is open to both hotel guests and the public. There is a separate dining room and locker rooms for members, but everyone is served through the same pro shop. 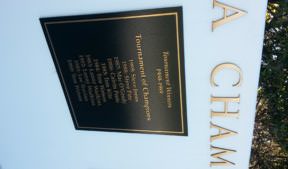 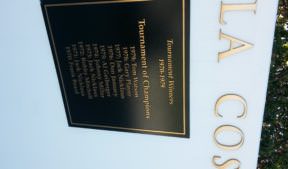 La Costa has a storied history with the PGA Tour. It was the site of the Tournament of Champions, open only to the winners of the Majors in that year, for 30 years starting in 1969. That brought Hall of Famers such as Jack Nicklaus, Tom Watson, Lee Trevino, Gary Player and Johnny Miller to compete on the Champions course (formerly the North Course).

Sixteen years of the match play format followed, drawing stars such as Tiger Woods and Phil Mickelson. The winners of both tournaments are emblazoned on plaques that are worth a stop when going to or from the pro shop.  As one person pointed out, La Costa’s history with the PGA Tour is probably second in Southern California only to the Riviera Country Club in Los Angeles.

Overseeing the golf course is new superintendent Dunmyer. La Costa presents an interesting challenge for superintendents because of winter frosts. Yes, just two miles from the ocean, there were 32 frost days last winter because the golf courses sit down in a valley. That means the Bermuda fairways and rough go brown in the winter—not the aesthetic that golfers expect from a 12-month resort, particularly when compared to the gorgeous winter fairways 100 miles inland in the Coachella Valley.

The solution that Dunmyer used—spray the Bermuda with green pigment to yield green fairways that were quite playable. The pigment was applied monthly from November through February. Not only was it effective, it saved gobs of money over the $250,000 cost to over-seed with winter grasses. When we played in early April, the Bermuda in the fairways had greened up and was growing in in adjacent areas. 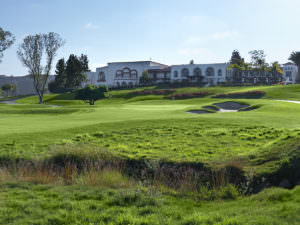 No. 18 on the Champions course

The courses, which have been irrigated with recycled water for 25 years, had some turf removed when the team of Damian Pascuzzo and Steve Pate updated the original Dick Wilson designs within the last four years. There also are 14 fairways that have been reseeded with seaside Paspalum, a grass that seems to do well with the recycled water that has more salts than potable water.

We played the Legends course with greens rolling true and fairways in excellent conditions. As Jason had mentioned, the housing that has grown up around the resort is eclectic—condominiums, and plenty of single-family homes with a variety of architectural designs. It is the antithesis of what you see around many newer country clubs with their strict building standards.

The Legends course is routed out to the edge of the property (crossing under one street) and runs along one of those hills that gives some elevation to holes three through six. The No. 1 handicap is the par 5, uphill third hole. Wilson’s design features small greens by today’s standards, which puts a premium on the short game. 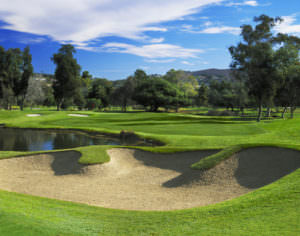 No. 10 at La Costa Legends course

Off the golf course, the resort offers tennis and plenty to do for all members of the family. There’s a walk-in shallow pool with a sandy beach for the toddlers and youngsters, a water slide and water guns plus a family pool. There’s also an adults-only pool and spa. The game room with air hockey and video games was quite popular all day long.

The dining choices will grow this summer when nationally known Bob’s Steakhouse opens at La Costa. At present, the restaurant hub is in the main building and clubhouse with the private members-only restaurant, the grab-and-go store with a Peet’s Coffee Shop and the Bistro 65 restaurant. The Bistro features a large patio overlooking the golf courses to the east with plenty of water hazards on display including the water fall on the par 3 No. 16 on the Champions course.

Breakfast, lunch and dinner are served there—a patio table (with a heater nearby in case the temperatures drop) is ideal. The Bistro offers 12 local beers on tap with four more available in bottles. It also features a full bar plus a selection of wines by both the glass and the bottle. 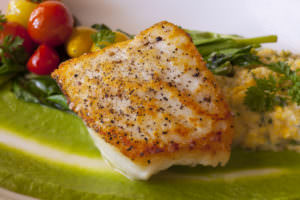 We started with some delightful lightly breaded calamari served with a Meyer lemon and Basil aioli. We split a large roasted beet and kale salad with farro, tangerine wedges and feta.  That could have served as an entrée with grilled chicken, prawns and king salmon available to top it.

For the entrée, my bride enjoyed the daily catch, a halibut in a curry sauce, while I choose the marinated hanger steak with truffle parmesan frites and a house salad.  Mine was perfectly cooked and was complimented well by a Beringer Knight’s Valley Cabernet Sauvignon.

The resort has 608 rooms that range from villas with full kitchens to suites and single rooms. Our room had a comfortable king bed and an oversized bathroom with soaking tub and separate glass shower. The room was equipped with a desk and two chairs that could serve as a table for in-room dining or a work space to catch up. Our room had a small patio that overlooked the first tee on the Champions course. The patio door was well designed (a Dutch door) with screen windows that open to allow breezes day or night.

There was a single-cup coffee brewer, but a great La Costa service is the option of fresh brewed coffee, tea, or juice delivered to your door with the morning paper at the time you request the night before. That came in very handy when we had a 7 a.m. tee time and could enjoy the coffee at 6:15 before heading to the course.