Arizona is a very popular golfing destination during the winter months thanks to many high-quality courses and 70-degree weather from December through February.

There is plenty to learn about golf in Arizona because of the vast number of courses, resorts and hotels. Where to stay, play, dine and party are questions for every visitor.

And when it comes to golf in the Phoenix/Scottsdale valley, there may be no person with as much inside information as Bill Huffman.

Huffman moved to Arizona in 1982 and worked at the Arizona Republic until 1999. Along the way he was the national president of the Associated Press Sports Editors and a member of the executive committee of the Golf Writers Association of America from 1996-98. 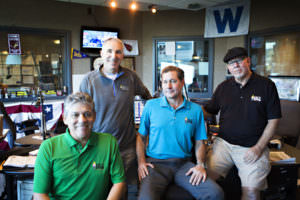 Huff and the Backspin crew

He currently writes for azgolf.org, the official golf website of the Arizona Golf Association. But he may be known best for being one of the hosts of Backspin the Golf Show on Xtra 910 broadcast from the Phoenix/Scottsdale area. The show is very popular, so much in fact, it has PING as a sponsor. It is rare for a local golf show to gain a national sponsor.

He teams with three other hosts, including Corey La Russo, the son of former Golden State Warriors star Rudy La Russo. Joining them are Rick Levy, who grew up in San Rafael and now is the vice-president of operations for Van’s Golf Shops, and former TV personality Gary Cruz.

The show ultimately drove Huffman out of the newspaper business.

“They (the Republic) wouldn’t let me do the radio show so when I left the paper, I started doing the radio show,” explained Huffman.

The success of the show mirrors the level of popularity in golf in Arizona.

“Golf in Arizona is doing really well,” said Huffman. “We seem to be getting more and more visitors all the time. You can have a guy come out here with a group of friends, spend a week at a nice place, play golf and spend under $2,000.”

In a time where there are golf courses either closing or rounds and revenue are suffering so badly that the maintenance at the course suffers, the Phoenix/Scottsdale area has two new courses getting ready to open.

The Wickenburg Ranch Golf and Social Club will open February 7. The course is private by charter, but will offer a limited number of guests on a daily fee basis.

There is also the Tom Lehman-designed Victory at Verrado, a course that is planned to open later this year.

“This shows that stuff is going on in Arizona,” said Huffman. “We have a lot of spectacular golf courses that are open to the public and it seems that people don’t think anything of the green fees.”

If you want to keep up with golf in Arizona, the radio show airs on Wednesday and Saturday.

“Wednesday nights we go from 7-8 p.m. and preview the next PGA Tour event,” said Huffman. “On Saturday mornings we do Arizona golf.”

On Wednesday nights they run their “Beat the Pro” contest where Levy picks a player he thinks will win the PGA Tour event that week. They then ask three trivia questions and the three winners get a chance to play against Levy. If they beat Levy, they win a dozen golf balls. If their pick wins the Tour event, the contestant gets whatever money is in the pot – it builds $50 per week.

“I think we started this year with like $700 in the pot,” said Huffman.

If you would like more information on the radio show go to http://www.backspinthegolfshow.com