The Fairmont Scottsdale Princess offers four distinctive dining options, including its grill that overlooks the 18th green at TPC Scottsdale.

Voted the No. 1 Mexican restaurant in Arizona among some serious competition by Ranking Arizona in 2012, the restaurant offers both in-door and outdoor dining. Several parties were sitting outside in late October, because the chill of the evening was easily offset by gas furnaces.

Sandoval’s menu is based upon fresh ingredients prepared in a contempary Mexican style that is lighter than the traditional approach. Executing overseeing his vision is the Princess’ own executive chef, Forest Hamrick. La Hacienda has received the AAA Four-diamond award three years in a row. 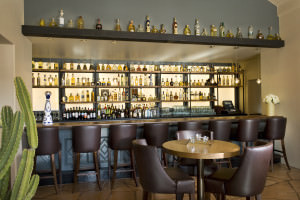 One of the house specialties is guacamole mixed tableside with tomato, cilantro, onions, Serrano Chile and tortilla chips. Our bowl, made with one and one-half large avocados was more than the two of us could finish. The menu offers three other guacamoles, including one with shrimp and another with red cabbage and pickled red onionsWe followed with lobster tacos, an excellent recommendation from our hosts. Fresh Maine lobster is wrapped in flour tortillas with black bean, chile de arbol sauce, avocado and cilantro. The tacos were one of 15 different appetizers on the expansive menu.

While my dining partner went for a glass of red wine, I ventured the more than 200 Tequilas that the bar offers for the snakebite sampler that included a trio of tastes.  The Herrado Reposado is aged about 11 months in used bourbon barrels. It was followed by a Sotol Resosado by Hacienda de Chihuahua from the high desert in northern Mexico. It is produced organically.

The final sample was a Mexcal Reposado from Las Nahuales that was characterized by the smoky flavor that is developed by smoking the leaves. It is from Oaxaca. All three were aged 11 months or longer. 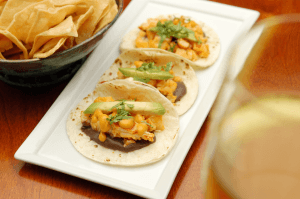 Sampling done, I returned to a familiar margarita and turned to an heirloom tomato salad that matched rounds of watermelon with a yellow tomato and a firm white cheese with jicama, red onion and radish garnishes that was brought together with an arbol vinaigrette. It was an unusual and delightful taste combination.
My partner opted for the tempura-friend sea bass that was split in half and then fried. It was accompanied by the Savoy cabbage, chile arbol remoulade and corn tortillas. He really enjoyed it.

I went for the enchilada stuffed with Dungeness Crab, Pico de Gallo, spinach, Oaxaca cheese Tomatillo corn sauce with red onion, cherry tomato and pea shoots. Delightful and very filling—we were not tempted by desert, but we had to sample some.

That included some superb cinnamon churros as well as a sample of rice pudding and the   highlight—flaming coffee. Our server, Amy Melbye (the only woman on the serving team), put 151-proof rum in glasses, lit it and then sprinkled a mixture of cinnamon and sugar over the flames. That resulted in nicely caramelized sugar and cinnamon in the glasses after the depleted rum was dumped.

She followed with coffee and a mixture of Grand Marnier, sabroso and brandy (the Cafe’ Hacienda) or tequila, sabroso and whipped cream (Café’ Mexico).  Six different recipes were offered for the flaming coffee.

We strolled back to our room, pleasantly full, and willing to recommend La Hacienda for anyone looking for a fresh take on Mexican food.

Restaurateur Michael Mina’s Bourbon Steak is one of his 18 restaurants across the United States that grew out of his experience with Aqua in downtown San Francisco.

When tennis legend Andre Agassi dined at Aqua, the meal he enjoyed sparked the partnership that has developed the restaurants. There are sister Bourbon Steak restaurants in San Francisco, Miami,   Washington D.C. and the latest at Levi’s Stadium.

Mina is known for striving for a balance of tastes utilizing organic and, ideally, locally sourced ingredients.

While we perused the extensive menu, we were surprised with a trio of French fries that had been fried in duck fat, each with a dip matched to their preparation. It’s a staple of Bourbon Steak.  The dill pickle fries were particularly good. We followed with a baby shrimp with a spicy soy sauce—a savory tiny bite.

At the Princess, the Bourbon Steak menu offers the expected range of shellfish (scallops, lobster, shrimp, oysters) and the expected salads (ice berg wedge, market, Caesar), but also has some dishes with an Asian flair, as well as other surprises. 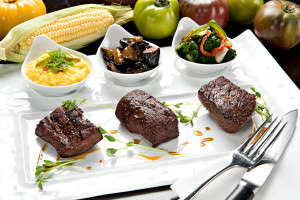 There are butter-poached steaks, including the Snake River Wagyu beef, which is harvested from the same Wagyu cattle that produce the famed Kobe beef in Japan. A New York strip and a flat iron steak are on the menu from the Snake River along with traditional offerings ranging from filet mignon to bone-in rib eye and a 32-ounce Porterhouse.

Being focused on beef after enjoying various seafood the prior evening, we passed on an intriguing Maine lobster pot pie with brandied lobster cream, market vegetables and truffle. The diver scallops from Maine with short rib ravioli and Chanterelle mushrooms also looked very interesting.

We could not pass on the seafood entirely, choosing to compliment our steaks with half of a grilled lobster tail and immense (four to a pound) prawns.

We opted for the heirloom carrots with apricot mostarda and the green beans steamed in soy gel and garnished with shaved Bonito (dried fish). The apricots complimented the roasted carrots nicely—two non-traditional approaches to vegetables.  Of course, if you were hankering for a steak house favorite creamed spinach is available as are crispy hash browns dreamed with crème fraiche and chives.

Both the wine and cocktail list are expansive, as you would expect for an updated steakhouse.

We enjoyed a superb Shiraz, Mollydooker Blue Eyed Boy from Southern Australian. It was drinking very well and was current vintage at 2011.

The meal was pricey, but excellent. It is a special occasion restaurant for most of us—probably the dining highlight of the week for a group of guys on a buddies trip who were enjoying a festive steak dinner nearby.