If you are a country music fan, this is a name that will become familiar in the very near future.

Jacobson is a 25-year-old from Reno that is beginning to make a name for himself in the country music world.

He falls under the same management group – Durango Artist Management – as Cody Johnson, the artist that won a pair of Country Music Awards (CMA), taking home both the Video of the Year and the Single of the Year for the song “Till You Can.”

In fact, Jacobson was at the CMA’s celebrating with the Johnson and the Durango team after the big night.

Jacobson has embraced more of the 90s country, something that seems to be coming back into vogue in the country genre. 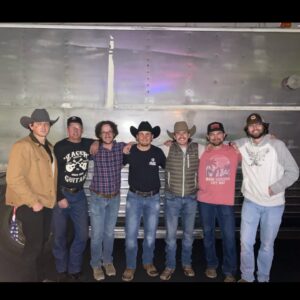 Jake and his band

“Neo-traditional – that’s the movement,” said Jacobson. “People like Cody and myself. The 90s country was a superior time in country music. Garth Brooks changed everything.”

It was involvement with King, one of the rising stars in the business, that started things in the right direction after arguably the low point for Jacobson.

“I played my first real show in July of 2019,” explained Jacobson. “Before then I played for anyone that would take a seat and listen. Then COVID struck right after I played a show opening for Logan Mize.”

For someone struggling to make it, COVID hit home right into Jacobson’s bankroll. In fact, how Jacobson was making ends meet like a country song in the making.

“I worked as a moonshine distiller among other things,” he said.

But it was also during this time that Jacobson got the first big break.

“In 2020 I did a cover of Randall King’s Hey Cowgirl and it got out,” said Jacobson of the King song that has over nine million downloads on Spotify. “They loved it and flew me out to Nashville to have a meeting.”

And thus, a friendship was formed. It has produced opening gigs for Jake and his band, and now the publishing deal.

King, another of the old school type country singer, is pumped for Jacobson.

“I’m beyond excited to announce this new partnership with BMG and the signing of one of my favorite young guns out there,” King told LB Cantrell of MusicRow magazine. “His work ethic alone makes me excited to see what this young man can do. A very unique, traditional country writer, with a clean smooth voice, he has a lot of promise. I’m ready to watch Jake Jacobson fly!” 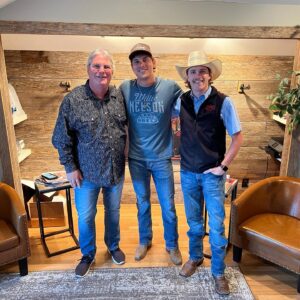 Randall King (center), along with Chris Oglesby, and Jake in Nashville

Jacobson is obviously excited to be a staff songwriter as it is another move towards reaching his goal.

“Getting a publishing deal is the first step towards getting a record deal,” explained Jacobson.

Last year Jacobson played the Reno Rodeo, a big-time musical event in the area, then went out on the road to open for King.

Jacobson has shown he has the drive to do what it takes, but with all the hard work, there is a need for a release. He gets just that from golf.

Being from Portola and now living in Reno, Jacobson has plenty of world class courses open during the summer months in the surrounding area.

“My dad and his buddies had a tournament every year that was your typical buddy event,” said Jacobson of his exposure to the sport. “In learned the basics at four or five and have loved the game since.”

Jacobson had the athletic prowess as a youngster as he was a member of the United States Developmental Gymnastics team for 6-7 years growing up, allowing him to take to golf.

“I started learning the basics of golf at four or five,” said Jacobson, who currently has an index of 3.5 on the course. “Golf is truly the only place I can get away from everything. I turn off my phone when I am out there and just relax.”

If you have played golf in the Portola/Graeagle area, then you know how cathartic that region can be for a golfer. Beautiful vistas away from the population bases in the area.

Along with playing on the coast, mountain golf provides the best chance of serenity and relaxation.

“I try to play once a week when I am home,” said Jacobson, who has a low score of 71 at Lakeridge in Reno. “I am gone about 200 days a year, but I try to take my sticks with me when I am driving from show to show.”

Jacobson list his favorite courses played as Grizzly Ranch, DarkHorse, Red Hawk, Dayton Valley, and Incline Village Championship course. As for the courses he is looking forward to tackling are The Stadium course, TPC San Antonio, Edgewood, and Torrey Pines – an impressive series of courses.

Given his impending schedule, the golf will be a much-needed break if, and when he gets some time off.

Things are certainly going in the right direction musically.

In August of this year Jacobson was recognized on the weekly Country Top 40 with Fitz as the Launchpad Artist with his single “Speed of Neon Light,” from the four-song EP “Lovin’ and Leavin,” he recently dropped on Spotify. The song already has almost 50,000 downloads.

“Speed of Neon Light has been huge,” said Jacobson.

What the next year or two holds remains to be seen, but whatever happens will be in large part due to the work ethic of Jacobson and his band.

Having had the chance to see them in concert recently, the band is tight and work seamlessly to put on a great show.

Is there a goal in place or will Jacobson fly by the seat of his pants.

“I think it’s a little of both,” said Jacobson. “I have set some goals. I would like to play 150 shows next year and earn a record deal in the next five years.”

And that plays into the work ethic.

“I am just trying to work harder than anyone else,” said Jacobson. “We’re doing it the old school way – you find out who you are when you play the clubs. Building an audience is our strategy right now. We are very brand forward and band focused.”

And a throwback to the old school days, which is just fine with Jacobson.

For more information on Jake Jacobson, go to his website at www.jakejacobsoncountry.com. To hear his music, go Sportify and search for Jake Jacobson.