Editor’s note: In the crowded casino market, a number of Indian tribes in California have added golf courses to their gaming resorts. In Northern California, both Cache Creek in the Copay Valley northwest of Vacaville and Rolling Hills in Corning off Interstate 5, 30 miles south of Redding, have well-reviewed golf courses. We set out for Southern California one spring week to play three casino courses: Eagle Falls at the Fantasy Springs Resort in Indio at the southeastern end of the Coachella Valley, the Journey at the Pechanga Resort in SoCal wine country in Temecula and the Barona Resort, which is located about 30 minutes from downtown San Diego. Two other tribes, the Aqua Calientes in the Coachella Valley (Indian Canyon’s two courses) and the Morongos in Cabazon (The Morongo Golf Resort at Tukwet Canyon) own courses off site from their casinos. We could stroll from our rooms to the first tee at the three resorts.

Eagle Falls at Fantasy Springs is a links-style course carved out of a flat desert floor on the east side of Interstate 10 by designer Clive Clark. When we played it in April it was in superb shape. 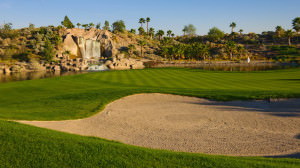 The falls at Eagle Falls course in Indio

Clark created the golf course by mixing water hazards with narrow fairways and the occasional brutal par 4. The fairways are bordered by the desert-version of Scottish Heather—in this case, dense wildflowers along with whatever else sprouted on the man-made dunes. The habitat, which requires irrigation to maintain on the hot days, attracts little varmints that drew rattlesnakes—warning signs were posted in several places.

The No. 1 handicap hole, the par 5, 571-yard 7th is characterized by narrow fairways with few spots to bailout. The No. 2 handicap hole played 446 yards from the whites with the fairway narrowing next to a water-hazard as you approach the green. Pay careful attention to the GPS in your cart.

It can be a stern test, particularly when it’s breezy as often is the case on that side of the valley in the afternoon.

If you are staying at the hotel, the bell crew will hold your clubs and the golf course will send a cart to ferry you and your clubs to the pro shop. 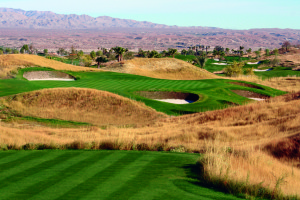 No. 6 at Eagle Falls

One key marketing thrust for the casino is name entertainment on weekends in its 3,500-seat event center. There’s also a 24-lane bowling alley on site as well as 2,000 slot machines in the 100,000-square-foot casino.

Journey at the Pechanga Resort

Leaving the Coachella Valley, we drove west on Highway 74 (the Pines to Palms highway) crossing the San Jacinto Mountains and dropping down into Temecula, its wineries and the Pechanga Resort with Journey Golf Course. The resort and golf course are tucked along a ridge beside I-15 that connects San Diego with the Inland Empire. 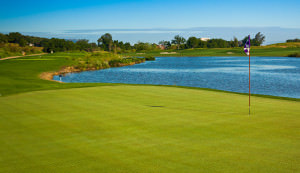 15th green at the Journey

Designer Arthur Hills took full advantage of the hillside, routing several holes up and down it. The golf course opened in 2008 to rave reviews and provides a quality resort-golf experience.

The terrain will seem similar for golfers who have played the Course at Wente Vineyards in Livermore or San Juan Oaks in Hollister. Journey measures 7,219 from the tips. The resort is owned by the Pechanga Band of Luiseno Indians. Hills’ design carefully avoided a number of magnificent oak trees on the property, some of which are estimated to be 1,000 or more years old.

The most memorable hole is No. 6, a 488-yard par 4 with the tee high on the hillside so it requires a 250-yard carry downhill over junk to reach the fairway. The final 90 yards from the fairway again runs sharply downhill so landing your approach short and letting it run onto the green is recommended.

The front nine concludes with a 574-yard, par 5 that features a large oak tree in the middle of the fairway.

The final hole is also memorable with a forced carry from elevated tees to a fairway that looks narrower than it actually plays. 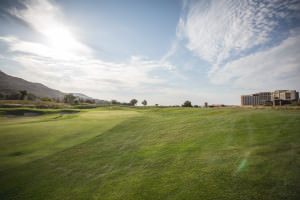 The new 18th green without the swale

The 18th green originally had a swale in the middle of it, but that was removed in 2014 after much discussion.

Three final dining options are offered in the resort. We opted for the Great Oak Steakhouse that features the expected steaks as well as several good seafood choices. We started with asparagus wrapped with prosciutto that was paired with a Frog’s Leap Sauvignon Blanc.

The sea bass with white truffle risotto and mushrooms is a popular seafood combination and was complimented nicely by a 2007 Hammacher Pinot Noir from the Willamette Valley in Oregon.

Be sure to play early in the morning so you can enjoy visits to some of the 30 wineries clustered along three roads east of Temecula. For those familiar with Livermore Valley Wine Country, the experience is similar with many smaller, family-owned vineyards.

We then headed south on I-15 to the Barona Creek Golf Club at the Barona Resort and Casino, which is located off two-lane Wildcat Canyon Road several miles from I-15. 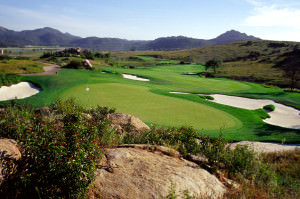 The Barona tribe takes particular pride in its environmental stewardship and operates a $3.5 million water reclamation plant as well as ponds that act as reservoirs to catch rainwater. Recycled water is used on the golf course and for irrigation throughout the resort property. Barona has been recognized by both the federal Environmental Protection Agency and Audubon International.

To minimize water use, the fairways were planted in Bermuda with native grasses filling in the forced carries between fairways or tees. In addition back in 2009 Barona undertook a major turf reduction program. The effort converted 12 acres of out-of-play turf to waste bunkers or more natural landscape. 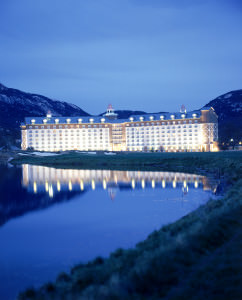 the hotel at Barona in Wildcat Canyon

The result is a golf course with plenty of variety, creeks and water hazards. Consistently ranked as the 5th best course in California by Golfweek magazine, it’s a frequent site for qualifiers for major tournaments such as the U.S. Open and the Nationwide Tour Championship (now the Web.com Tour).

With four sets of tees, it plays 7,393 yards from the tips a 143 slope from the tips.  Add plenty of water hazards plus some elevation change, prevailing winds and almost 150 bunkers, and you will be challenged.