PGA West and the LaQuinta Resort are an ideal winter-time destination for avid golfers.

There are three other courses are available for the public golfers (more for private club members with reciprocal agreements). Those include the Mountain and Dunes courses at La Quinta as well as the Greg Norman desert course.

Both the stadium course and the Nicklaus course were used for years in PGA Tour Q-School that rotated between Florida and California in the late fall. Playing them in November or December, the fairways, greens and tees are lush after the winter grasses had taken after the over-seeding of the summer Bermuda fairways. The rough with its brown Bermuda contrasts sharply with the vivid greens. .

The Stadium Course, playing to a slope of 135 from the regular tees at 6,166 yards, provides the stern test you would expect from a Pete Dye course.. For first-timers, it was even a bit more challenging because the GPS-equipped carts were limited to the cart path early in the prime season.

Many of the Stadium Course fairways are bordered by humps that penalize errant shots with very uneven stances to say nothing of the consistent hiking up and down to reach balls in the fairways.

The Nicklaus Tournament design features much more generous landing areas, which can require quite a walk from the cart path. As one of our playing partners observed—it would have been easier to walk than criss-crossing back and forth to the cart path.

The sprinkler heads are marked so yardages to the green were not an issue—what was, particularly on  Nicklaus No. 16 was trying to figure out how far to hit a lay-up to come up short of a large pond that surrounds a narrow green on three sides. If it’s cart-path only, which is atypical there, then be sure to pick up a yardage guide in the pro shop. 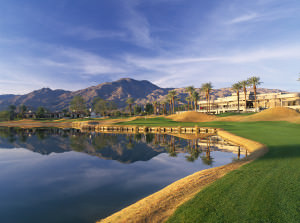 Of course, we managed to hit two excellent days with temperatures in the mid-60s one day and into the 70s the next day. With a bit of overcast from rain showers that came in overnight, I was dressed in shorts and a golf shirt. Our starter, by contrast, had four layers of clothing on his torso. Sixty degrees with some breeze can seem chilly when you live with 100-plus temps routinely in summer days.

The Norman desert course was one of the more enjoyable of the many tracks we have played in the desert. It has a stand-alone clubhouse and grill well apart from the main PGA West clubhouse that serves the other four courses.

Norman’s course has limited turf and is designed as a target-style track. It is the only Norman course  in the Coachella Valley and has 102 white crushed marble bunkers. Six tee boxes and slopes that range from 139 to 119 make it playable for people with a variety of skills. 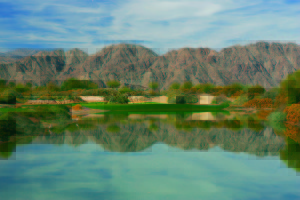 Staying at the historic La Quinta Resort, which dates to 1926, was ideal. The resort is nestled right at the foot of the Santa Rosa Mountains and features the Dunes and Mountain courses on site with the PGA West complex a 15-minute shuttle ride away.

Pete Dye designed both the Mountain and Dunes courses. They opened in 1981. The Dunes course is designed with a links style that routes away from the clubhouse for 14 holes with demanding deep rough bordering the fairways. The final holes come back to the Santa Rosa Mountains with one green next to the mountains.

The  Mountain course lives up to its name by running along rock formations and featuring pot bunkers and well as elevated tee boxes. 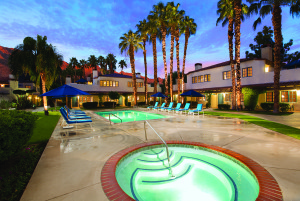 The property has three restaurants including the superb Morgan’s in the Desert.—named for resort founder Walter H. Morgan. Morgan’s is located in the historic main building that served as the hub of the initial resort.

It has since grown to more than 750 rooms—including more than 30 different types of rooms.

Many of the rooms are in mission-style and surround courtyards with hot tubs and swimming pools. You can’t go wrong starting the day with a cup of coffee in a hot tub a few steps from your room while looking at the sun playing on the Santa Rosa Mountains

There are 40 pools on the property.