The Gary Player Signature Course at the Westin Mission Hills in Rancho Mirage is a popular stop for golfers in the Coachella Valley.

One pro observed that it is one of the best courses he’s ever seen for a group with mixed handicaps to play so everyone can enjoy the round. We found the greens and tees in excellent condition. The greens were quick and rolled true. When I asked the starter what we needed to know he said play half the break you think you see and within 10 feet really think before giving away the hole. That advice served me very well.

Player’s design is straight forward and golfers can roll the ball onto the green on most of the Par 4s and 5s. That’s not the case with the Par 3s. Three are fronted by water, while the fourth has a huge waste bunker running from the tee almost to the edge of the green. 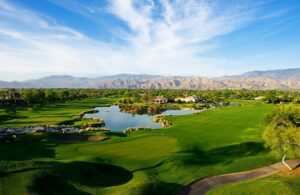 Player also brought water into play on several other holes, most notably the par 5 11th where most approach shots from the fairway require carrying a water hazard in front of the green.

Most fairways feature generous landing areas so feel free to unleash your driver. Our playing partners, local women (one has her home bordering the course), choose to play here routinely. They rotate in the Arnold Palmer-designed Classic Club, located a few exits south off I-10.

Carts are equipped with small GPS units located on the driver’s side post. That’s complemented by a yardage brochure making it easy for a first-time player to determine where to aim and what club to choose.

In contrast to the Westin facilities that surround the Pete Dye course, the Player course clubhouse is modest, housing the pro shop, a couple of offices, a small bar and grill (capacity of about 25) and the restrooms and changing area. It’s not designed for events, although with the Westin a mile away event participants could easily drive that mile to utilize the range of rooms there.

The courses and the Westin changed ownership in April 2019 when Clearview Hotel Capital (based in Newport Beach) closed on its deal.

One staff team member frankly told me that the course is 30 years old and never had the bunkers renovated. It showed, particularly in the fairway bunkers that were pretty bare. That’s north of $1 million in investment. The irrigation system also is original so it’s due for an update and the men’s restroom in the clubhouse literally had the linoleum floor rotting away under one urinal. 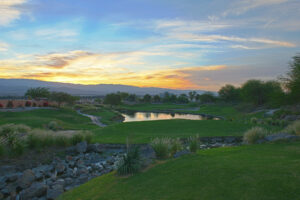 There is opportunity for additional development on the site and a new Del Webb Sun City community of 1,000 homes is being built across the street. There’s no golf course in the new development—the plan is for residents to have preferred access to the Westin courses. That similar to the existing program for Rancho Mirage residents. Once they purchase a card for $89, they can book tee times four days in advance and receive a 30 percent discount on green fees.