It’s one of two Dye courses in the valley—the other is the tough stadium course at PGA West in La Quinta. The other course here is the only Player-designed course in the California desert. Golf-cart shuttles serve both golf courses and the attractions around the sprawling resort. Parking is situated next to the many lodging buildings and guests either walk to the club house or take a shuttle.

The resort sprawls over 365 acres in Rancho Mirage. In addition to the Westin hotel, it also offers villas,   ideal for families. There are several hotel buildings on site with parking conveniently located near each building. There are three swimming pools, the spa and seven lighted tennis courts.

The centerpiece, of course, is the golf course that is located in the center of the property with the buildings pushed to the perimeter. When we played it in late November, the winter overseed was still growing in, so carts were limited to the cart paths or the rough (cart paths are only between holes and around the greens and tees). Once the course opens to cart traffic, the GPS on the cart will make for more precise club selection.

The landing areas generally are generous, although there are exceptions where Dye brings water into play. That’s certainly the case on No. 18 with water all the way down the left side to the green. The 14th, the No. 2 handicap, brings two lakes into play. In addition, there are plenty of bunkers on the course including giant fairway traps on some holes. 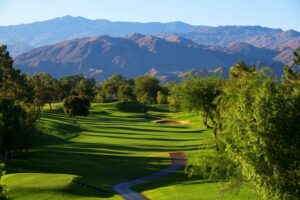 Many greens are elevated so there’s a premium on good approach shots. There’s also plenty of slope to the greens. We played after it had rained overnight so the greens were not rolling as quickly as they normally do, a fact the starter made clear before we teed off. It plays at par 70.

Both courses are open to the public with green fees set at $160.

We had the opportunity to dine at the centerpiece restaurant that morphs from a casual spot for breakfast and lunch to white table clothes and fine Italian dining in the evening as Pinzimini. The modern Italian fare varies from 10-inch pizzas, to pastas to fish, pork and beef.

Executive Chef Joel Delmond, who is a James Beard honoree, has crafted a diverse and interesting menu. The chef is attuned to vegetarians—for instance, offering a cauliflower steak ($24) with quinoa, Campari tomato, arugula apple salad served with chermoula sauce. 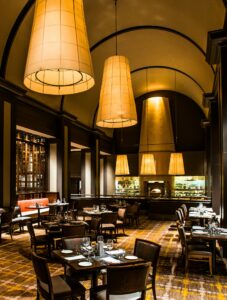 The kitchen goes all out on its 35-ounce tomahawk steak ($145) that comes with two glasses of wine and three side dishes. You’ll have plenty of time for appetizers and cocktails because it takes 45-55 minutes to cook it. The bar offers hand-crafted signature cocktails, local craft beers and wine flights.

After a cocktail, we started with the chef’s special appetizer, jumbo shrimp with mashed potatoes and arrabiata (tomato) sauce. It was delightful. 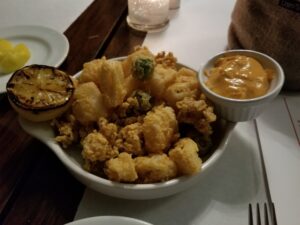 We followed with the crispy calamari with olives, kale slaw and a sherry vinaigrette with a paprika aioli. The large portion easily satisfied two of us.

We could not resist trying tomato burrata salad that featured tasty heirloom tomatoes (in November) with watermelon, beets, and the buratta cheese dressed with olive oil and Balsamic Modena. It was light and delightful mix of flavors and textures.

When it came to entrees, my bride selected Gnocchi al Scalappini ($29) that included baby scallops, potato gnocchi, pancetta, peas, pecorino cheese with garden herbs. It was good choice, but it was outshone by the catch of the day– four perfectly cooked jumbo scallops served with broccolini over orzo. Wow—I love scallops and these may have been the best ever. 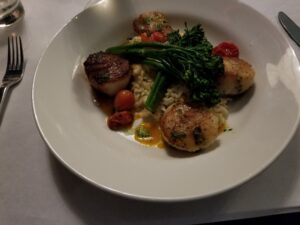 Pinzimini bills itself as an Italian restaurant, but think classic steakhouse when it comes to portions. They were ample, whether an entrée, appetizer or salad.

We finished with the Crimson King Apple Tart, another portion large enough to comfortably split. Several sorbets, bourbon French toast and tiramisu also are offered for dessert along with a selection of ports and dessert wines.

Whether you enjoy an artisan pizza or pasta or dig into substantial entrees, Pinzimini is an excellent choice for dinner.