The statewide shutdown designed to slow the spread of the coronavirus is impacting families and business across California to say nothing of the nation and the world.

As a golf lifestyle website, we checked into the impacts on people and industries we cover. The statewide closure shuttered both golf courses and wineries to say nothing of reducing all restaurant operations to takeout.

Golf courses are only allowed to employ the maintenance staff necessary to keep the courses playable so golf can resume when the shutdown in lifted. That means no revenue from green fees or food and beverage. That’s a hit that could stretch to nearly two months for courses that were open for play when the order was announced the week of March 15.

For seasonal courses, such as those in the Coachella Valley in the California desert, it wiped out half of the busiest month of the season (March).  March, with its warmer weather and longer days once daylight savings time starts, can fill tee sheets from 6 a.m. to dark and account for 25 or more percent of the annual rounds.

Now, the golf courses are like the personal service businesses (barber shop, hair salons, fitness studios) that sadly will have no revenue. 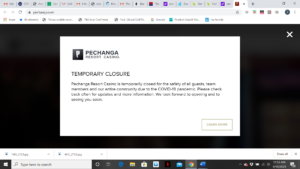 In the Coachella Valley, cities such as Palm Springs and La Quinta, issued emergency orders that suspended all hotel, resort, timeshare or private home (such as Airbnb) stays that were less than 30 days in duration. That shuttered the industry that typically brings 500,000 people to the valley during the winter months. Many are snowbirds from elsewhere and potentially could turn the valley into a hotbed for the virus.

There’s also the demographic of the seasonal and year-round residents. Many are retirees and in the age-groups that are most at-risk for serious illness from the coronavirus. One of the advantages of the valley for retired people is the high-quality medical services that have been supported by wealthy people who choose to live there.

The virus also has caused the cancellation of major events including the annual BNP Paribas professional tennis championships in Indian Wells that were scheduled for mid-March. The men’s and women’s tours are cancelled through June 7.

The PGA Tour’s annual visit to La Quinta went off without a hitch in January. The tour has suspended all play through March and April into early May.

The LPGA rescheduled the first major on its calendar—the ANA Inspiration– to Sept. 10-13. It had been scheduled for April 2-5 in Rancho Mirage. It also postponed the tour stops in San Francisco (Lake Merced Country Club, April 30-May 3), Hawaii and Los Angeles.

On April 3, the tour announced the next five tournaments have been postponed with four rescheduled later in the year. That follows the announcement by the USGA that its Women’s Open will be played Dec. 7-13 in Houston.

Two other huge April events in the Coachella Valley, the two-weekend music festival in Indio and the Stagecoach Festival, have been postponed until Oct 9-11, 16-18 and Oct. 23-25.

Golf has a huge impact on the seasonal economy in the Coachella Valley. The Greater Palm Springs Convention and Visitors Bureau commissioned a 2015 report on what the 120-plus golf courses mean to the local economy. About half of the rounds are played by owners of second homes, while another 25 percent come from local residents. It’s the seasonal overnight visitors who have an oversize impact with an average spend of more than $1,000 compared to $432 for second-home owners.

Postponement won’t help wineries and restaurants. The Livermore Valley Winegrowers Association cancelled its barrel tasting in March, while the Dry Creek Winegrowers postponed its very popular Taste of Dry Creek Weekend that was scheduled for the end of April.

Small wineries, which often rely on tasting room sales and their wine clubs, are offering a variety of specials to encourage patrons to either pick-up an order to have it shipped to them at a bargain rate.

For some restaurants, that already had robust to-go and delivery business, that’s become a skinny lifeline to keep some cash flowing. However, one small chain operator (six locations) said his revenue had fallen between 80-85 percent in March. A take-out order is $11-12, while when a customer dines in, the average tab is $30-35.

For those who were relying on a dinner business without the delivery/takeout option, they’re paddling up a waterfall. Without the infrastructure and a ready-made digital customer base, good luck.

For restaurants in seasonal locations such as the Coachella Valley, they won’t have a chance to earn any substantial revenue until late fall, which may be too late for many of them. Some have simply closed such as the popular Arnold Palmer’s Restaurant in La Quinta, while others such as the VUE at the Indian Wells Golf Resort are offering an all-day to-go menu, family meals, half-price wine (and it’s a very good list) plus grocery shopping with curbside pick-up.

The tribal casinos, because of the shelter-in-place orders as well as the lodging ban, are closed into April. Given the extension of the shelter-at-home order in the San Francisco Bay Area and the likelihood that it will go statewide again, the casino and other businesses likely will not re-open until May at the earliest.