La Quinta holds a unique distinction among the upscale communities in the Coachella Valley because it  boasts the only restaurant that bears “The King’s” name— Arnold Palmer’s Restaurant.

It is located off the busy Avenue 52 that connects the La Quinta Resort to the PGA West complex of golf courses. The most familiar golf course is the Palmer Private that hosts the final round of the CareerBuilder Challenge (formerly the Bob Hope Celebrity Classic).  A branch of the All American Canal is utilized on a couple of closing holes. Intense golf fans will recognize two of the other PGA West tracks—the TPC Stadium course designed by Pete Dye and the Jack Nicklaus Tournament course that were utilized during the PGA Tour’s Q-school when it was on the West Coast.

We dined at the restaurant on the Tuesday before Thanksgiving, having earlier enjoyed one of Arnold’s golf designs, the Classic Club across Interstate 10 in Palm Desert. https://acesgolf.com/palmer-designed-classic-club-features-plenty-of-water/

As restaurant general manager Dustin Nichols described the evening at the restaurant, it was “the night before things will get really busy—Thanksgiving Day is very busy, but the Friday and Saturday evenings that follow will be even busier” —some of their top 10 days of the year. Incidentally, as with other similar stand-alone restaurants in the very seasonal Coachella Valley, the restaurant closes for summer and fall months.

Palmer lived in a private club in La Quinta during the winter months before returning to Florida for his namesake PGA Tour event in March at his Bay Hill Club in Orlando. According to Nichols, he could be found hanging out in his restaurant two or three days a week when he was in town. The restaurant is filled with trophies and memorabilia (his replicas of the Claret Jug from the British Open, a Master’s trophy and a U.S. Open). Hanging over the fireplace in the main dining room is a framed green jacket.

The restaurant, thanks to an abundant patio that has plenty of heaters, can serve about 300 diners at one time. It also features an artificial surface putting green (originally it was grass and took up most of the expansive patio).

The wine list delivered interactively on an IPad. It is easy to use and allows patrons to browse offerings by the glass within categories as well as offerings by the bottle. There is plenty of breadth to the list and some surprisingly affordable options. Palmer has partnered with the Luna winery in the Napa Valley to offer his own label of California chardonnay and cabernet sauvignon. The price at the restaurant was $32 for a bottle. If you visit the winery, there are reserve bottles available.

For the upscale wine lovers, there are plenty of options at $100 to $400 per bottle. The IPad allows the list to be immediately updated if a particular wine sells out or a vintage changes.

The menu is a nice mix of dishes utilizing local ingredients (bacon and date skewers and dates in a Coachella Valley date and strawberry salad, while also mixing in Palmer’s personal favorites such as his chopped BLT salad with double-smoked bacon, diced red onion, tomato and blue cheese dressing. 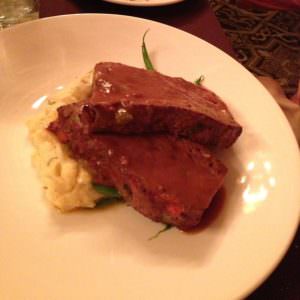 When it comes to entrees, his favorites are meatloaf, slow-roasted pot roast (both served with mashed potatoes and gravy), the Montgomery Inn ribs and the Filet Mignon Beef Stroganoff. Nichols pointed out the different approach to the stroganoff—they cook a 6-oz filet, then slice it over egg noodles dressed with brown gravy, sour cream and chives. The menu features plenty of quality items, but Arnie favorites give the menu the unusual twist.

Our server, Erik Estrada (no relation to the former CHPs star now on the Indian casino circuit with a game show), has been in the hospitality business in the Coachella Valley for years.

He started us with a selection of appetizers, all paired with a Domaine Chandon Chardonnay. The Dungeness crab cakes were superb—loaded with crab. We also sampled the lobster bisque, the lobster Mac & Cheese and the Coachella date and bacon skewers. All excellent choices, but I was particularly surprised by the date and bacon skewers. I am no fan of dates, but wrap them in an excellent piece of smoked bacon and roast them and the combination was delightful. Of course, bacon enhances almost anything.

We tried two salads—the Coachella date and strawberry with kale, arugula and other greens, goat cheese, walnuts dressed in an herb citrus vinaigrette and the chopped butter leaf salad with golden beets, pine nuts, blue cheese in a Dijon vinaigrette. Both were excellent, although given a choice, I would opt for the butter lettuce and the beets. 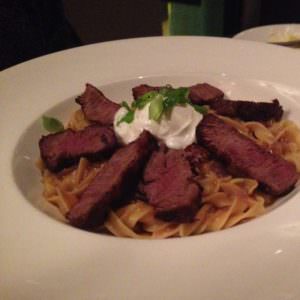 Erik’s choices for entrees included the 10-oz filet with balsamic glazed asparagus and garlic whipped potatoes along with the blackened double-cut pork chop. The pork chop was added to the menu in the last year and has become a favorite—easy to see why. He paired the chop with Belle Glos “Las Alturas” from Santa Maria, while the filet was paired with a Provenance Napa Valley merlot. The ribs were paired with a Rosenblum petite sirah.

The fish choice (the menu offers shrimp scampi, grilled salmon and swordfish, and Maine Diver Scallops) was the honey-soy glazed sea bass with lobster dumplings, shitake mushrooms and blue lake green beans. It was simply wonderful when Erik paired it with a Frank Family Chardonnay from the Napa Valley. Since we dined there, the fish offerings on the menu have been broadened to include halibut and filet of sole.

There are a variety of options for desert—we opted for the Grasshopper –mint chip ice cream with homemade chocolate cookies.

For golfers, visiting the restaurant is a wonderful walk down memory lane with The King—that’s good for one visit—the food will bring you back. For buddy trips, the putting green can extend the round into happy hour.http://www.arnoldpalmersrestaurant.com