Reno has seen its share of transformation over the years.

It was a tourist destination for many decades, drawing many people from throughout Northern California, mainly to take their chances at the gaming tables.

But then came the advent of the Indian casinos throughout Northern California and Reno couldn’t help but take a hit. It reached the point where people from the Bay Area could head to Cache Creek, Jackson Rancheria or Thunder Valley. All properties are much closer and more convenient than Reno.

In addition to being a shorter drive, during the winter months, there was no need to deal with the weather going over Donner Pass on Interstate 80. No longer was it a hassle for Northern Californians to gamble.

This was followed by the development of Truckee, the former cowboy town that seemingly overnight had an influx of top-notch restaurants and world-class golfing options open.

When the lodging properties in Truckee and the upscale new neighborhoods became plentiful, many people stopped short of heading into Reno and enjoyed all that the Truckee area – and North Shore Lake Tahoe – had to offer.

There were some hard times for Reno, but instead of feeling bad for themselves, the community and business leaders fought back and are making progress in a big way. 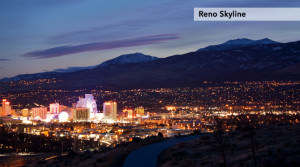 Initially the Riverwalk area downtown was renovated and brought new restaurants and brew pubs to the area. Instead of being a down-trodden location, it became a spot for people to come and hang out. There was the construction of the Reno Aces ball park, a wonderful minor league facility.

The University of Nevada, Reno continued to develop as a Tier 1 university and has become one of the “in” places for kids from Northern California to attend.

Finally and easily the biggest change, Reno has begun to draw in big corporations with business friendly offers. Tesla, to name one, has opened a big battery manufacturing plant and others are soon to follow. Apple and Switch are also pumping over $1 billion each into the area.

With these changes, the marketing of Reno has been made over. Once the Indian casinos came to California, Reno no longer market itself as a “gaming only destination.” 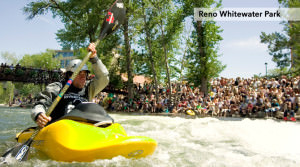 Thus begun the renovations in the last five years, beginning with the Riverwalk.

“The city understood that it had become a sore spot for the city,” said Ben McDonald, the Communications Manager for the Reno-Sparks Convention and Visitors Authority of the area along the Truckee River. “So they put in $10 million, built the kayak course, the amphitheater and made it family friendly. It has become a tourism draw.”

With that, the mindset of the city changed.

“The casinos realized they couldn’t market the city as a gaming area,” said McDonald. “Instead they looked at the natural resources and the events we have here. People don’t come here to gamble, but those who do come here will gamble.”

You have options such as hiking, biking, horseback riding, ATV usage and rock climbing to name a few land-based activities and when you add water sports like kayaking, white-water rafting, fishing, swimming and boating, it is a can’t miss location.

With the beauty of Lake Tahoe and the Sierra Nevada Mountains as the backdrop for so many things to do, it is easy to see why Reno has become such an outdoor activity destination point. 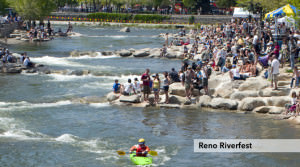 “So many people come here now for the outdoor activities,” said McDonald. “People understand there is so much more to do here.”

And that doesn’t take the golf into account. For years the lodging properties in Reno seemed to push the local courses, but tough economy forced closure of at least two good Reno courses, while others have suffered from a lack of maintenance.

The answer was easy and the Reno area has embraced the promotion of the world-class golf destinations that are well within an easy drive from Reno. Truckee, the Carson Valley, Lake Tahoe and Graeagle all boast sensational golf courses and are now part of stay-and-play plans from the casinos.

“There are 50 courses within 90 minutes of us,” said McDonald. “We promote all that.”

In the winter months, the same is true for outdoor activities. There are plenty of world class ski locations within a reasonable distance as well.

The area boasts the highest concentration of ski resorts in North America with more than 18 alpine and cross country resorts within 90 minutes of Reno. That breaks down to more than 180 lifts and more than 500 unparalleled runs, many with views of Lake Tahoe.

With ski resorts located as close as 25 minutes away from the Reno-Tahoe International Airport, there is an incredible ease of access.

Getting around is hassle-free with many of the hotels and ski resorts offering shuttle service to various locations, such as Lake Tahoe towns and beaches, downtown Reno and the airport.

Add in the National Bowling Stadium in downtown Reno and the Reno Aces minor league ballpark and there seems to be an almost non-stop bevy of activities outside of gaming.

The National Bowling Stadium is not open to general play, but the facility brings in more than 140,000 people a year just for the National Women’s, then Men’s respective tournaments.

The downtown, once a depressed-looking area with failing or closed businesses dominating the landscape, has also turned around with brew pubs and a host of quality restaurants taking.

Then there are the festivals with long-time events such as Hot August Nights, Street Vibrations and the Rib Cook Off pulling in a lot of visitors as well. Reno can easily accommodate many visitors with plenty of lodging options.

“We have 15,500 rooms that we consider our Grade A, upscale hotel rooms,” said McDonald.

Finally, Jet Blue airlines started a daily direct flight to and from New York in May. That opens the door to an even greater audience.

“We are going to be marketing the New York area as well,” said McDonald

But the real key to the resurgence is attracting the business world to the area.

Tesla is bringing 6,500 jobs via a 5 million square-foot, $5 billion lithium ion battery factory east of Reno. Apple has committed to investing $1 billion worth of data storage centers in the region over the next 10 years, and Switch recently announced a $1 billion expansion of its data centers into the Reno area as well. 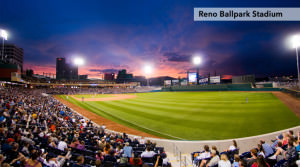 As a federally-approved drone-testing state, more than 400 jobs have already been created in the Unmanned Aerial Systems industry, and the University of Nevada, Reno is working on a partnership program that will immerse students in the growing UAS research and development industry.

“The thing everyone is after is the Millennials. With a lot of them moving into the area that will lower the age of people moving in or visiting the area, said McDonald.

In turn that creates an evolving population base that will energize the area, starting from the school systems and moving on through. The University of Nevada – a Tier 1 university – has become one of the “in” places to attend college for not only kids from Northern California, but throughout the country.

By reinventing itself Reno has now become a destination location instead of an afterthought in the High Sierra region.