When it comes to institutions in the South Lake Tahoe area, the Red Hut is high on the list.

The original diner opened in 1959 in what was formerly a donut store without a heater. It’s remained largely unchanged for more than 60 years. What’s also largely unchanged is the no-frills menu with large portions. The owners for the last 30 years were patrons for the prior 20 years. They added a second location, in a similar format on Highway 267 just off Highway 50 and then a third modern spot at Ski Run and Highway 50. On other visits, we have eaten at both locations. 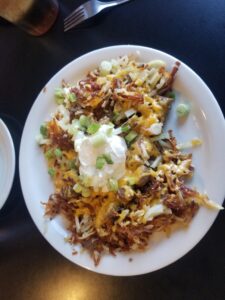 That’s where we ate breakfast on a mid-June Friday. We walked right in and were seated immediately—I was surprised because I expected to wait. I mentioned that as I paid the bill and the hostess said that summer apparently hadn’t quite started. That matched what I was told years ago when I was chatting with a ski shop owner who was shutting down his business for the season around Memorial Day. He said summer never really started until July 4 and wrapped up by Labor Day. With most schools starting in August, that’s shortened the peak season even more.

Red Hut serves breakfast or lunch during its operating hours, 7 a.m. to 2 p.m. The lunch menu featured the expected 1/3-pound hamburgers as well as other sandwiches and salads. For breakfast, there’s the usual pancakes and eggs as well as the waffles it is known for. You can build your own omelet with a wide choice of fillings. 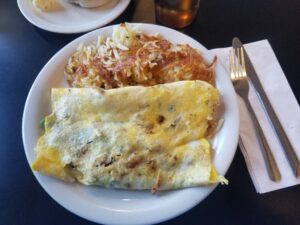 My daughter opted for three huge pancakes with bacon on the side. The hotcakes were fluffy and delicious.

I went for the Western omelet with ham, green peppers, onions and choice of cheese (also known as a Denver omelet) with hash browns. The chef allowed the eggs to spread so it was thin and could easily be folded over the filling and melt the cheese. It was plenty and tasty. I wrestled to finish up the hash browns.

My bride chose one of the signatures, Red Hut’s version of the Swiss rosti. This was crispy hash browns with your choice of bacon, sausage or ham covered with cheese and green onions with a large scoop of sour cream. You can enjoy all three meats for $3 more or top it with an egg for $1.75 more than the $12.

Service was quick and we took our time over breakfast and still departed in less than an hour. That wouldn’t be the case when they get busier and you’re waiting for a table. 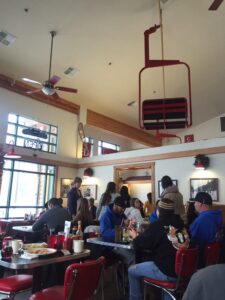 There’s been one change since we were there a few years ago. The Red Hut ice cream shop has been replaced by a Chai tea and coffee shop. It was busy enough that when our daughter checked it out, she returned to our table and ordered a hot chocolate.

The mountain style design of the Ski Run location allow for both patio dining on two sides and three chairs from a lift stretched on a rope below the ceiling.