When the ACC takes place July 6-10, Korbel will be right there, starting the party like it has since 2004.

“We have had a partnership with NBC since the mid-90’s, including an Olympic sponsorship,” said Todd Kennedy, the Brand Director for Korbel. “When I came aboard, they told me about the Tahoe event, and I thought it sounded great. Tahoe has always been a huge fan of Korbel, so we became involved since 2004.”

The sponsorship by Korbel – which is headquartered in Guerneville, along the Russian River in Sonoma County– started very conservative as to what it has grown too today. 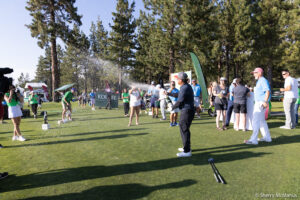 “We originally sponsored part of a tent on the 9th hole,” explained Kennedy. “We eventually got over to the 17th. I told them the space I wanted, and the ACC people loved it and respected Korbel to make it happen.”

What Korbel has done is take the par 3, 17th at Edgewood that runs along the beach and Lake Tahoe and make it one of the biggest parties in golf. Not the stature of stadium surrounding No. 16 at the Waste Management Open PGA Tour event in Scottsdale, but every bit as entertaining.

If you have never been, then it needs to become a bucket-list item. I have been to both and while the ACC falls behind the Waste Management in sheer volume, it makes up for it in fun and vistas unlike you find anywhere else.

A boat armada pulls in close to the beach lining one side of the hole, while fans line the inland side. Behind the green, there are viewing platforms and the Korbel hospitality tent.

There is music, a basketball hoop, and great interaction with the fans, both on land and water. NFL quarterbacks like Aaron Rodgers throw passes back and forth with the people out on boats, and there has impromptu dance-offs on the tee, including Alfonso Ribeiro and Justin Timberlake. 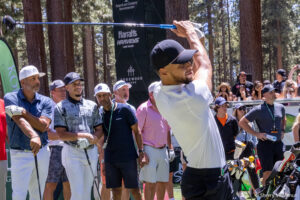 Of course, the highlight has seemed to be when Steph Curry shows up and starts knocking down jumpers.

“Steph is the best – he gets it,” said Kennedy.

And Korbel is always looking for new things to bring to the party.

“You want to keep things fresh,” said Kennedy. “We want to get the fans excited, and we want the celebrities to engage with the fans.”

The Korbel Closest to the Pin contest will again be held at the 17th, with the winner getting to donate at least $5,000 to charity.

And they are expanding. This year a long-drive contest will be held on the 16th, a wonderful par 5 that plays downhill towards Lake Tahoe and is framed by pine trees, Lake Tahoe, and the Sierra Nevada. During the Celebrity-Am the celebrity and the amateur who hit the longest drive get to donate $5,000 to the charity of their choice.

There will be a DJ on the hole, as well as other activities along the way. There will also be another tent, this one on the tee box.

“It’s a great place for the players to hang out while they are waiting to tee off,” said Kennedy.

But it’s more than just exposure for Korbel. It is also a week where they bring in employees from across the country.

“It’s the best incentive plan we have in place,” said Kennedy. “Everyone loves being there. There is no place better in the country to bring our guests. You can’t get better than this – they get to bring their significant other to one of the most scenic places they will see.”

For more information on the event go www.americancenturychampionships.com.