For golf fans who happen to also love wine, the Cape Town area in South Africa can be synonymous with both.

Starting with Hall of Famer Gary Player, an original member of the “Big Three” along with Jack Nicklaus and Arnold Palmer, South African golfers have become household names on the PGA Tour.

And some, notably Hall of Famer Ernie Els, have ventured into the wine industry as well. While in Stellenbosch, the wine region of South Africa about an hour’s drive from Cape Town, we visited Els’ showcase winery. 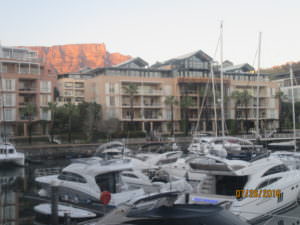 The Cape Town area also is loaded with quality golf courses and a favorite destination for Europeans seeking to escape their harsh winters and play a few rounds. Kevin Arnold, who owns the Waterford winery, said you could play golf daily for two weeks in the Cape Town area and still have more quality courses to play.

And I suspect it was no accident that the partners in Cass Winery in Paso Robles—Steve Cass and Ted Plemons—made the decision to start their winery while on a golfing trip to Cape Town and enjoying very reasonably priced South African wines with a fine dinner.

Just as there are more golf courses than you can expect to play, that’s more than true for wineries with more than 250 clustered in the Stellenbosch region. The wine industry in South Africa is about 350 years old—yes, 350 years, started by Dutch settlers.

By contrast, the California wine industry is a bit more than 130 years old. We drank South African wine throughout our visit and were struck by both the quality and the reasonable prices even in restaurants. Some of that was due to the 14-to-1 exchange rate for the Rand (it has been about 8 Rand to the dollar on prior trips), but there’s lot of competition. And, as Kevin Arnold put it, historically South Africans have objected to paying more for wine than for food. He’s working on changing that attitude.

The wine region is located about an hour’s drive from downtown Cape Town and its signature Table Mountain (we could not visit the mountain top because the cable car was down for annual maintenance). Check out this view from our hotel room in Cape Town. 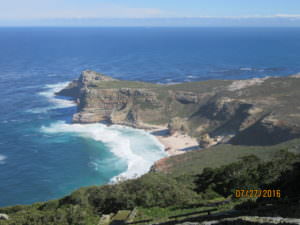 After a day of touring the Cape of Good Hope and the sheer cliffs surrounding the bays (think of the Na’Pali Coast on Kauai), we headed for the wine country around Stellenbosch. In contrast to the Livermore Valley or the Napa or Sonoma valleys, the mountains surrounding the wine country are immense rock faces that towered thousands of feet above the vineyards. When the weather cleared, there were impressive vistas.

The Els winery is built on a hillside overlooking the vineyards. The entrance has an Asian look   with flat wooden bridges over a Koi pond. Step inside and a hostess greets you with a glass of Chenin Blanc and invites you to check out the Els’ trophy room before being seated for the tasting. The room, which included a plaque with a running list of Ernie’s wins world-wide, is a great trip down memory lane. 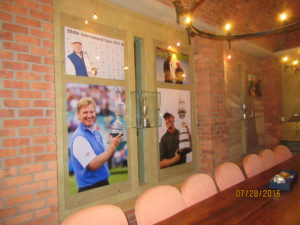 Once we sat down on a couch with a coffee table, we started tasting the range of wines offered there. Given the warm hillside location, the winery specializes in Cabernet Sauvignon. Having enjoyed Ernie’s Cab with a couple of meals earlier at a game park, we were delighted to taste the offerings as well as wander through the trophy room. There also was a small selection of Els’ golf items (shirts, hats, ball markers, etc.).

Unlike our second winery, Waterford, Els exports 90 percent of his wine. Waterford, by contrast, sells 80 percent in South Africa and handles its own distribution and sales.

What was distinctive from most California wineries was that each of the three poured any wine they made, including reserves. We tasted the current release of the best Els Bordeaux blend and the top of the line at the other two wineries.

The top of the list is the Signature 2012, which retails for 650 Rand or about $46 at current exchange rates ($81 at 8 Rand to the dollar). The next most expensive wine, the proprietor’s blend with Shiraz added to the traditional Bordeaux varieties was just 230 Rand or $16/bottle—a real bargain. 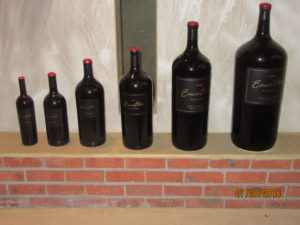 That quality and reasonable prices were found at the wineries and restaurants throughout our time in South Africa and Swaziland.

Our second stop was Waterford, which our guide recommended because of the chocolate tasting. Two reds and a dessert wine were paired with different chocolates. The tasting was so good that my bride brought home the chocolate and the dessert wine. 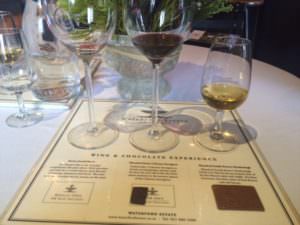 Wine and chocolate pairing at Waterford

We also sampled their Pinot Noir which I would have purchased except for the duty. Notably, Arnold has worked out an arrangement with a number of wineries in the region, so if a guest purchases 18 bottles, they will be shipped home to the European Union or Great Britain at reasonable rate. He said he is close to putting together something similar for the United States.

Stellenbosch is the heart of the wine region and a working city of about 120,000 with a university there.

We spent two nights at the elegant 21-room Le Quartier Francais over the mountain pass in Franschhoek, a tiny village that shares its Main Street with the highway. Think of Highway 29 through St. Helena—very similar. Lots of restaurants, art galleries and real estate firms, selling pricey homes and estates. A few trucks aside, it was an ideal place to stroll.

We enjoyed one of our signature meals at The Tasting Room, which is ranked as one of South Africa’s top restaurants (we were there in the depths of the low winter season with rainy days a common experience). It was an eight-course—yes eight—African meal. All courses were paired with wine. 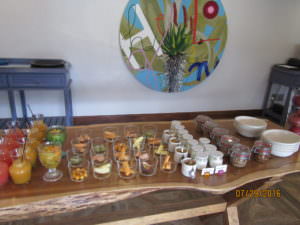 What’s more the chef served my wife and I entirely different courses with the exception of the first one. Having enjoyed several tasting menus as part of my ACES writing, I can say that this was easily the most innovative menu I have tasted.

Since opening the restaurant about 13 years ago, chef Margot Janse has built a world-wide reputation for her cuisine. The menu changes daily and is a nightly surprise.

We enjoyed a sensational meal over about 2 ½ hours and, thanks to the exchange rate, paid $230.