Indian Wells Golf Resort, which boasts 36 holes, is owned by the city of Indian Wells, but competes well with any private country club. The club is surrounded by four upscale lodging properties that are an easy stroll from the clubhouse.

Managed by Troon Golf, the resort matches the hotels in service—valets for the clubs and the car if you choose as well as plenty of help on the golf course. One nice feature is you are given a voice pager (similar to what busy restaurants use) when you check-in that summons you to the first tee. It is far preferable to the loudspeakers used at most courses.

We played the Clive Clark-designed celebrity course that opened in 2006. Clark used water features extensively, particularly on the back nine with waterfalls, streams and ponds. His routing was particularly striking because fairways were often framed by palm trees and the nearby Santa Rosa Mountains. It was also notable, that despite the presence of the busy Fred Waring Drive on the eastern border you are only aware of the traffic on the two holes bordering the road. It feels like it’s just you and the golf course.

The celebrity course plays 7,000 yards from the tips at a 138 slope, but it was 6,300 from the whites at 127 slope. Some holes, particularly No. 9 are tough with the driver, but there are ample landing areas on most fairways. Carts are equipped with GPS. 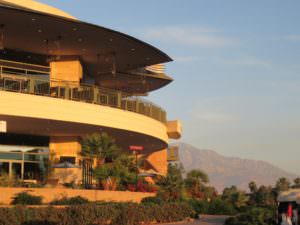 On a return visit, we took on the Players course that opened in 2007 and joined the Celebrity course on many lists of the best courses you can play in California. Designed by John Fought, his routing took advantage of the natural terrain to have elevation change on some holes—particularly No. 16 that takes the players back down to the Tahquitz Creek wash. The final two holes play across the wash on the clubhouse and hotel side of the property. The entire back nine of Celebrity plays on that side.

Most greens are guarded by deep and large bunkers. As with the Celebrity course, it was in impeccable condition.

The routing takes advantage of the majestic mountains that flank the Coachella Valley. Look up from many tees and the fairway and green will be framed by the San Jacinto, San Bernadino or Santa Rosa mountains with Mt. Eisenhower to the south.

Be sure to take advantage of the practice area because No. 1 is a 558-yard, par 5 that features fairway bunkers on both sides. You will want to be loose. 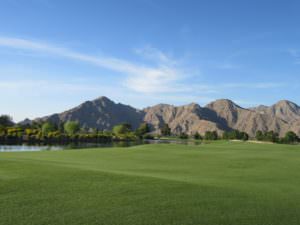 The par 4 16th and 18th holes sandwich the par 3 17th that plays 146 yards over water. The Santa Rosas frame this hole. No. 16, at 396 yards, plays sharply downhill to the green so a strong drive will result in a downhill lie for the approach shot to a green surrounded by four bunkers.

No. 18, at 491 yards, runs beside one of the resort hotels and a water feature that separates the lodging property from the fairway. The green is guarded by a waste area that must be carried to reach the putting surface.

The bottom line: the Players course complements the Celebrity course very well. Playing 36 here on a spring day would be a delight.

Superintendent Jonas Conlan and his team have been aggressively removing mature trees and over-grown landscaping from the rough that separates holes, particularly on the Celebrity course. The cleared areas are being landscaped with drought-resistant shrubs so there are great, fresh views of the San Jacinto and Santa Rosa mountains from the fairways. It’s a significant improvement for golfers who love to see the mountains instead of a tree-lined fairway corridor. Designers of both courses have many holes set so the mountains frame the target from the tees.

On a return visit in late November 2019, the fairways on both courses were in excellent shape. One had just re-opened to cart traffic a couple of days earlier after the fall over-seed grew in. The greens were rolling well and the overall experience was excellent. The first rain of the season had arrived the day before so we were able to enjoy views of snow on the San Jacinto and San Bernadino mountains. It’s such a striking contrast to be playing in shorts and bright sunshine and then look up at snow-capped peaks. 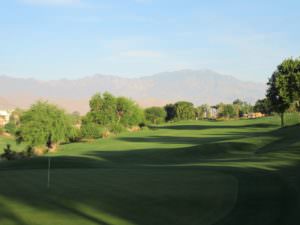 In addition to the GPS-equipped carts, Indian Wells offers Golfboards ($35 per round). Indian Wells is the only course in the Coachella Valley offering the Golfboards.  Tahquitz Creek, the Palm Springs municipal course, had four boards in 2016.