Mix together an under-utilized putting course and two entrepreneurial minds and what can emerge: Shots in the Night at the Indian Wells Golf Resort.

Indian Wells General Manager Steve Rosen had a putting course that wasn’t used much and he was interested in developing activities that non-golfers would find interesting. The resort’s two 18-hole golf courses share the property with three resort hotels with another across Highway 111, an easy walk away. The lodging properties do a robust meeting and convention business and the resort wanted to cater to golfers and non-golfers alike.

Rosen visited Dave Shultz at his Nextlinks studio where he’s combining a simulator with actual putting greens. He’s patented his approach. Shultz was looking for a partner so they could do a beta test of his putting green concept so Shots in the Night was born for the 2018=19 winter season.

There are two aspects—over-size blowup targets for the driving range (Glow Golf Range) and then fully electronic games for the putting green, The Putting Experience powered by Nextlinks. Golfers will be surprised that there’s no yardage markers for the driving range—a deliberate decision to make it friendly to the non-players. When hit, the targets flash and make sounds.

The putting green and the sides of the nearby wash are illuminated with lasers and bands of light that make for a festive atmosphere after dark.

We were offered a choice of nine different putting games. There was an electronic scorecard to keep score. We each had three colored balls plus the putter of our choice. After playing one game, most of us adjourned to the food and beverages at a nearby fire pit surrounded on three sides by a couch. The seating areas are new for 2019-20 and based on the observation of the operation in its first year.

Each putting green/seating area rents for $45 for an hour and can accommodate up to 12 players. It’s open Thursday through Sunday nights starting 30 minutes after the sun goes down behind the Santa Rosa Mountains. 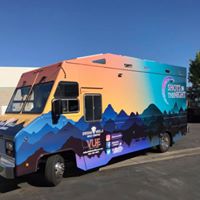 The food truck was a win-win for the resort. After remodeling the VUE Grille and Bar on the second floor to open up views of the golfer course, they did the same thing on the first floor, removing the indoor food service area. The food truck is parked during the day right outside of the clubhouse and then moves down to the putting green for Shots in the Night. There are plenty of tasty food options plus a full range of beverages, both day and night.

From the resort’s standpoint, it cost just about one-quarter of what building a stand-alone snack shack to serve golfers at the turn or before the round.

Views were what Troon managers were after at the VUE restaurant and clubhouse facility as well. Although it was designed to have great views both east over the golf courses and west toward the Santa Rosas, bars got in the way. The main bar sat only eight patrons and the work station blocked the golf course views. The redesigned bar has three work stations, seats 32 inside and another 8-10 on the patio outside with windows that raise up for easy service. 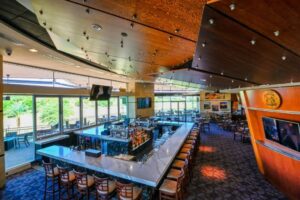 The did a similar remodel downstairs, removing the former snack bar that again obstructed views in favor of an open lobby area that can be set with tables and chairs and used for special events such as a buffet breakfast on the day we played.

The restaurant boasts more than 325 bourbons and whiskies. The dinner menu pairs several with specific dishes and offers an old fashioned or Manhattan made with a bourbon such as Woodford Reserve, Whistle Pig Rye or Buffalo Trace for $7. A pour of 10-year-old Pappy Van Winkle is $25 when ordered with “The Beast,” a 28-ounce, bone-in ribeye steak.

Michael Tebbetts, director marketing, pointed out the win-win that it’s a cool solution for the millennials who know you can get quality food off a food truck (No kidding—in the Bay Area, Sam’s Chowder House serves lobster rolls from its truck and other well-known restauranteurs have gotten in to the act).

Shots in the Night proved so popular in its first year that it returned $100k to the resort’s bottom line and provided that alternative activity. Rosen said 80 percent of the participants were non-golfers. They had originally plan to limit play to hotel guests, but the Indian Wells City Council, that had to approve the plans at the city-owned facility, insisted on public play.

During our late November stay, we played both the Celebrity and the Players courses. Both were in excellent condition with the fairways grown in well with the winter overseed.

We enjoyed our stay at the Hyatt Regency Indian Wells Resort and Spa. The well-equipped room had a comfy king bed plus a couch that opened up into a queen-sized bed. The bathroom featured a separate shower as well as a soaking bed. A coffee pot and small fridge plus an enormous flat screen TV complemented the other offerings.

As for Nextlinks, Shultz left a 20-year career at GE to launch the company, convinced he had a way to grow the game by appealing to non-golfers. With the success of the Indian Wells beta site, he’s moving ahead with a 16-bay indoor/outdoor complex in Scottsdale.