NextLinks founder Dave Shultz spent his professional career as a product development engineer. He loved golf, but that was his avocation.

It all changed about five years ago when he saw major changes coming in the industry. TopGolf with its food, bar and fun targets made it indoor/outdoor and attracted non-golfers. Simulators were getting better and better.

He thought, what if he could marry golf on a simulator with a real putting experience? So, after 20 years as an employee and 30 years of marriage, he rolled the dice and became a golf technology entrepreneur.

He shared his idea with a wealthy life-long friend from his buddy golf trips. After nine months, that person agreed to bankroll him—slowly—essentially one check at a time (it’s been 40 checks and about $3 1/2 million) over 4 ½ years.  A few times over the last several years, it was getting to the point of closing down and then the investor wrote another check.

Shultz finished and patented his design for simulator golf with real putting/chipping experiences, but still need to prove the concept and get it to market. He was running out of time and money.

That’s where Steve Rosen, general manager of the Indian Wells Golf Resort, came in. They had a couple of conversations over a period of months and then Rosen and Michael Tebbetts, the marketing manager, got serious and visited the NextLinks headquarters.

They were looking for a non-traditional golf game to attract non-golfers from the resort hotels on their property and had an under-utilized putting course. Dave and his team had devised lasers and used them for games such as corn hole, golf darts and shuffleboard that could be played on the putting greens. 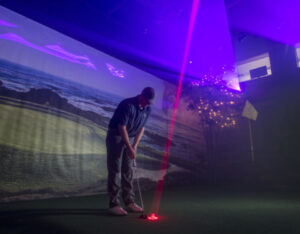 Recalling their conversations, he said it was less about the putting and more about the lasers and the lights and the special effects they’d created in their lab. That sold the Indian Wells team because it was a great environment with the music and lights.

In 2018 Shots in the Night debuted at the resort during its winter season—opening Thursday through Sunday after dark. It was a huge success with 80 percent of the participants being non-golfers. Putting is the least challenging aspect of golf with the quickest learning curve.

The putting experience, enhanced by laser light displays on the hillside across the wash at Indian Wells, is complemented by big targets on the driving range that light up and make noise when they are hit by a ball. The experience got even better in 2019 when NextLinks added the scoreboard for team competition and Indian Wells added sitting areas and fire pits next to the greens.

With proof of concept and the successful Beta test, Dave was ready to move to the next phase—a larger, non-golf course-based facility. That’s under development in Scottsdale with 355,000 people living within five miles of the facility, including students at Arizona State University. It’s scheduled to open in the first quarter of 2020.

They’re manufacturing the greens (both the putting surface and the shaping materials underneath) for the 16-green facility. They’ve partnered with a food and beverage company so there will be five restaurants on site with the golf experience the drawing card. They will share revenue with the food-and-beverage operators and, with that potential cash flow, they’ve been able to lineup real estate investors who understand that potential. It’s the path to sustainability and profitability so Shultz said he now knows they will make it as a company. The food-and-beverage partner, with a successful track record in the area, was able to land a 10-year lease with two five-year options. 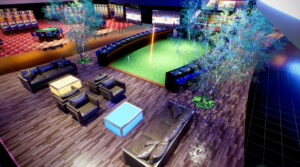 They hope to get two more sites going early in 2020. Shultz remarked that when he started the only competition in the non-golf course market was TopGolf. Now there’s five others in the same space—his key difference is he’s going for the putting green while the other competitors are focused on the driving range. He’s betting his will be a better attraction to grow the game off the course.

“You are really in a renaissance development (from a technology standpoint) and golf has been slow to embrace anything outside of the traditional game,” he said while enjoying food and a cocktail in the seating area next to the green. That’s a key part of the concept—it’s a pleasant place to gather, chat, eat-and-drink and play a relaxing putting game.

In 2019, they refined the technology so now the one light can show the pattern for the game, while others can spotlight where to place your ball. They’ve mapped every square foot of the greens so they’re now developing new games to take advantage of that mapping.

They have three commercial offerings that all come with the electronic bells and whistles:

NextLinks is marketing the putting green complete with its eight games to owners of luxury homes. They start at 400 square feet and can grow to almost any size. They’re also building a data base so people can gamble on any of the electronic games or gamble on putts against “the house” based upon the distance from the pin.