When veteran chef Matt Greco set out to create his own restaurant in downtown Pleasanton, he had clear objectives in mind. 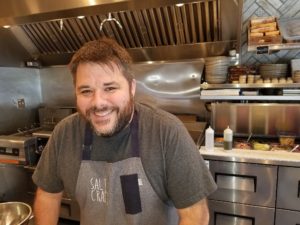 He opened Salt Craft, located at the corner of Saint Mary St. and Peters Avenue one block off Main Street in downtown Pleasanton. His is a unique restaurant with a different approach in the city he and his wife have lived in since he came west to join the Restaurant at Wente Vineyards as its executive chef.

Matt and his team transformed a 1930-era bungalow into a kitchen with two restrooms. All the seating is outdoors, either on the patio under umbrellas or under two armor-plated awnings (8×8 posts with 4×6 beams) that have roll-up shades to block the sun or provide more of an enclosure with plastic sides come the winter months. Heaters also make it cozy when the weather is cool.

Because he likes breakfast, the restaurant is open from 8 a.m. (9 a.m. on weekends) to 9 p.m. serving three meals and blending them seamlessly. If a patron wants a breakfast item at 11:30 during the lunch serving, no problem. His team is settling into its routine after a challenging opening in April. 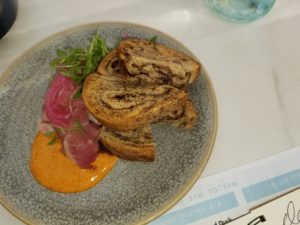 Plenty of people knew Greco’s reputation and skills from his Wente time so they were just slammed during the opening. Matt, who had opened two highly anticipated restaurants during his 10 years in New York City, was unable to control demand so they struggled to serve 350 meals in those early days. They suspended breakfast and lunch to focus on working out the kinks with just the dinner service. That didn’t stop some folks from shouting on social media, but that has passed. 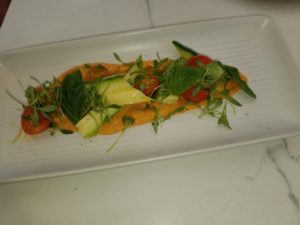 Salt Craft now has moved back to three meals. His goals are to grow breakfast and increase the early and late diners at dinner time.

When it comes meeting his objectives, he’s right on. Casual is epitomized in the shorts and t-shirts his crew (including the boss) wear with a full-length restaurant apron.  Patrons are dressed casually as well.

When it comes to the food, wow. His baker starts early in the morning to create Levain (sour-dough French bread), a sensational rye that is started using the left-over coffee from the day before; and a sunflower seed bread. 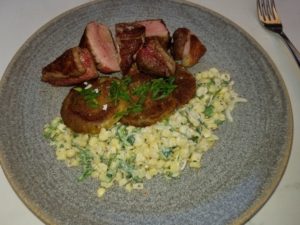 Summer corn from Brentwood, as you would expect in July, was featured in several dishes.

Salt Craft offers a limited wine and beer list (all Livermore Valley) with beers set at $8 and wines ranging from $7 (Nottingham sparkling white) to rose (Retzlaff $12) to two Chardonnays ($13, Wente Riva Ranch and Nottingham Cellars) to $13 for a variety of reds ranging from Wente Riva Ranch Pinot Noir to Las Positas Tempranillo, to Las Positas Barbera, Murietta’s Well The Spur and Steven Kent Cabernet Sauvignon. Wines, with two exceptions, are $50 for a bottle. He will rotate the list by the season to pair with the food. 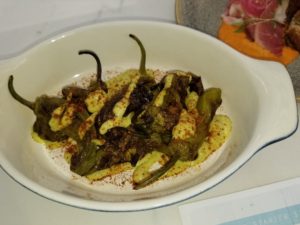 The menu also lists the purveyors, most within easy driving distance ranging from Sunol to Livermore to Brentwood, although the polenta comes from South Carolina, the pork and butter beans come from Chico, the lamb from Dixon and the stone fruits from Reedley.

We asked Matt to select a menu that showed off the best of Salt Craft. The name comes from his consulting company that he’s been operating for a few years. After leaving Wente to put Salt Craft together, he worked for 18 months running a cafeteria for a technology firm so he’s seen food service from many angles.

We started with Tandoori Spiced Corn on toast that made both the bread and the corn shine. My favorite, loving good rye bread, was the lamb pastrami on rye with pickled onions and secret sauce. I had my eye on this since previewing the menu and it lived up to expectations. Matt’s team uses either a lamb leg or shoulder (it’s been both in the last four months) and then cures the pastrami for a week.

His next recommendation was roasted Shishito peppers with green tomato avocado sauce and chilled marinated summer squash with gypsy pepper almond romesco, tomato and herbs. Both were excellent.

We enjoyed the Wente Riva Ranch Chardonnay and an Albarino Ragbag WineWorks from Steven Kent with the starters. Both paired well and the Albarino, a crisp white wine that is mainly grown in Spain and Portugal, is particularly versatile 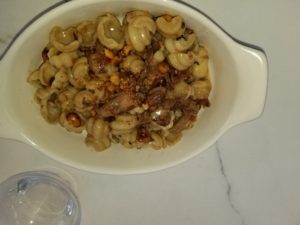 Greco’s menu is focused on using smaller proteins so chicken and duck are regularly featured, but they also work with half of a hog. Our Lumache house-made pasta featured Cabernet-braised duck with hazelnuts, sage and Fontina cheese. We split a portion and still worked to finish it—you would have to be really hungry to finish the regular portion or go very light on the starters and bread. These were paired with the Steven Kent Cabernet.

For dinner, we enjoyed the roasted duck breast—again an ample portion—with the fried green tomatoes (something new for us) and the corn remoulade. The flavors complemented well and were paired with the Riva Ranch Pinot Noir. Tasting both, we recommend the Cab. 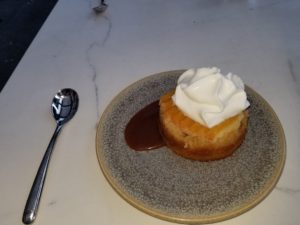 We finished up with Peach Upside-Down Cake served with salted caramel and whipped cream. What a treat—perfect comfort food. The other offerings were a chocolate panna cotta, a berry and nectarine cobbler and honey caramel graham cookies (baked in-house).

We dropped by Salt Craft for a Christmas season mid-morning breakfast after picking up our daughter and her dog at the airport. It was an easy choice once we saw that it was dog friendly. It was all of that—the server brought a bowl of water for Norma and added a homemade treat that she wolfed down. 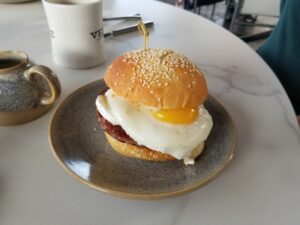 The menu offers five breakfast toasts ($7), three egg scrambles ($13), five entrees ($16), three breakfast sandwiches ($12) as well as Verve coffee, juices and sodas and three wine cocktails. It was a hard choice for each of us because there were many good choices, among them the maple bacon and caramelized onion scramble and the bread pudding French toast.

My bride opted for the breakfast sandwich featuring homemade fennel sausage and brie topped with a sunnyside up egg and dressed with tomato jam. It was so large she didn’t dream of picking it up and used a knife and fork. The same went for my daughter who opted for the breakfast mushroom melt. It reprised the brie from my wife’s sandwich plus caramelized onions and a variety of mushrooms again topped with an egg. 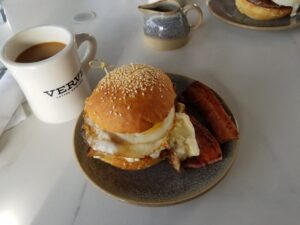 Mushroom melt with maple bacon side

Her highlight was the side order of the maple bacon that was slice about one-quarter inch thick—easily the thickest slices of bacon that I’ve seen in a restaurant. The kitchen team, my wife reported, cut each slice off the cured slab.

I opted for the turkey, pork, kale sausage with two sunnyside up eggs, spiced potatoes and levain (sourdough French bread). The sausage hit the spot as did the potatoes—just enough spice without going over the top.

The highlight, surprisingly, was when our server volunteered to bring me some jam for the toast. It was homemade (as is everything at Salt Craft) cranberry that had been cooked down with spices and then sweetened with maple syrup. Wow. After tastes all around the table, we took home a pint. 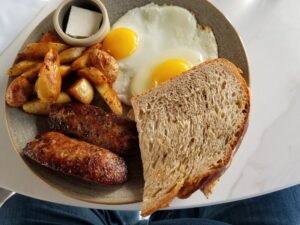 The breakfast bottom line: you can find a less expensive breakfast elsewhere in Pleasanton, but you will be hard pressed to find anything that comes close to the homemade quality of Salt Craft.