Stand on the corner of Main Street and Angela in downtown Pleasanton and three quality Italian restaurants are just a stone’s throw away.

Pastas Trattoria has more than a 25-year history in downtown, while Chianti Riserva has been open for more than seven years across the street. The newcomer is Locanda Amalfi, which took over a vacant space that previously housed an Italian restaurant. A few blocks up Main Street is Strizzi’s that celebrated its 30th anniversary in 2019. 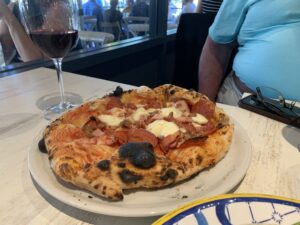 Locanda is part of a group of Italian restaurants featuring Neapolitan pizza, pastas and small bites that started in Lafayette. The Pleasanton store features an open kitchen and full bar with seating inside, outside and on the street in a tent. When we ate there in June, we opted for the air conditioned inside table—in December, despite heaters outside, we had no interest in anything but an inside table.

There are hard surfaces everywhere so having a quiet conversation is a major challenge—it’s noisy. If you want a quiet date night chat, this is not the ideal location—unless you opt for an outside seat.

The food stands out—whether the thin crust pizza as a starter or appetizer, the lightly breaded calamari or the special, a fried zucchini blossom appetizer. The pizza menu includes four that were created more than 100 years ago as well as seven other favorites. We split the meat lover’s pizza as an appetizer on our first visit when we celebrated my daughter’s birthday. 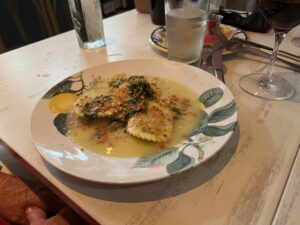 This time around, we were celebrating a landmark birthday for my bride. We started with craft cocktails—a pineapple mojito was a favorite, as was the A-malfy, an herbaceous gin concoction featuring Malfy gin from Italy. The aforementioned zucchini flowers, stuffed with mozzarella and served with a truly divine marinara, were a standout as was the version of lightly battered and fried calamari and shrimp (misto fritto) that we savored on both visits. The aioli served with the misto fritto was sensational-we asked for a second serving and spooned it out with the remnants of the bread bowl. The appetizer portions are large enough that they can be split two or three ways.

My ladies ordered the roasted Brussel sprouts caramelized with bacon and drizzled with balsamic vinegar. They enjoyed it and some of the plate came home for lunch the next day.

My daughter could not resist ordering the gnocchi with white truffles for the second time (featured photo)—perfectly prepared potato dumplings and a sensational sauce. My bride decided on the homemade ravioli special that was stuffed with wild mushrooms. Another hit. 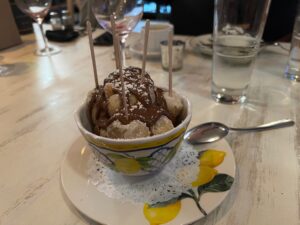 I opted for the strozzapretti that included Italian sausage, spring peas, wild mushrooms in a Parmigiano-Reggiano cream sauce. Another great choice.

We celebrated the birthday with tiramisu, a ricotta cheesecake with a pistachio-covered crust and mini donuts (zeppolini) with Nutella sauce. My daughter loved the mini-doughnuts, while I enjoyed one of the creamier and most delicious renditions of tiramisu. The staff enthusiastically joined in singing Happy Birthday, but we paid for all three desserts. We also brought a bottle of Italian wine from home and paid $25 corkage.

The menu includes just five second courses—lamb, chicken, eggplant, sea bass and veal, but there’s plenty of options on the menu with the starters, pasta and pizza that range in price from $17 to $23. 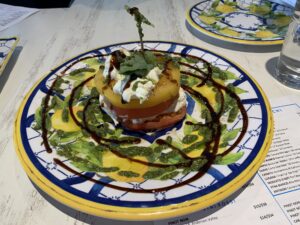 The menu changes seasonally—pizzas and pasta are consistent, but the specials change. During the June visit, we enjoyed an unusual rendition of a Caprese salad with large heirloom tomato slices forming a sandwich with burrata cheese topped by a drizzle of Balsamic vinegar and basil leaves.