Terra Lago  boasts two 18-hole tracks on the far eastern site of the valley in Indio that are routed in the desert foothills. The only green you will see is cultivated grass—the rest is desert shrubs or bare dirt. The views often go toward the rugged, brown eastern mountains, opposite the San Jacintos and Santa Rosas that characterize most Coachella Valley courses.

The north course hosted the Skins Game from 1999-2002 with both nines finishing on greens surrounded by water right in front of the clubhouse.

We played the south course which was in uneven condition in early 2013 (bare patches on some fairways) although the greens rolled true.

A branch of the Coachella Valley canal comes into play on three holes on the front nine.

Like most of the courses located east of I-10, this is best played in the morning before the afternoon breezes come up. 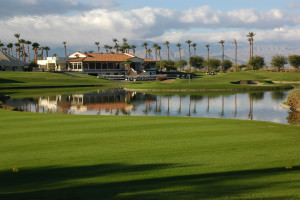 The clubhouse at Terra Lago