Bay Area amateur golfers Yealimi Noh of Concord and Lucy Li of Redwood Shores have both been named to the Rolex Junior All-America team.

The two golfers were among the 20 male and female golfers named to the first team All America squad based upon their play this year in American Junior Golf Association tournaments.

Noh, 17, was named Girls’ Player of the Year after winning five times nationally, including the US. Girls Junior, Girls Junior PGA and the Canadian Women’s Amateur back-to-back-to-back. She is planning to turn pro this year or early next year after withdrawing from an early scholarship commitment to UCLA. Earlier this month, she made the cut and finished 59th in the LPGA KEB Hana Bank Championships in South Korea. She also played as an amateur in the Canadian Pacific Women’s Open, earning her spot by winning the Canadian Amateur. She was the low amateur, finishing 46th overall.

She plays out of the Oakhurst Country Club in Clayton and practices twice a week at Corica Park where her teacher Erik Stone instructs his pupils. 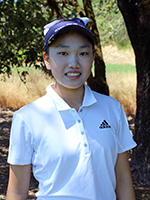 She qualified again for the U.S. Open last summer as a 15-year-old when it was staged at Shoal Creek in Alabama. She earned a sponsors’ exemption into the LPGA’s first major, the ANA Inspiration at Mission Hills in Rancho Mirage. She shot 70-76 and missed the cut.

Ty Akabane, 17, of Danville was named honorable mention. The highlight of her year came when she won the California Women’s Amateur at Quail Lodge in Carmel.