The Pebble Beach Co. and Tiger Woods have scored a hole-in-one on The Hay and Hay’s place.

The short nine-hole course designed by Woods replaced the former course named for long-time Pebble Beach and Del Monte pro Scotsman Peter Hay who built the first short course that the current one replaced. He was committed to junior golf and established the first youth tournament on the Monterey Peninsula. You can read more about Hay https://www.pebblebeach.com/golf/the-hay/

Woods had sloping land to work with so there’s plenty of elevation change on the hillside course. The view of Carmel Bay around to Point Lobos from the first and eighth tees is simply spectacular on a clear day. We happened to catch one of those in late October—75 degrees with a breeze in late October. The patio surrounding Hay’s Place, which opened in late September, boasts the same views.

In contrast to the other Pebble Beach resort sites, there’s a relaxed vibe around both the short course and the Tex-Mex themed restaurant. You check-in across the street at the Pebble Beach Golf Academy and then stroll over to a starter located next to the immense 20,000-square-foot putting green.

9th hole at The Hay

The green, which had a nine-hole putting course laid out when we played, can accommodate a full 18-hole putting course. It covers 100 yards end-to-end and is free to use—you might even be able to talk the starter out of a loaner putter. I suspect it will be quite popular with families who want to introduce children to the game. The flexibility extends to the golf course—dogs on leashes are welcome as are spectators as long as they observe golf etiquette. As long as you maintain pace of play, groups of up to eight can go out together (they have to reserve back-to-back tee times).

That’s truly a relaxed, newcomer-friendly approach, one that the course matches. Green fees are $65 with juniors 12 and under playing for free. There is no formal dress code.

The course totals only 670 yards with a single set of tees off springy mats. The longest hole plays about 100 yards and is the tribute to Pebble’s famed ocean-side par 3 No. 7, while most of the others are 50-70 yards. With the exception of No. 2 where a trap fronts the green, there’s ample room to roll the ball onto the other greens—other sand traps are placed beside the greens.

I played with a putter and a wedge, while my bride took two clubs plus her putter. As a two-some with the course jammed in front of us, we ended up waiting on several holes, but it was not a big deal. We could simply roll a few more putts because there was a foursome behind us so we didn’t move to the next tee until the green had cleared. Since opening in April, the course has been full almost every day. 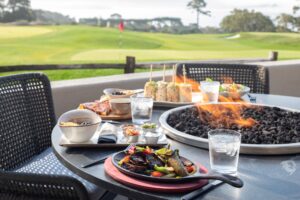 Elevation change is a key design feature. No. 1 is a bit downhill, while No. 2 is sharply downhill—just like No. 7 at Pebble. Other holes play uphill as you climb back up to the restaurant. Each hole has a brass plaque that includes its name and why that person has the hole named for them. That includes famed pros such as Jack Nicklaus and Tom Watson as well as the originator of the Crosby Clambake (now the AT&T National Pro-am), Bing Crosby.

In keeping with the relaxed vibe, the greens have some challenge, particularly uphill and downhill, but roll true and are slower than the greens on the regulation courses. Tiger mixed in a Biarritz-style gully on No. 1 as well as plenty of contour on his signature 9th hole. It took just over an hour to play nine and then it was time for Hay’s Place.

Given the wonderful day, we opted for the patio and the Carmel Bay view. The designers set up the patio so it is functional on foggy days with gas heaters mounted on the building and fire pits at a few tables. The menu ranges from appetizers to soups and salads as well as tacos and “non-tacos) plus full plates. 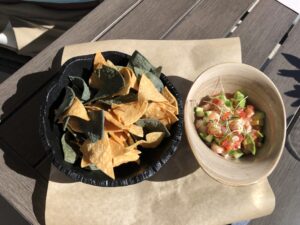 Ceviche with shrimp and sea bass

We started with Ceviche that included shrimp and the catch of the day—sea bass—a favorite of mine. The mix included citrus, tomato, chili and cucumbers and was a refreshing and light way to start the meal. My bride opted for the grilled shrimp, which we split. Two skewers of jumbo 13-15 count shrimp (an entrée portion in most restaurants) were grilled and topped with citrus butter and herbs. Add a salad and it would have made a full meal with the shrimp. 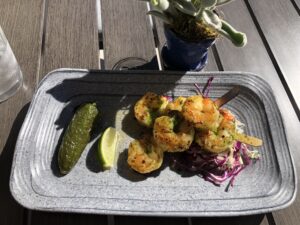 The food and beverage folks had fun with the menu. We saw at least two tables enjoying the Tin Can Nachos. The nachos are layered with blue corn chips, queso blanco, roasted jalapeno, black beans, pico de gallo, sour cream and guacamole—all contained in a big No. 10 can. The server slips off the can and voila, enjoy.

Given the Mexican theme, I opted for enchiladas, a trio—one stuffed with lobster, one with shrimp and one with the catch of the day, sea bass. A different sauce complemented each one and it included black beans and rice. This would have easily sufficed by itself. 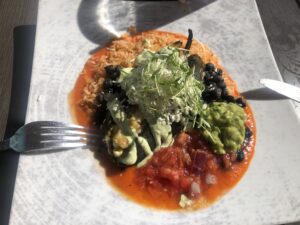 My bride chose another signature dish, a Chile Poblano stuffed with—catch this—sweet potato, grilled corn, black beans, tomato, Monterey jack cheese, with a chile relleno sauce, a spicy crema and guacamole. She loved it and was planning to plant Poblano peppers in her garden next spring so she could replicate it at home.

The Hay offers cocktails as well as a limited wine by the glass list and plenty of options for craft beers, Mexican beers and light beers by Budweiser and Coors.

We decided on the Ay Que Bueno (rum, lime, blackberry, simple syrup, soda water and mint). Our server accurately described it as refreshing. I tried the Hay Mary. We would not order either one again. What we should have done is stay Mexican with the signature margarita. It was wonderful and will top the order list when we return. 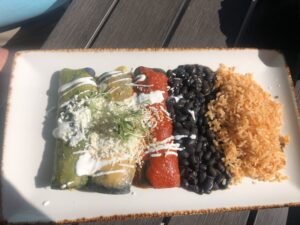 I could not finish my beans and rice (they went home for a late dinner), so we took dessert home. There were three choices: Mexican spiced chocolate cake, Tres Leches cake and carmel flan. We selected the latter two and enjoyed both, but the flan was the favorite.

The perfect day, the course and the lunch made it a memorable time that we would recommend.