When headed from the Bay Area to the Monterey Peninsula for golfing, consider playing a round at the San Juan Oaks Golf Club in Hollister.

It’s about 70 miles from the heart of the East Bay (two-thirds of the way to Monterey Bay) and a little more than a 30-minute drive without traffic when headed back from Monterey. You will not be disappointed.

It’s a Fred Couples signature design that opened in 1996 and currently there are no homes on the 2,000-acre parcel that the course runs through. Couples and his partner, Gene Bates, took full advantage of the natural terrain much like Greg Norman did at the Course at Wente Vineyards. They preserved valley oak trees that are hundreds of years old and the occasional sycamore, while planting plenty of live oaks to frame the fairways on holes in the valley. 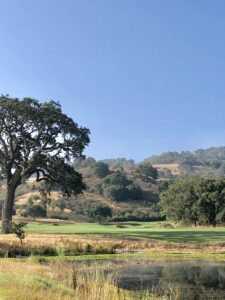 When we played on a late October day, the greens had been punched the week before, but they were still rolling well. For the most part, the greens are huge with plenty of slope and undulations. When putting in normal conditions, they will add to the challenge. Most of the holes offer generous landing areas, particularly on the front side.

It was not a very busy day so what was striking was how quiet it was on the golf course once we moved away from the clubhouse. We could see Highway 156 in the distance on some holes but could not hear the vehicles.

Wildlife abounded—more flocks of turkeys than we can count plus deer and evidence of wild pigs (they tear up fairways rooting for grubs—a common problem at courses located near open space (Wente and the Blackhawk Country Club near Danville have the same issue). There were plenty of birds, ranging from ducks and egrets to a hawk harassing a starling.

One treat was seeing a herd of genuine longhorn cattle clustered against the golf course fence.

The front nine runs out through the valley with the designers making sure that plenty of bunkers surround most greens and as well as the fairways. Water is in play on five holes on the front side.

The course gets really interesting on the backside when the par 5 No. 11 turns up into a valley flanked by ridges on both sides. The uphill par 3 #12 follows and then there’s the chute that measures 464 yards from the tips. You can see the landing area that’s not particularly large and then the approach shot is over a seasonal creek. It’s the No. 1 handicap on the golf course.

No. 13 brings that creek into play again as it bisects the split fairway.

The designers took full advantage of the terrain by routing the next several holes through along another ravine with plenty of elevation changes before you get to No. 18.

There is a huge grass driving range plus a practice area with a bunker and the expected putting green.

The clubhouse has both a restaurant and full bar as well as meeting rooms. The club markets itself as a wedding and event venue. 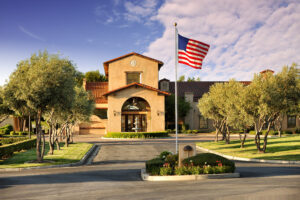 San Juan Oaks is owned by a local businessman Ken Gimelli. He has approval to build 1,000 senior homes, a 200-room hotel and a commercial shopping center, but has yet to find the right developer, according to General Manager Manny Freitas. The bulk of the development will be to the west of the golf course (the entrance road to the golf course runs for several miles off of Union Road so there’s plenty of room there). Homes are only planned for the 10th and 11th holes so the majority of the course will remain the way it is today.