On 49er game days, he throws amazing parties for exclusive Michael Mina’s Tailgate members. The Bourbon Pub and Tailgate area opens four hours before kickoff for a five-course feast that is themed to that day’s opponent. The tailgate complements the daily offerings at the Bourbon Pub and the adjacent Bourbon Steak fine dining restaurant.

In 2016, Mina introduced the idea of pairing guest chefs with each game. For the Green Bay game, he paired Jeremy McMillian from his Bourbon Steak Scottsdale restaurant with Josh Smith of Bardot Brasserie. Smith prepared his Black & White Macaroni Gratinee with a parmesan and black truffle béchamel. 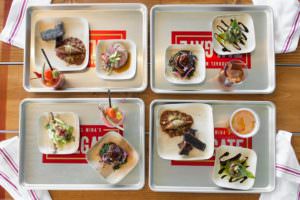 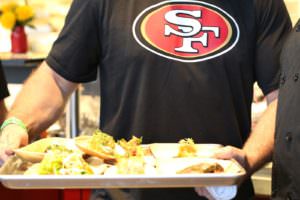 Each menu includes a shellfish station, cheese and charcuterie plus vegetables, salads and pastries.

The kitchen was equipped so the induction (magnetic) cook top can handle pots large enough to cook 200 lobsters. Cooking mac-and-cheese as a side dish for a party of six fills a tiny portion of the cooking surface.

And then there are the wood-fired cookers. The wood-fired oven for cooking steaks can be heated up to 900 degrees so the restaurant’s wide variety of premium steaks can be perfectly prepared. To prepare the steaks, they are heated slowly in butter in warming trays so the temperature is uniform before they go into the 900-degree oven. Of course, the butter bath enhances the steaks and is used throughout Mina’s steakhouses.

The only exception is the amazingly marbled Kobe steaks from Japan that would render their fat if warmed in butter.

Notably, the large induction stovetop and the wood-fired oven are the minor parts of the game day equipment. 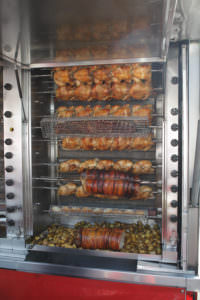 There’s the two-story, wood-fired rotisserie that rotates and includes cages for chickens and other meats. These also rotate so everything is constantly being basted and basting other baskets. It can be accessed from both sides so it’s efficient both in the kitchen on the upper level and in the serving area on the lower level with the picnic benches where there’s a second serving line and lots of custom picnic tables for the tailgaters.

And then, there’s the centerpiece—the wood-fired barbecue that can cook an entire side of beef at 700 or more pounds. A side of beef, which is provided by George Lucas’ Skywalker Ranch in Marin County (American Wagu Beef), is prepared for each game.

A crane, bulkier than what a mechanic would use to lift an engine out of a car, is used to hoist the meat in and out of the barbeque. Loading the barbeque is a challenge, but it’s a particularly difficult to maneuver the cooked meat out when it’s finished.

Cooking with wood, they start at 275 degrees and maintain that temperature until the meat is done and then crank up the heat to 475 degrees to finish the outside. It takes about 14 hours to cook a side of beef. During the week, they prepare 200-pound whole hogs that are butterflied so they are flat and relatively uniform in depth. They take about seven hours to barbecue.

Starting with huge chunks of beef allow the culinary team to serve amazing cuts of meat. Typically, chefs prepare a “Tomahawk steak” (a rib-in cut that includes much of the rib as well as the prime rib or rib eye) using the smaller ribs on a side of beef.

Incidentally, Chef Mina said that bourbon in the restaurant’s name (he now owns six Bourbon Steak locations around the country) has nothing to do with the popular whiskey. He named them for the Bourbon Stockyards in Chicago. Of course, the restaurant and pub offer more than 30 bourbons.

There also are two private dining rooms (seating 15-20) as well as the indoor/outdoor tailgate space that can accommodate 200 for a sit-down meal to 400 for a cocktail gathering.