When making plans to visit Healdsburg and the many wineries in the area, give yourself a treat and set up a private visit to Hafner Winery. 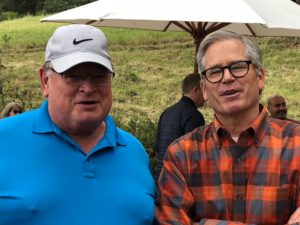 The winery, in the Alexander Valley, celebrated its 50th anniversary last year and is run by the sons, Parke and Scott Hafner, of winery founder Dick Hafner. Dick’s wife, Mary, passed away last year.

Berkeley residents when Dick was the public information office at Cal during the turbulent 1960s, they bought 250 acres including a fruit orchard in the Alexander Valley in 1967. Over time, the planted 100 acres of Chardonnay and Cabernet Sauvignon. Over the decades, they have broadened the classic offerings with a Next Red, a Bordeaux blend, and a Rose. The Next Red is mostly Malbec with a blend of some Petit Verdot and Cab.

What’s unusual about Hafner is they sell all their wine direct to consumers through the popular tasting program. The tasting program ($216 this year) delivers two bottles of each release (Chardonnay, Reserve Chardonnay, Cabernet Sauvignon and Next Red). Patrons are encouraged to taste the wines and then order. The only other distribution, about 1 percent of the 15,000 cases, is available in restaurants. Hafner sells about half of its grapes to other wineries.

Parke, the oldest son, attended UC Davis’s enology school and then worked two years at Napa Valley wineries. He went abroad to work in France and then returned in 1981 to prepare for the winery’s first crush in 1982. The premium Hafner wines are aged in oak longer than in many wineries. For instance, the current releases of Chardonnay in spring 2018 are both 2015 vintage, while the Cab and Next Red are 2013. Parke makes all the wines, even the whites, to age for a few additional years in the bottle.

When we attended the patrons’ event on Mother’s Day, the 2014 Chardonnay magnum was drinking very well.  The same goes for a 2006 Cab—we also had the opportunity to taste the 2000 Cab bottled in a magnum. 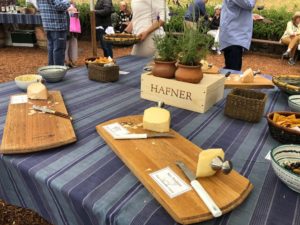 The patrons’ parties feature library releases as well as food and cheese pairings. There were three different Sonoma cheeses, almonds, olives and Parke’s hummus served in a delightful environment under Valley Oak trees. The chef prepared prosciutto-wrapped shrimp to die for as well as barbequed beef served on sour dough toast with a Romanesco sauce and Calendula blossoms.

Both paired nicely, as did the cheese (it was wonderful with the Chardonnays) with the four reds.

Since 1994, they have aged the wine in caves drilled into the hill behind the winery building. The caves allow for both constant temperature (63 degrees) as well as 85 percent humidity that limits evaporation through the oak barrels.

There is no tasting room on the property. Family members lead tours, by reservation only, on the first and third Fridays at 2 p.m. Contact the winery for reservations at (707) 433-4606 or email  ([email protected]). If the Friday schedule does not match your plans, contact Hafner to see if they can accommodate you. In a sharp contrast to most wineries, they are closed on

At the unanimous suggestion of four Hafner employees, plus their suggestions on their website, we dined at Willi’s on a busy Mother’s Day evening. The broad and eclectic menu featured fresh oysters as well as other raw shellfish plus lobster rolls, crab cakes, salads, chops and veggies. Everything is a small plate designed to share.

I had mentioned salads after our protein and cheese rich afternoon at Hafner, so one employee recommended the spinach salad. We skipped the raw shellfish and crudos and opted for four shared plates: the spinach salad, the lobster roll, the crab cake and the calamari (both recommendations). 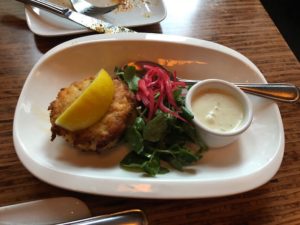 The opposite was true on the crab cake. As advertised, no filler, and full of delicious crab complemented by an aioli. If you like crab cakes, order one.

The same could be said for Willi’s very different take on fresh calamari. It was lightly breaded, and flash fried—leaving a bit of crunch and very tender meat. It was dressed in an orange, chili gremolata that had a bit of a kick.

The same could be said for the thick hunks of bacon in the spinach salad—a bit of bite. 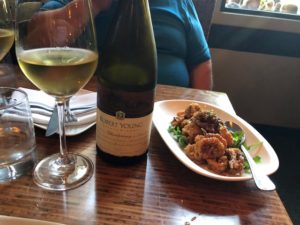 The wine, despite the different seasonings in the four dishes, complemented them beautifully.

Willi’s is not the spot for an inexpensive evening—the chardonnay was $15.25 per glass or $69 per bottle and the small plates were $10.50 to $16. That said, the food, particularly the crab cakes and the calamari were excellent and high quality. Service was prompt—on a busy night we were in-and-out in a little over an hour, well satisfied.