Dutcher Crossings is located on Dry Creek Road across the valley from the Bella Winery and Caves that is located on the westside. 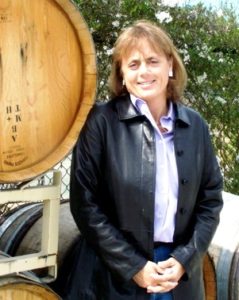 We sat down with Debra and Winemaker Nick Briggs to sample several of their wines. The winery dog, Debra’s Golden Lab Dutchess, laid nearby in the sun as we sat at a picnic table on the winery patio. Nick said they make between 10,000 and 12,000 cases a year in small lots. He makes up to 30 different wines: four to five Chardonnays, three to four Pinot Noirs and eight Zinfandels.

Debra said she fell in love with the wine industry when she went to France on a summer tour while in high school. That was followed by many other trips. The daughter of a business man, she was trained as an educator, but always wanted to be in the wine business.

With her father terminally ill with cancer, they sat down together and decided she should pursue her dream. Dutcher Creek has been founded in businessmen in 2001 and she made them an offer and bought the winery in 2007. The high-wheeled bicycle on the label was a gift from her dad and, yes, she can ride it. She is avid cyclist.

The winery takes its name from Dutcher Creek that runs across the property and flows into Dry Creek. After her purchase, Debra reversed the direction of the winery and greatly expanded the number of wines from the eight that were made when she purchased the winery. The website lists 12 varieties of wine and she said the probably have 30 different wines.

We started with the newly released 2017 Sauvignon Blanc ($30) that was followed by the 2016 Winemaker’s Cellar Chardonnay ($36). Both are crisp and fruity because they were made in stainless steel. The Chardonnay won a double gold at the Sonoma Country Harvest Fair in 2017.

Her approach is for the winemaker to source fruit from exceptional vineyards throughout Sonoma and Napa counties. Debra and Nick are growing the winery’s Pinot Noir offering based upon finding the right fruit. One Pinot, the 2014 CFM 121 Tribute, is made in memory of Debra’s father, Charles Mathy. The label, made of wood, pays tribute to his love of cribbage.

Another Pinot Noir (2016) was made with fruit from the Terra De Promissio Vineyard—Nick made 358 cases. The vineyard in located in southern Sonoma County in the Petaluma Gap so the climate is much cooler than at the winery near the end of the Dry Creek Valley. There still the fog effect so Nick said they can see 40 and 50 degrees swings in the temperature over 24 hours. 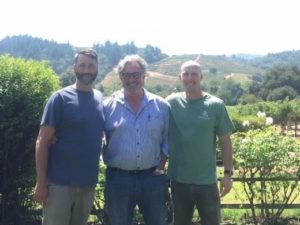 We also tasted the 2015 Proprietor’s Reserve Zin ($32) that was drinking very well. Dutcher makes many single-vineyard wines, but Nick emphasized that he doesn’t hesitate to blend if it will improve the wine. He blended Petite Sirah into this Zin and routinely blends it into his Zinfandels.

We moved on to 2015 Bacigalupi Vineyard Zin ($36) that is in the Russian River Valley, so the weather is cooler than on the estate winery. This wine was aged in French oak.

The 2014 Family Reserve Merlot ($50) was made with fruit from Atlas Peak in the Napa Valley. Only 192 cases were made.

We finished with the 2013 Cooney Vineyard Cabernet Sauvignon from the Alexander Valley. It has won two gold medals and is very drinkable.

What’s great about Dutcher, like other smaller Sonoma Valley wineries, is you are likely to meet either the owner or the winemaker when you stop in to taste. We certainly enjoyed our conversation and the wines that Nick and Debra poured.

The winery grounds are ideal for a picnic with tables under the trellis on the patio.