Kathryn and Craig Hall have built a reputation for doing things right in the premium California wine business.

They purchased a historic winery property in St. Helena in 2003 and re-opened it as Hall Napa Valley. It’s built a remarkable record for extraordinary Cabernet Sauvignon, including some 100-point wines. They added a second property in Rutherford with both focusing on producing extraordinary Napa Valley wines.

The Halls decided the grow their brand, using Kathryn’s maiden name of Walt, to launch a brand focused on Chardonnay and Pinot Noir. 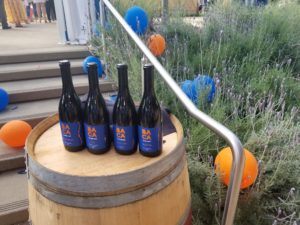 In contrast to the Napa Valley focus of Hall, Walt sources the best fruit over nearly 1,000 miles of coastal vineyards to make premium Pinot and Chardonnay. Vineyards growing fruit are located from the Santa Rita Hills in Santa Barbara County to Sonoma County, the Anderson Valley in Mendocino County to the Willamette Valley in Oregon.  The wines are produced at the Napa Valley facilities and there’s a tasting room on the Sonoma Square.

In May, with suitable fanfare at a private party in St. Helena, the Halls launched their third brand, BACA, which produces four Zinfandels. BACA means berry in Latin.

The vineyards range from Paso Robles to the Russian River Valley to Rockpile above Lake Sonoma to Howell Mountain in the Napa Valley. Both Howell Mountain and Rockpile vineyards are located well above the fog line so vines struggle for moisture and produce intense fruit. 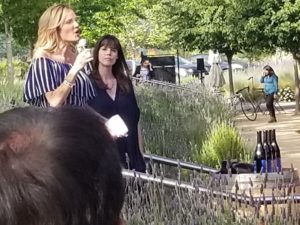 BACA Director Jennifer Brown, the Hall’s daughter, partners with Winemaker Alison Frichtl Hollister on the BACA brand. They’ve given each of the Zins a playful name.

The Paso Robles Zin is dubbed Double Dutch, while Howell Mountain is called I Spy Zinfandel. Rockpile grapes are made into Cat’s Cradle Zin, while grapes from the Russian River Maffei Vineyard go into Tug ‘O War.

When we tasted the wines, matched with food at the debut party, the 2016 vintages were drinking well and complemented the food nicely. There were four food stations at the party. No. 2 featured Velvet Piopino Mushroom Coq au Vin Burdock “Root Bacon.”

Station 3 featured our favorite, Overnight Roasted Pork Shoulder with Jasper Farm Blue (cheese), Saba, Orange and Pomegranate. It was a wonderful blend of flavor and texture. 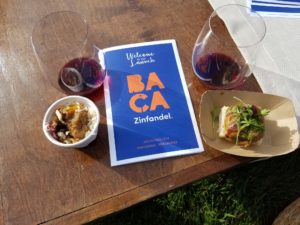 Zins were paired with food

For the Hall/Walt labels that make more than 100,000 cases per year, BACA is starting small. The first production of the four Zinfandels total only 800 cases so it is expected to sellout quickly. They are priced at $50.

Visitors to the St. Helena Hall Winery can visit the BACA Lounge Fridays-Sundays to taste the four Zins. Reservations are recommended for BACA and are a good idea for any of the three Hall/Walt facilities.