In downtown San Francisco for a night, we skipped the restaurants in the hotel or within walking distance and headed instead for a delightful neighborhood place, ChouChou in the Forest Hill neighborhood.

Located at 400 Dewey Drive, the owners bill it as a French bistro and they were right on.

It’s a narrow, store – front on the corner of Dewey and Laguna Honda Boulevard below the hospital, with room for just two rows of tables along the walls.  There’s parking for a few cars in the lot, otherwise you’re hunting for spaces in the neighborhood—do so, the food is worth it.

We used a Groupon that offered two entrees, two glasses of wine and a dessert to share—it was a bargain. The menu is focused on French Provencal entrees and appetizers with a bit of a California spin. What was striking is how many entrees are offered and, on a Sunday night, there were four specials offered by owner and chef H. Michaels

I opted for the New York steak topped with green peppercorn sauce, accompanied by asparagus and mashed potatoes. The steak was cooked perfectly and was delightful. My wife went for the seared shrimp in a garlic butter sauce over haricot vert (French-cut green beans) with a cheesy polenta. She absolutely raved and said it was simply the best shrimp dish she has eaten in a restaurant—that’s saying something.

Other entrees ranged from seared boat scallops with a leek fondue to boeuf bourguignon, a grass-fed filet; lamb chops and a leg of duck. Service was quite speedy and we observed nothing but satisfied smiles. Entrees ranged from $25 to $30. 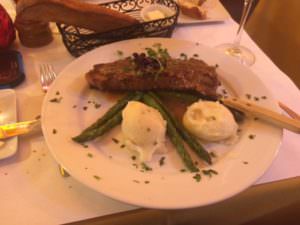 Notably, the bistro offered a restaurant week lunch and dinner year-round. A three-course meal with selections from most of the menu was $25 for lunch and $40 for dinner.

ChouChou was about a 25-minute drive without traffic from the financial district, but the food and atmosphere were well worth the trip.