I completed the grand slam of former military golf courses in the Bay Area this week when we ventured into the fog belt of San Francisco to play the historic Presidio course.

Dating to 1895, the course was built when the U.S. Army had a garrison at the Presidio in the city. It’s now operated by the Presidio Trust as part of the Golden Gate National Recreation area. The other former military courses in the broader Bay Area are Mare Island on the former Navy base in Vallejo and the Bayonet and Black Horse courses on the former Army Fort Ord on the Monterey Peninsula.

Ironically, although the Presidio is quite close to the ocean and foggy many months a year, there are no ocean views. Those are found at both of the Monterey courses as well as San Francisco Bay views at Mare Island. It would be interesting to play the course again in the ideal fall weather when the fog recedes or on a nice winter day.

The historic course has been played by Presidents Dwight Eisenhower and Teddy Roosevelt as well as legendary pros Byron Nelson, Ben Hogan and Arnold Palmer for whom a room in the clubhouse is named. 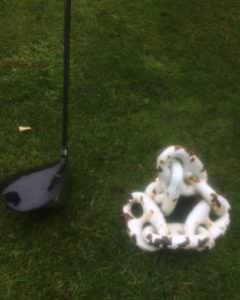 The course was in excellent shape with the greens on the back side rolling well (the front side greens were punched the morning we played and still were playable). Sand traps, most surrounded by uncut gnarly grass, also were in good shape with the exception of a couple with standing water. Those are set for updating in the fall.

The course is walkable, but it is set on the west side of one of San Francisco’s famed hills so you will get a workout. The carts are equipped with GPS and the staff takes full advantage of that to enforce the no carts on the fairways inside 150 yards (carts shut down as I found out trying to cut a corner on No. 1). For folks who want precise yardage inside 150 yards, download the free Presidio golf app.

The starter pointed out that the yardage on the card is deceptive because 13 of the holes play uphill so the 6,475 yardage from the tips is 400 to 500 yards longer on the course. Add in the heavy, moisture-laden air and you will need your driver. In addition, miss the fairway and the lush rough readily swallows your ball. We spent more than a few minutes looking for balls in the rough a few yards off the fairway.

The fairways are tree-lined, but there’s generally enough room between the trees to play back toward the green. When the fog lifts, it’s a scenic course tucked among homes, business and streets of San Francisco.

The hillsides also mean there are plenty of uneven lies from the fairways and rough alike.

There are no water hazards on the course and just a couple of forced carries on par 3s. The downhill No. 8 stretches to 219 yards from the tips and requires a long and accurate tee shot to hit the green perched on a hillside. There are a number of challenging holes, but nothing comes to mind as the “signature hole.”

The clubhouse is a refurbished building dating to the military’s use of the Presidio and features the Café, the Palmer room (for small gatherings) as well as the pro shop. The café serves American comfort food for breakfast and lunch and offers a full bar.

The most dramatic building is the private golf club that faces the 18th green. 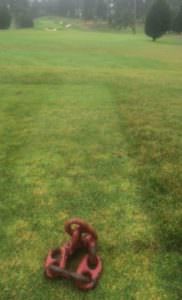 Although the historic clubhouse is classy, the course has a muni-feel to it, despite its resort course pricing. San Francisco residents can play with carts for $67 during the week or $82 on the weekends, while NorCal residents (this covers a broad swath) pay $84 or $105 (weekends). For visitors, it’s $125 or $145 on the weekends. Range balls are included.

Those rates are close to those at TPC Harding Park, the city’s showcase public golf course and the site of the President’s Cup, the Cadillac Match Play and other tour events. Bay Area residents can play Harding for $92 during the week or $102 on the weekends ($54 and $68 for San Francisco residents), while visitors get socked at $157 and $177.