Golfers looking for a links style golf experience have to look no further than the eastern Livermore Valley Wine Country and the Poppy Ridge Golf Club owned by the Northern California Golf Association.

The association commissioned Rees Jones to design the 27-hole complex.  His brother, Robert Trent Jones II, designed the first NCGA course, Poppy Hills in the Del Monte Forest at Pebble Beach that opened in 1985. The Livermore location, with Delta water provided by a turnout on the nearby aqueduct, is within about a one-hour drive for about 90,000 association members. 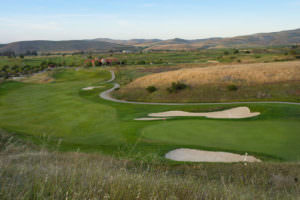 Rees Jones had a blank landscape of 200 rugged acres with ridges and ravines and nearly 300 feet of elevation change. There was just one tree on the property, a valley oak that stands alongside the fairway on Chardonnay No. 8. More than 400 trees were planted on the property, although it’s the volunteer cottonwoods in the creeks that have grown the best. They require occasionally trimming to give golfers an open shot.

Jones moved millions of cubic yards of dirt to shape the three nines that today provide each provide a golfing challenge.

Jones added ponds so all three nines finish beneath the Hacienda-style clubhouse on greens guarded by water. He also brought water into play as creeks and ponds on other holes.

General Manager Todd Cook, the first employee as the superintendent at Poppy Ridge 22 years ago, recalls just how much dirt was moved to create the course. The 27 holes allow one nine to open later each weekday so the maintenance crews can get their job done. Cook said it took a while to figure out how most efficiently operate the starting times. When it first opened, they started all three nines at once–now they stagger starting times. Nick Abbott manages the tee sheet and deserves the credit for keeping things moving well. 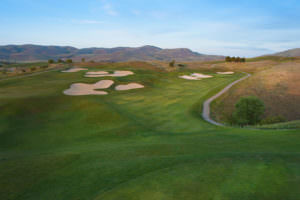 The course, along with its sister course Poppy Hills in Pebble Beach on the Monterey Peninsula, is owned by a for-profit subsidiary of the Northern California Golf Association. The board expects both golf courses to break-even, at the minimum, if not contribute funds to the organization.

With rounds down from averaging 90,000 per year to between 55,000 and 58,000 since the Great Recession, Cook invites NCGA members to take advantage of their club. Members can play during the week for $60, while seniors play for $45 with a cart—a great value at a course at a challenging and well-maintained track that

For a number of years, Poppy Ridge has built up its food and beverage business. It’s a favorite lunch spot for employees at Lawrence Livermore and Sandia national labs. About 40 weddings take place annually, which close the grill and the patio. The patio is ideal for enjoying a post-round libation and lunch. It’s open for breakfast on the weekends.

The patio overlooks the closing holes on all three nines. 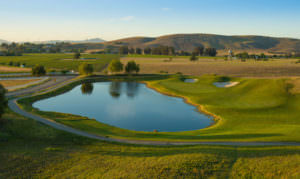 This winter’s torrential rains tested the drainage, but Cook said it worked as designed. Once the water ran off into the creeks and ponds, fairways were playable with minimal standing water.

The NCGA updated the ratings on the courses last year and they were virtually the same (ranging from 74.8 rating with a 135 slope to a 74.5 with 137).

The Chardonnay nine features several holes with plenty of elevation change and it varies from running along ridges to down in the lower points on the course. It opens a 396-yard uphill par 4 that is followed by a short 305-yard par 4.  From the highest point on the property, No. 3 plays 80 feet downhill at 219 yards from the tips. Coming up short in the front bunker can result in a plugged lie.

The par 4 No. 8 (470 yards that often is into the wind) features the original valley oak on the left side, while a creek runs the length of the hole on the right, separating it from Zinfandel No. 8. 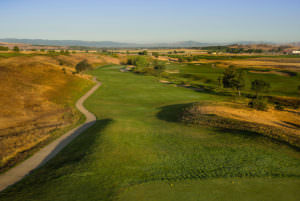 It closes with a 526-yard par to a green guarded that the pond that also borders Zinfandel 9.

Merlot runs along the ridges and is the most exposed to the typical afternoon winds in Livermore. As Cook pointed out, there’s a reason that windmills stand on a couple of hills visible from the clubhouse.

The first four holes play on the southwestern edge of the property and the routing stays entirely south of the clubhouse and parking lot until the ninth hole. No. 1 plays uphill into the prevailing winds at 372 yards.

Like on the other nines, there is plenty of slope on the greens and, if they are running at normal quick speeds, you do not want to be above the hole.

There’s a great contrast between No. 6 that runs along a ridge with out-of-bounds left and a ravine right with a fairway that narrows to about 20 yards at its neck; and No. 7 that runs uphill through a little valley. 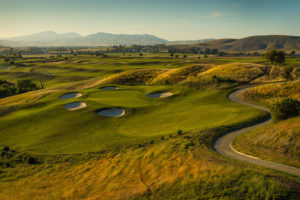 Merlot finishes with a 524-yard par 5 back into the wind with a pond in play on the left for the final 200 yards to the green.

Zinfandel continues the uphill first hole routing at 372 yards. There is no short par 4 on this nine—No. 1 is the shortest. It is followed by a downhill 198-yard par 3 that plays over a lake.

No 8 is a 528-yard par 5 with three fairway bunkers on the right side and a creek down the left. The creek runs in front of the green and then around to the right side. Zinfandel finishes up with a 452-yard downhill par 4 to a green guarded by the pond that it shares the ninth green at Merlot.http://www.poppyridgegolf.com