The Scottish Highlands, which run north from Glasgow, are the hotbed of Scottish distilleries.

There are about 120 distilleries in Scotland and several are located around the seaside city of Inverness. Suffice it to say, you can sample and tour to your heart’s content and not come close to covering them all.

While in Inverness, we toured Glenmorangie, a single-malt brand that I first tried when it was the official Scotch of The Open Championship a few years ago. The distillery, with stone warehouses dating back to the mid-1800s, sits on the shore of the Dornoch Firth in Tain, 36 miles north of Inverness. It was founded by William Matteson in 1843—the 1800s were an amazing century for establishing single-malt whisky distilleries across Scotland.

It’s situated on the slopes leading down to the firth. With the surrounding grounds, it’s a genuinely peaceful spot.

We took the Signet Tour (35 pounds, about $54) that had elements similar to the tour we took earlier at Laphroaig on the Isle of Islay. We were able to taste the “beer” and the “wine”, the two stages of malting the barley in huge steel containers (washbacks) before it’s finished as spirts in the huge stills. Glenmorangie prides itself on the tallest stills in Scotland which its managers believe leads to its smooth taste. The original 10-year-old Glenmorangie is aged in American white oak bourbon barrels that also contribute to the smooth, fruity flavor.

One other Glenmorangie difference is the water. Whisky masters here, unlike those at other distilleries, intentionally use hard water that is filled with minerals after filtering through limestone. It’s piped directly from the Tarlogie Springs, situated on the Tarlogie Hill.

The distillery is located on the coast

Traditionally, 16 men were involved in the production of the whisky. With two additional stills added after Louis Vuitton Moet Hennessy bought the distillery in 2004, it can produce up to 6 million liters annually. Thanks to automation, there’s still only 23 men involved in the production. It has a sister distillery, Ardbeg, located on the Isle of Islay that makes a smoky whisky derived from peat-fueled fires.

Although the Scottish whiskies started as family-owned enterprises, most are now part of large corporations. Diageo, known for its Johnny Walker family of blended scotch, owns 26 single-malt distilleries.

After visiting the oldest barrel warehouse on site at Tain, where the whisky spends 10 or more years maturing in the barrel, we stepped into the Signet room for a private tasting of three whiskies. We started with the 10-year-old original and then enjoyed the signature Signet accompanied by an audio recording that cracked up my ladies with its over-the-top language such as the “voluptuous legs,” the whisky shows on the side of the glass. Signet retails for $200 a bottle so that was a treat. 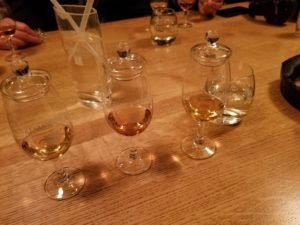 Glenmorangie was a pioneer in using casks other than former bourbon casks to further age its whiskies. After spending 10 years in bourbon casks, selected whiskies are aged for another two or more years in casks that once aged sherry, port, Madeira and sauterne. Many distilleries have followed suit so port and sherry casks are widely used for special blends.

The distillery celebrated its 175th anniversary by moving ahead with two major projects—a multi-million new still buildings for two additional copper stills and a partnership to bring oysters back into the Dornoch Firth. The first two trials went well with the oysters flourishing and the partnership hopes to re-establish oysters on three man-made reefs. Glenmorangie also built an anaerobic digestion plant to purify discharges from the distillery into the firth. The goal is about 100 acres of reefs with millions of oysters.