Writing about a golf course in Scotland with a local Northern California owner is one thing.

Playing it and then writing about it is truly another. I had that opportunity when we toured Scotland and finished up at St. Andrews, the home of golf. Our visit included a round at the Kingsbarns Golf Links, located about seven miles on a country road from St. Andrews. It’s owned by Art Dunkley, a long-time resident of Pleasanton in the San Francisco Bay Area.

While in St. Andrews for three nights, we had the opportunity to walk the Old Course on Sunday when it’s closed to golfers and open to anyone to take a stroll. 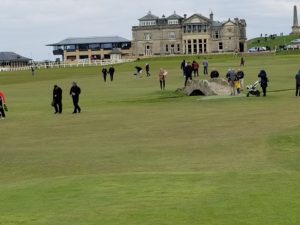 Swilcan bridge on Old Course No. 18

Course managers adjust for the walkers by putting a flag off the 18th green so people can have their photos taken with the R&A Clubhouse in the background. Timing and handicaps did not permit trying to get out on the Old Course (requires a handicap of 24 for men and 36 for women). It’s one of seven run by the St. Andrews Trust so there are other choices, but the Sunday walk, including a stroll over the Swilcan bridge, was delightful. It took me back to watching The Open Championships on the Old Course as well as the Alfred Dunhill Championships (the European Tour’s version of the AT&T National Pro-Am).

The Dunhill, like the AT&T in Carmel, is staged on three courses for three days with pro-amateur teams before a cut brings the final round to the Old Course.

Ironically, the course most similar to Pebble Beach hosts the earlier rounds—Kingsbarns Golf Links that is sculpted out along nearly two miles of North Sea coast. It features ocean views from many tees and greens and has several holes that run right along the coast. The pictures on the website are great, but they cannot capture the majesty of the scenery. Those ocean views were what attracted Art Dunkley and Mike Parsinen to the farm that was operating on the land. It was two flat parcels that stepped down to the coast. 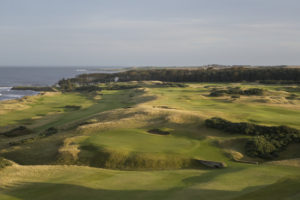 Art and Mike enlisted Kyle Phillips, unknown at the time although he had understudied with Robert Trent Jones, to design the course. He took the flat land and, after moving 800,000 tons of dirt later, sculpted it into a dramatic golf course with plenty of contours. Looking at it today, 19 years later, golfers have no clue that it was once flat land.

Chatting with Alan Hoag, the chief executive of Kingsbarns, he pointed out how they strive for exceptional service and to make it easy on the golfers. The overall goal is to be No. 2—the second round played while golfers are staying at St. Andrews, presumably to play the Old Course. Getting out at St. Andrews is challenging—there are prepaid expensive bookings with golf trips; an annual draw that is taken every August, and then the two-day in advance draw. 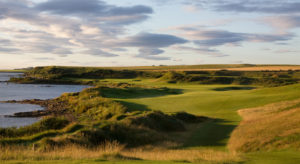 Hoag readily admits their goal—think of AVIS—is to be No. 2—the second must-play course in the St. Andrews area. There’s plenty of competition with six other trust golf courses plus two at the Fairmont resort hotel.

Given the overwhelmingly positive response by golf publications, iconic pro golfers (Arnold Palmer and Tom Watson) and golfers at-large they have succeeded probably beyond their expectations. They have put together a premium priced alternative that golfers love. Green fees at the Old Course are 190 pounds in prime season, while Kingsbarns’ are 288 pounds. Add in a caddie for 75 pounds with tip (a great choice—be sure you use a caddy on your first round and perhaps others) and it’s a premium priced experience that golfers line up for. The tee sheet for 2020 already is about 70 percent booked. 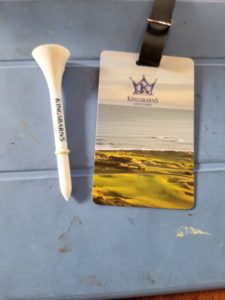 That’s how well Dunkley, Hoag and their team have succeeded. It all started with detailed market research to determine whether an alternative course would succeed and then with Phillips’ exceptional design on coast-side real estate. Hoag told me that he chatted with Sir Nick Faldo on a business trip and Faldo told him he had checked out the parcel flying over it in his helicopter and decided, because it was flat, that it was not suitable for a links course.

When we played, we started on a crisp overcast morning with temperatures in the low 40s and a bit of a breeze. The high was predicted for 49. Mid-way through the front nine, the sun was out and it would shine for the rest of the round and temperatures climbed into the mid-50s, the best day we saw in two weeks in Scotland. Notably, my caddie Doug pointed out Carnoustie across the Bay of St. Andrews when it was getting rain showers. He said the nasty weather often skirts the Kingsbarns site, although everyone is prepared for rain showers. 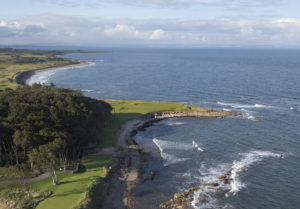 Phillips’ design includes plenty of challenging par fours, but he had fun with short par threes. No. 15 runs right along the coast with shoreline bordering more than half of the green short and right. That invites bailouts to the left (we complied) and we had the advantage of playing it late morning when the tide was out. It would be much more daunting with the tide in and water lapping around the edges of the green.

As we made our way around the 18 holes, I paused many times to simply gaze out at ocean over the golf course with the yellow gorse in full bloom. The views are striking and match any course I’ve played, including Pebble Beach and some Hawaiian coast-side courses. (Note: I have not played the Bandon courses in Oregon).

The bottom line is simple: Kingsbarns is the second must-play course in St. Andrews. We only had one day to play and were delighted to spend it at Kingsbarns, including a tasty post-round lunch with a ham-and-cheese toastie and a bowl of spicy and delicious Scottish chili coupled with a cold beer and a dram of single-malt. Incidentally, Kingsbarns bottles its own Highland single-malt available by the dram, small bottle and 70 ml bottle in the bar and on the course.