Heading to downtown Pleasanton on a hot Sunday evening to celebrate our daughter’s birthday, we decided to try Elia, the upscale Greek restaurant located in the space Stacey’s occupied for years.

The white tablecloth dining room, surrounded by ample patio space on two sides, is classy and reminiscent of the whitewashed walls of Santorini. It matches the upscale menu and pricing. The wine list is expansive with Greek, other European, California and Oregon selections. It has more three-digit bottles than any other restaurant we’ve patronized on Main Street. Having checked the wine list earlier, I had selected a bottle to bring from home and managed to leave it sitting on the counter. So, we decided to have cocktails. 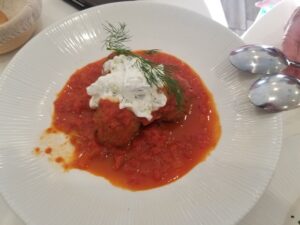 My daughter’s gin and tonic came with Empress gin, a unique indigo liquor that turns lavender when mixed, and juniper berries as a garnish. It was showy and tasty. I paid more for a double shot of top-shelf bourbon that I’ve paid in any other Main Street restaurant by a significant amount. Alcohol typically is a profit center, and the Elia proprietor certainly follows that pattern.

The seasonal menu offers 16 starter choices so we decided to order several to see what the kitchen could do. Entrees are priced from $28 (skewered chicken thighs) to $39—$44 for salmon, filet mignon souvlakii, lamb shank or lamb chops.

We started with three good-sized tasty meatballs and made sure to mop up every drop of sauce with Elia’s homemade bread. We’d definitely order this again. Not so for the stuffed grape leaves. The four tubes were fine, but uninspiring and among the smaller grape leaves you’ll find.

That wasn’t the case for the brandy flamed Saganaki kefalothiri cheese, served in a metal skillet fresh from the oven. Great show when the server set it aflame and then chewy and enjoyable bites with more of the unlimited fresh bread. It also went on the order again list.

Traditionally, we like to start with breaded calamari. Elia’s came from Monterey Bay. The dipping sauce had quite the pepper bite and, as with others, this was not a large portion. With the exception of the cheese, that was pretty much the case across the board-and we would have eaten more cheese had the serving been bigger. 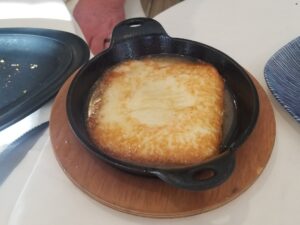 The lamb riblets were a mixed bag. A couple were nearly all meat with very little fat, while others missed the fat pruning in the kitchen. They were flavorful and a nice addition to our choices.

Another starter was the traditional phyllo dough stuffed with feta and spinach. Serviceable but nothing to write home about.

We passed on the traditional Greek yogurt dip and hummus. Other choices were Ahi tuna, shrimp, smelt and grilled octopus, one large tentacle as the various social media pictures show.

For dessert, we selected the traditional pistachio baklava that lived up to its billing. The phyllo dough wrapped custard in the Greek version of cannoli also went down easily, but the favorite was the cheesecake made with Greek yogurt. It was light and complemented perfectly by berry coulis. Typically, I am not a cheesecake fan—crème brulee, tiramisu or panna cotta are my usual choices—but this easily topped the list.

Elia serves brunch on the weekend and lunch and dinner daily. Reservations are recommended.